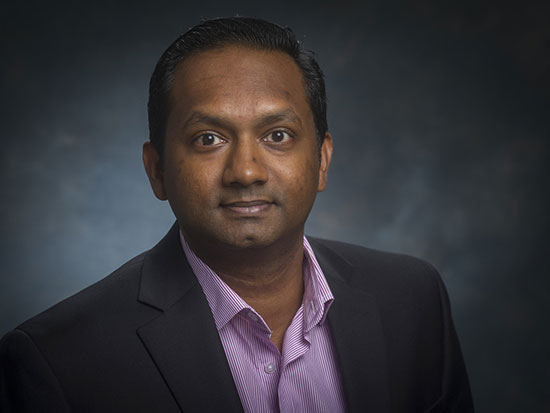 A faculty member looking to build a successful research lab has to be a good recruiter and a good scientist. Making progress requires convincing graduate and undergraduate students to join your team — and nothing works better than the prospect of intellectually exciting work on important problems.

Kannatassen “Krishen” Appavoo, Ph.D., assistant professor in the Department of Physics, designs, builds and studies electronic nanomaterials using lasers. His work could lead to new types of energy efficient materials, such as light-emitting devices, sensors and solar panels. It is highly technical, of course, but Appavoo excels at explaining the math and science in ways that capture the imagination. His teaching in courses that range from undergraduate physics to introductory quantum mechanics for graduate students resulted in Appavoo’s selection as the 2019 President’s Award for Excellence in Teaching recipient from the Honors College.

Appavoo’s description of his work — using lasers to study new types of nanomaterials and their optical properties — enthralled Casey. “He talked about how his work applied to solar technologies,” Casey recalled. “He was so passionate about his work that I was intrigued.”

Excitement in an empty lab

One of Appavoo’s nominating letters for the Excellence in Teaching award came from a student who has been a part of Appavoo’s lab since his freshman year. “The first time he showed me the lab it was empty: there was no equipment and no supplies,” the student wrote. But Appavoo was able to paint a mental picture of all the work that he had planned. “He was so excited about his future here at UAB, I would have to slow him down in his descriptions of materials and projects to understand all he had in mind,” the student continued. “Now, three years later, Dr. Appavoo has two laboratory spaces filled with equipment that continuously runs different experiments” in projects with partners at the Department of Energy’s national laboratories as well as collaborators at the College of Arts and Sciences and School of Engineering.

Appavoo’s enthusiasm and ability to explain difficult concepts “sparked a passion for physics,” the student said, “that I didn’t even know was there.”