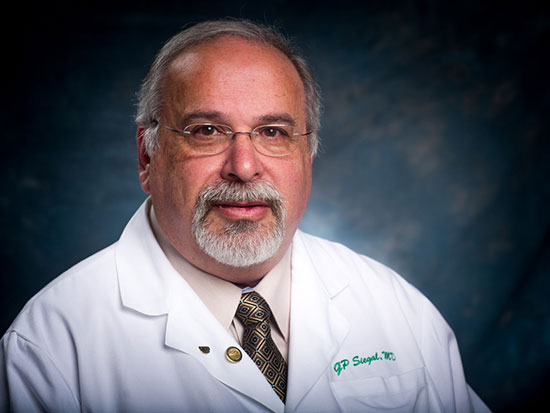 Gene Siegal, M.D., Ph.D., interim chair of Genetics and executive vice chair of Pathology, is one of 20 distinguished researchers nationwide who have been named as the inaugural Sigma Xi Fellows by Sigma Xi, the international scientific research honor society.

Siegal, who is the Robert W. Mowry Endowed Professor of Pathology at UAB, was selected for his distinguished contributions as a physician scientist, scholar and leader in academic medicine. He is an experimental and diagnostic pathologist whose research is focused on cancer biology. His clinical research interests have centered on studies of bone tumors and related conditions, a field in which he is a recognized world authority.

Siegal has been a member of Sigma Xi for more than four decades. "With the challenges facing science in general and Sigma Xi in particular it became clear to me that it is once again time to come forward to support this eminent society which was so important to my own success and sense of self-worth and assure its stabilization and growth into this next century," Siegal said.

A member of multiple honor societies, Siegal is a Fellow of the Royal Society of Medicine, London, and Phi Beta Delta, the Honor Society for International Scholars. He currently serves on the Omicron Delta Kappa National Leadership Honor Society and Educational Foundation Board of Trustees. He has published more than 700 peer-reviewed manuscripts, book chapters, abstracts and other professional writings, along with nine books. He is the current editor-in-chief of Laboratory Investigation and is the 2019–2020 president of the American Society for Clinical Pathology.

The inaugural Sigma Xi Fellows will be recognized during the group's virtual Annual Meeting and Student Research Conference, November 5–8, 2020.