‘Office Mother’ Harbin takes care of the staff of the ARU

Frances Harbin has been working in the Atherosclerosis Research Unit (ARU) for the past nine years, and many within the unit long have thought of her as the office mother. 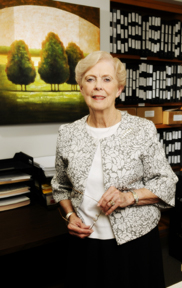 “I’ve been called that from time-to-time,” she says, “and I do worry about everyone.”

Harbin, an office associate II in the Division of Gerontology, Geriatrics and Palliative Medicine, recently found herself in that role again. Tamara Keenum, a research technician in the division, passed out during a lab meeting one recent morning. She was frightened by the incident and went to Harbin to ask for help.

“Ms. Frances is the sweetest, most caring person I’ve ever known,” Keenum says. “She always takes time to check on others and see how they’re doing. When I had my slight medical complication, Ms. Frances took care of me. She’s the best office mother anyone could have.”

“I called her grandmother and mother and tried to get in touch with everybody to let them know she wasn’t feeling well,” Harbin says. “If anyone gets sick, I try to help them. I just do whatever anybody needs me to do.”

Harbin’s generosity, integrity and strong work ethic are a few reasons why she has been selected June’s Employee of the Month.

Whether it’s filing papers, typing letters, managing schedules, placing purchase orders, helping with grants — or playing the role of office mother — Harbin has proven no job is too big for her to handle, co-workers say.

G.M. Anantharamaiah, Ph.D., professor and associate director of the ARU, says Harbin is an exemplary employee who easily disseminates information to others in the research unit and has taken a leadership role managing the affairs of the group.

“Ms. Frances is my secretary, but also much, much more,” Anantharamaiah says. “She attends to the work to be carried out for six other faculty in the ARU. Despite a challenging workload, Ms. Frances always is smiling and friendly. I’ve not seen her get upset with anyone for any reason. Our staff thinks so much of her that’s it’s not unusual for most everyone to make it a point to see her each morning and spend five minutes with her before they start their work. I have never come across as kind-hearted a person as Ms. Frances.”

Harbin has spent most of her life in the work force, whether it was at the family-owned Superior Tire in Anniston, in public relations at Children’s Hospital or at the Jack’s corporate office. When she is not working she enjoys spending time with her three children, five grandchildren and one great-grandchild.

“I’ve had several jobs in my lifetime,” she says, “but God has blessed me by allowing me to work with Dr. Anantharamaiah, and the faculty and staff in the Atherosclerosis Research Unit. I have really enjoyed working here because the people are so supportive, genuine and so nice.”

Medha Manchekar, Ph.D., an instructor in the division, says the contributions Harbin makes to the department are numerous. One of those, she says, is her persistence. Manchekar says she always is proactive and a step ahead in anticipating the needs of the office.

“Her work ethic is admirable,” Manchekar says. “Ms. Frances is one of the most diligent, reliable, persistent and patient office associates I have worked with. She rarely takes a day off. When she does plan to take vacation, she makes sure everyone’s needs are taken care of prior to leaving. Ms. Frances joined our multi-national, multi-cultural group nine years ago, and she made us her family.”

Harbin says she hopes to retire next summer and move back to Anniston to spend time with her family and pursue one of her greatest loves — shopping at antique stores.

In the meantime, Harbin says she’ll continue to help her co-workers.

“I really didn’t know when I started to work at UAB that I would be here 10 years,” she says. “But this is a wonderful place to work, and I’m glad they like me and think so much of me. I am deeply touched and honored that I have been selected June’s Employee of the Month.”