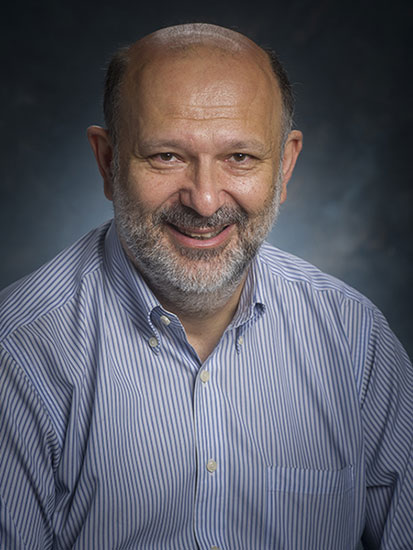 Vladimir Parpura, M.D., Ph.D.When he first submitted the results of his pioneering brain experiments to the journal Nature in 1993, Vladimir Parpura, M.D., Ph.D., got a flat rejection. Scientists had long known that, in addition to the 100 billion-odd neurons in the human brain, there is a roughly equivalent number of cells called neuroglia. These supportive cells, whose name derives from a Greek word perhaps best translated as “slime,” were thought to be essentially passive. But in the early 1990s, Parpura — then a young researcher at Iowa State University and now a professor in the UAB Department of Neurobiology — demonstrated that neuroglia were in fact communicating with neurons by releasing a neurotransmitter called glutamate. “At the time, it was heresy,” Parpura said.

After Nature turned its back, Parpura submitted his paper to Science, which described it as “interesting and important” but rejected it nevertheless. So did Neuron. It took two years and three revisions before the work was accepted by the Journal of Neuroscience. Nature was more receptive to Parpura’s paper on a parallel set of experiments, publishing this article in July 1994.

“Thus the concept of gliotransmission was born, to occupy gliologists’ minds since, with numerous debates and controversies,” write Alexei Verkhratsky, Ph.D., and co-authors Arne Schousboe, Ph.D., and Robert Zorec, Ph.D., who are guest editors of a special edition of the journal Neurochemical Research published in September 2021.

The special edition is titled the Vladimir Parpura Honorary Issue, and the papers included “reflect in many ways the significance of the work of Vlad,” the guest editors write. “Many of the authors have benefited from his contributions.” Parpura is senior author of an article in the issue, Two Metabolic Fuels, Glucose and Lactate, Differentially Modulate Exocytotic Glutamate Release from Cultured Astrocytes.

“Thus the concept of gliotransmission was born, to occupy gliologists’ minds since, with numerous debates and controversies.”

Ever since his initial discoveries, Parpura has been a leading gliologist. “He studied secretory molecules in astrocytes and glial signaling in Caenorhabditis elegans, he researched TRP channels and mitochondrial Na+-Ca2+ exchanger, he analyzed pathophysiology of glia in animal models of neuropsychiatric and neurodegenerative diseases, and he studied interactions between carbon nanotubes and neurons and astrocytes,” the guest editors explain.

In 2017, Parpura was elected as a Fellow of the American Association for the Advancement of Science. Two years later, Parpura and co-authors published the book “Neuroglia in Neurodegenerative Diseases,” which noted that neuroglia play a fundamental role “in most, if not all, neuropathologies,” he said. Also in 2019, he was named a council member of the International Society of Neurochemistry, just as he was finishing a two-year term as president of the American Society for Neurochemistry.

“If you are not curious, there is no science,” Parpura said on his election as an AAAS fellow. “If there is curiosity, you will be doing science.”