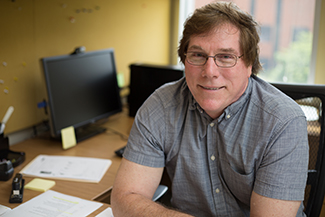 Douglas P. Fry, Ph.D., who had been living in Finland for nearly 20 years, had decided it was time to move back to the United States when he heard about a position at UAB.

Fry said UAB's Department of Anthropology interested him, as did the growth of the College of Arts and Sciences and its planned Institute for Human Rights, which was approved by the University of Alabama System Board of Trustees during its June 13 meeting.

“The more I learned [about UAB], the more excited I became,” said Fry, who recently was named the department chair. “The CAS strategic plan highlights diversity, globalism, values such as tolerance, respect and human rights. The new Institute for Human Rights is also explicitly mentioned in the strategic plan, and these goals, plans and values strongly appealed to me."

UAB’s new Institute for Human Rights is a universitywide interdisciplinary research center that will provide, foster and promote research, education and outreach activities that focus on the extension of human rights around the globe. Specific areas of interest include education, public health, environment and history as they relate to human and civil rights.

“I have worked for many years with peace, justice and human rights issues as a scholar and activist. I am happy and excited to join UAB where there are dynamic plans in the works,” Fry said.

Fry comes to UAB from Åbo Akademi University in Vasa, Finland, where directed the joint master’s program in Peace, Mediation and Conflict Research. He is a member of the American Anthropological Association, the International Society for Research on Aggression and the Peace and Justice Studies Association, among others, and co-editor-in-chief of The Journal of Aggression and Conflict and Peace Research.

His career has been focused on studying conflict management from an anthropological perspective, and he has published several books examining the ways societies can learn from those that do not make war with their neighbors.

In an interview with the Oxford University Press blog, Fry said he was greatly affected by the Cuban missile crisis as a child and that influenced his research interests. In his 2007 book Beyond War: The Human Potential for Peace, Fry argues that human nature is not essentially warlike.

“As a student, when I discovered anthropology I began looking at warfare from a macroscopic perspective that makes comparisons across cultures and over time,” Fry said. “Anthropology widens our view beyond our own culture and beyond current day events.

Fry said one of his departmental goals is to create a course of study that focuses directly on human rights and peace.

“Anthropology plans to work closely with the Institute for Human Rights,” Fry said. “We plan to make some additional faculty hires in the areas of peace, justice and human rights and are discussing, in a preliminary way, how to build up these topical areas within the department.”

Learn more about Fry and the UAB Department of Anthropology online.