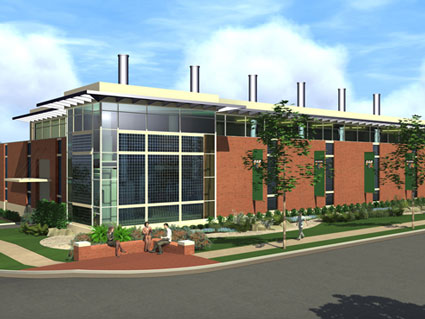 All of the underground steam and condensate pipe have been installed for the UAB District Steam System Project, and the plant is on pace to begin full operations in February 2013.

The $69 million project was first approved by The University of Alabama System Board of Trustees in June 2010 with a target start date of February 2013 — a date of necessity as Alabama Power Co. has long planned to shut down its existing steam plant early next year.

The new steam-generation plant will be located at the corner of Sixth Avenue South and 13th Street, across from Bartow Arena and adjacent to the existing Alabama Power plant. More than 20,000 linear feet of piping — the equivalent of almost four miles — has been installed under buildings and roads throughout campus for the new plant. All streets that were disrupted by the construction are now open, says Jim James, assistant vice president for Planning, Design & Construction.

“No further street disruptions or closures are planned,” James says. “There will be some final finish paving completed on a number of streets during the next month, but major construction is complete.”

Plans are in place for the steam plant to be “boiled out” the first week of January, a common process for newly constructed industrial plants. In this procedure, the equipment is brought up to operating temperatures and all final adjustments are made to the equipment prior to the start of full operations.

“Thirty five percent of the installed steam pipe is now actually hot and in use,” James says. “Additional pipe will be brought online during the next few weeks as the new steam pipe system is phased into service.”

The new distribution network will replace the existing steam system, and the new condensate-return system installed as part of the project will provide high-quality steam service to the campus, research and medical center facilities, including the UAB Callahan Eye Hospital, Birmingham VA Medical Center and Southern Research Institute. The new condensate-recovery system will result in energy savings and reduction of domestic water consumption, both of which support UAB’s commitment to sustainability.

Approximately 50 percent of the condensate return pipe has been installed to this point and is expected to be completed by the end of the January. The new condensate-recovery system will result in energy and water savings of approximately $2 million per year, an important part of UAB’s sustainability efforts.