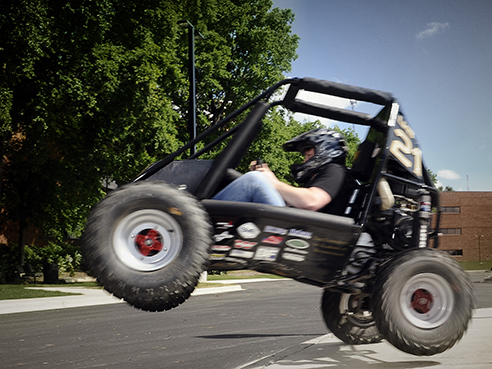 The pieces come from all over campus, which houses a first-class materials lab, a foundry, a custom fabrication shop and a computer numeric control lab. Then they are assembled by Blazer Motorsports, an automotive-design team of students, into a custom-designed, hand-built ATV ready for competition on the world stage.

This year, the competition takes place May 26-28 in Pittsburg, Kansas, and the team hopes to raise $10,000 to cover travel expenses for the car and the team. The Baja SAE is an intercollegiate competition run by the Society of Automotive Engineers that challenges students to design, test, build, fund, promote and race a single-seat off-road car using a uniform set of specifications.

“Each team designs a prototype car they want to convince an investor to produce,” said Steve Thompson, the mentor for the 2017 team and field project manager in UAB’s Department of Mechanical Engineering. 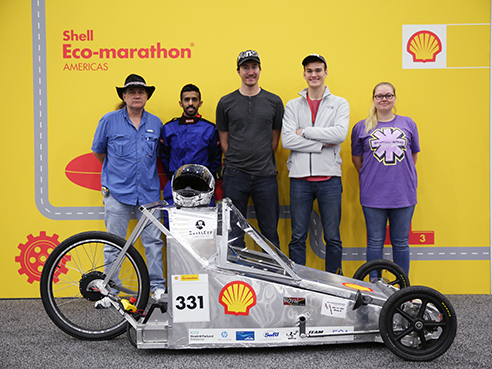 Steve Thompson (far left) and members of the Blazer Motorsports team also raced a car for the first time this year in the Shell Eco-marathon competition April 27-30, placing No.16. The seniors — Muhannd Aloqaybi, Aindreas Atanas, Jay Madison and Kaylee Harris — opted to miss their graduation ceremony to compete in the Eco-marathon.

Thompson has been at UAB for three years; he came to Alabama from Nebraska at the behest of Dean Sicking, Ph.D., a professor of engineering who previously worked at the University of Nebraska-Lincoln and would often use Thompson’s private custom-fabrication business for special projects. When he moved to Birmingham, that tradition continued — Thompson’s business built UAB’s state-of-the-art helmet-testing system, housed at Barber Motorsports and used to research brain injuries in football.

Unlike other mentors on campus, Thompson is neither an academic nor an engineer; in fact, Thompson had never worked with students before agreeing to head the Baja team. But he knows exactly what he hopes students can get out of the experience.

“The project teaches students how to turn concepts into reality — how to solve real-world scenarios, not just hypothetical textbook situations, then create a project and analyze it,” he said. “A lot of these students have never done these types of projects or have never used tools.”

Hands-on experience is indispensable in the job market, Thompson said, and he is passionate about helping Blazer Motorsports raise travel funds for the competition, which often brings the job market right to the students. Shell Oil, General Motors Corp. and Exxon Mobile are among the companies that often have engineers on the lookout for future graduates with promise at these events. This past year, a UAB team member was hired by GM after meeting one of its engineers at an event.

Thompson said the value of Blazer Motorsports extends beyond manually assembling a car to wider applications and opportunities for students of many disciplines. He added he hopes to raise up to $20,000 through the crowdfunding initiative to give the students an advance buffer for next year’s competition.

“People have this misconception that if you’re going to be on this team, it’s all just building the car, but that’s maybe 40 percent of it,” he said. “It’s all these other things people don’t realize. It’s way more than just building a car.”