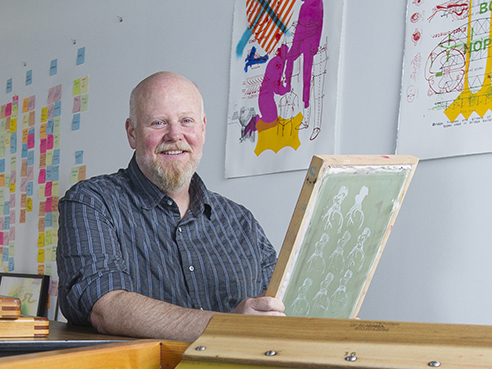 Doug Barrett, associate professor of graphic designWhen Doug Barrett, associate professor of graphic design, started a two-week residency at the Sam D. Hamilton Noxubee National Wildlife Refuge in Brooksville, Mississippi, in November, he wasn’t altogether sure why he was there. He knew he would make an art piece, but not what it would be or where the experience would take him, he said.

Earlier in spring, he’d been in the Hambidge Creative Residency Program studying long-leaf pine preserves in northern Florida and southern Georgia with Katerie Gladdys, associate professor at University of Florida. When the two ended up together again at Noxubee, Barrett had a rough idea of a way to use his skills to aid a nature preserve.

Barrett’s graduate-school study of mapping commuter spaces, signage and traffic flow — combined with a personal interest in nature — provided the opportunity to find a problem to solve, and his 20 years as a graphic designer provided the perspective to solve it. But first, he had to get to know his temporary home.

“They gave us keys to one of those weird government cars and said we could go anywhere we want [on the refuge],” Barrett said. “We drove almost every road and trail and walked many of the trails.” 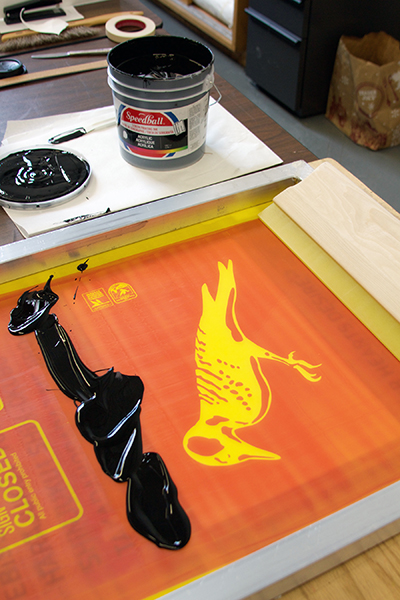 Barrett and Gladdys screen-printed the minimalistic signs by hand.Learning the environment

The Noxubee refuge is home to many types of wildlife, but most notable is the red-cockaded woodpecker, an endangered, black-and-white striped bird most commonly seen during the spring. The woodpeckers nest and find protection in active cavity trees, or trees that are dead or dying — a fact about the bird that got Barrett’s wheels turning.

Because the duo had studied pine trees months earlier, mapping how and where the long-leaf species are grown, Barrett said he felt comfortable tackling an idea that was part public service announcement, part art project.

“I already had the toolset as a graphic designer, so I wanted to create a poetic map of different things,” Barrett said.

Barrett and Gladdys created simple signs with an illustration of the red-cockaded woodpecker to denote trees that have been burned or are being allowed to die to create a habitat for the endangered birds. The locations of the signs, when observed comprehensively, create a poetic map of the woodpecker’s habitat within that section of the Noxubee refuge.


“To me, ‘visually poetic’ or ‘poetic mapping’ means visualizing by explaining, describing, illustrating or mapping abstract ideas or hidden processes in a way that inspires new understanding,” Barrett said. “This type of critical examination drives a broader agenda for change, growth and transformation in a way that builds understanding of the quality of a place, person or thing.”

A brochure created for the visitor’s center draws attention to the woodpecker’s plight and explains the use of signs within the refuge.

“People get upset when they see the forestry service doing burnings,” Barrett said. “The burn is about creating the habitat, not destroying it. We want to bring awareness to the woodpecker and how they’re trying to make this refuge a habitat.”

Another positive aspect of their project, Barrett said, is that the result is not a static piece of design that, once finished, is essentially abandoned. The signs and brochures will help create a better habitat for the red-cockaded woodpecker long after his residency is ended. The signs are made of biodegradable materials, and in time they will return to the land and wildlife they serve.

“We wanted to continue working,” Barrett said. “It’s not about the artifact made at the end. It’s more about the process of getting there.” 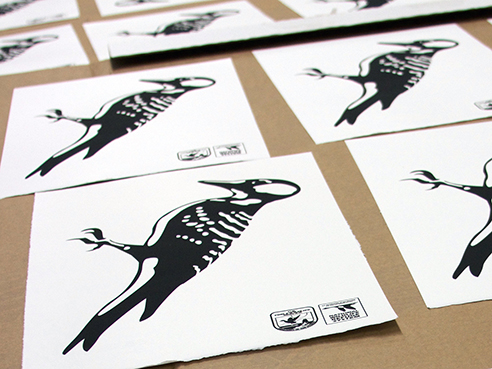 The finished productMapping the future

The woodpecker signs face a major road that runs through the refuge. The thought, Barrett said, is that even if visitors don’t get out of their car, they still can view the image of the woodpecker and learn more in the visitor’s center. He also hopes schools and youth organizations will bring students and participants to the refuge to learn more about the red-cockaded woodpecker and efforts to preserve its habitat.

“This could be a great teaching and educational tool,” he said.

He plans to carry what he’s learned back to the classroom at UAB as well — it’s a natural fit, he said, because many of his other classes already are incorporating some similar viewpoints. This semester, his ARS 495 BLOOM Studio class worked with the mayor of Irondale on a branding exploration; students also worked on safety signs for the UAB Culture of Safety campaign. In the past, his students have partnered with the Cahaba River Society on a license plate design, and he said he focuses many of his courses on the ideas of using “creative place-making” and using design for good.

“I feel that the mapping of the red-cockaded woodpecker habitat at Noxubee is right in line with my typical classroom and research trajectory of using the graphic design toolset to work on social, ecological and underserved community issues within the state,” Barrett said.