Table for 10,000, please: UAB Campus Dining has a lot on its plate for the World Games 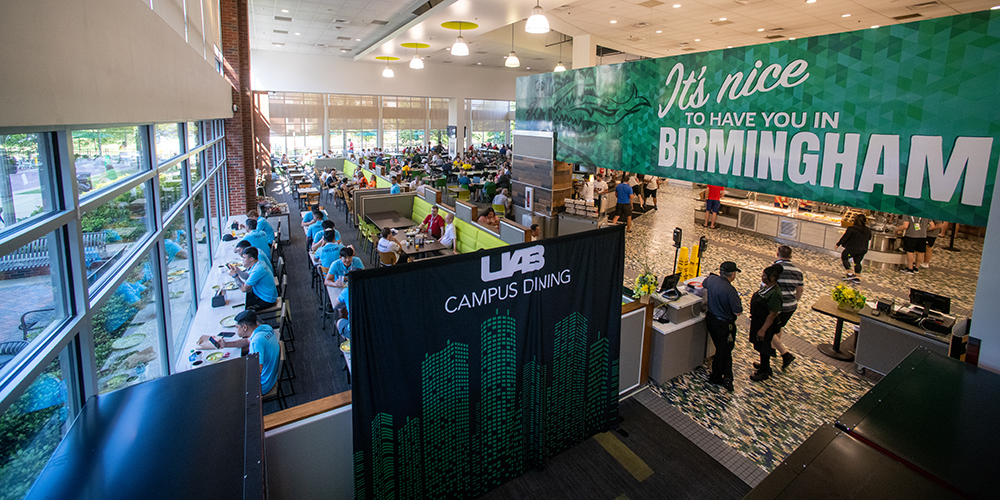 UAB Campus Dining has been given a tall order to complete during the World Games in Birmingham.

They must serve 10,000 meals to up to 3,400 diners per day, navigate labor and supply chain challenges and meet impeccable food safety standards, all while serving meals that are both delicious and nutritious.

How can they possibly do it? Simple. They have a secret sauce. A recipe for success, if you will. It calls for equal parts experience, efficiency, quality and taste, garnished with a side of good ol’ Southern hospitality.

Brian Bowser is UAB’s resident district manager for Sodexo, UAB’s food service provider, and he started prepping for the World Games more than four years ago. In fact, it wasn’t even his job at the time.

“I stepped foot onto this campus in June 2018, and I was already meeting in March 2018 with the onsite team,” said Bowser, whose resume includes working with both the World Equestrian Games and Winter X Games.

But that 2018 prep began with the idea that the World Games would keep its original schedule.

“You have to remember that originally the World Games was going to be in 2021; but when the Tokyo Olympics got moved, everything got shoved back one more year to 2022.”

So Bowser and his team turned the pandemic into a golden opportunity to make their plan for the World Games even better.

What exactly are their secret ingredients to success? Well, it’s really not that secret. You simply start with a heaping helping of location.

“We are uniquely positioned in the heart of downtown Birmingham,” Bowser said. “We have different venues all over campus. Not only do we have our resident dining space, the Commons on the Green, but we have 19 retail venues and a full catering company, and we have new facilities in the Hill Student Center and McMahon Hall that we can call on. So we are uniquely positioned to have more resources available to us so we can execute events such as this.”

All hands on deck 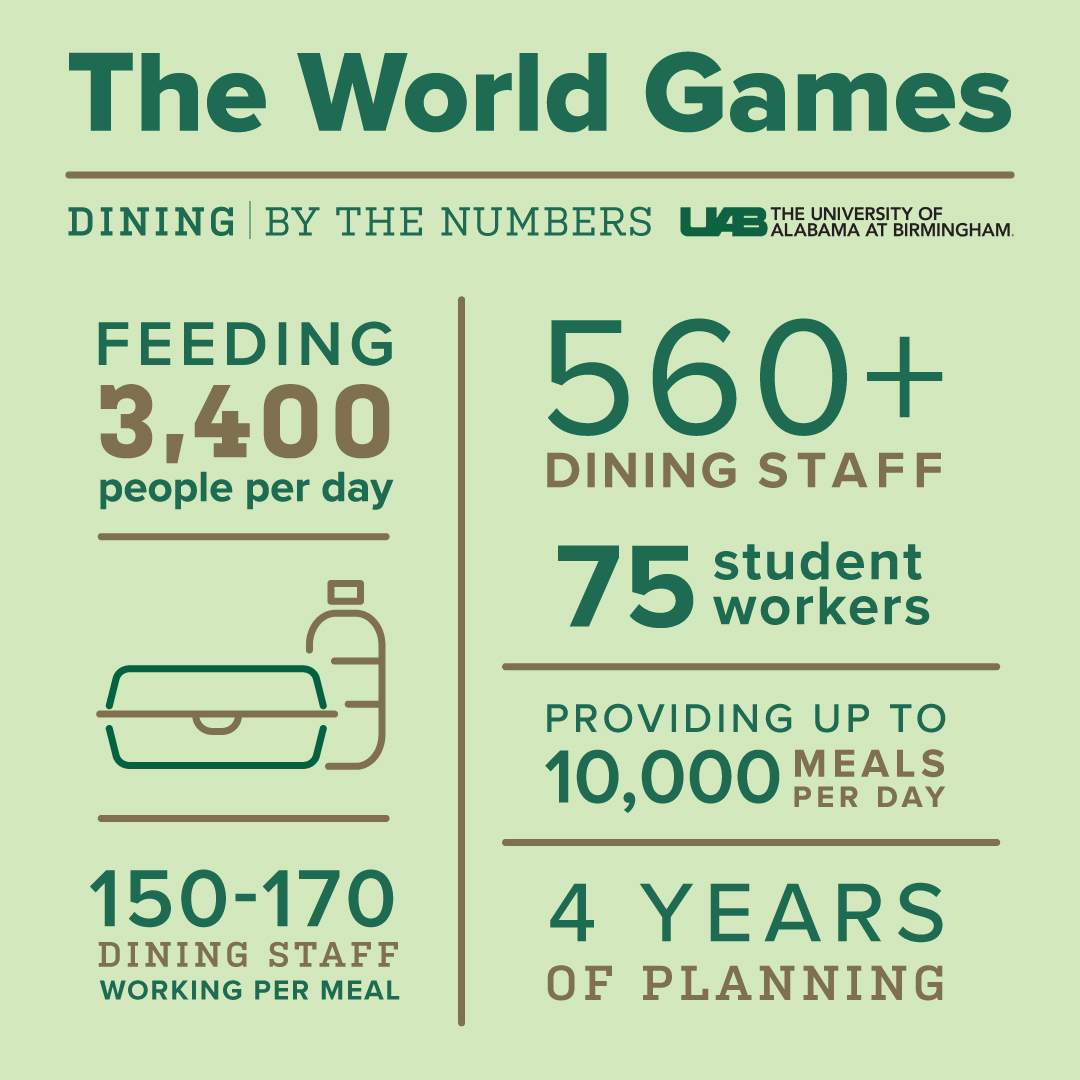 “We have a staff of a little more than 560, and we’re going to need every single one of them.” His team will be pulling personnel from every corner of UAB, he says. They’ll have upward of 150-170 hourly and salaried employees working for one meal.

“One of the things that I’m the most proud of is that we offer a lot of opportunities for student employment and retention as well,” he said. “We actually have 75 students who will be working with us during the World Games who are members of the Sodexo dining team.”

They even have Sodexo personnel coming in from other states. Allie Foster, executive chef for the Commons on the Green and Blazer Catering Co., says that due to their extended hours during the World Games, everyone has had to pick up extra hours.

“Typically, we only have two shifts, but now we’re going to have three,” she said. “Most of us are working additional hours. I don’t think anybody’s going to be working just 40 hours in five days.”

Bowser also credited the team’s support personnel: the general managers, executive chefs, catering directors, retail managers and others who are all bringing a wealth of experience to the table. And he isn’t the only one who recognizes the remarkable job being done by the UAB team. They’re receiving glowing praise for their food safety, hygiene and other protocols.

“What I am incredibly proud of is that, every step of the way, both the Jefferson County Board of Health and our FDA officials have said we have far surpassed their expectations,” Bowser said. “We are further ahead of entities that have done presidential debates, and even large-scale global events like the Olympics.” 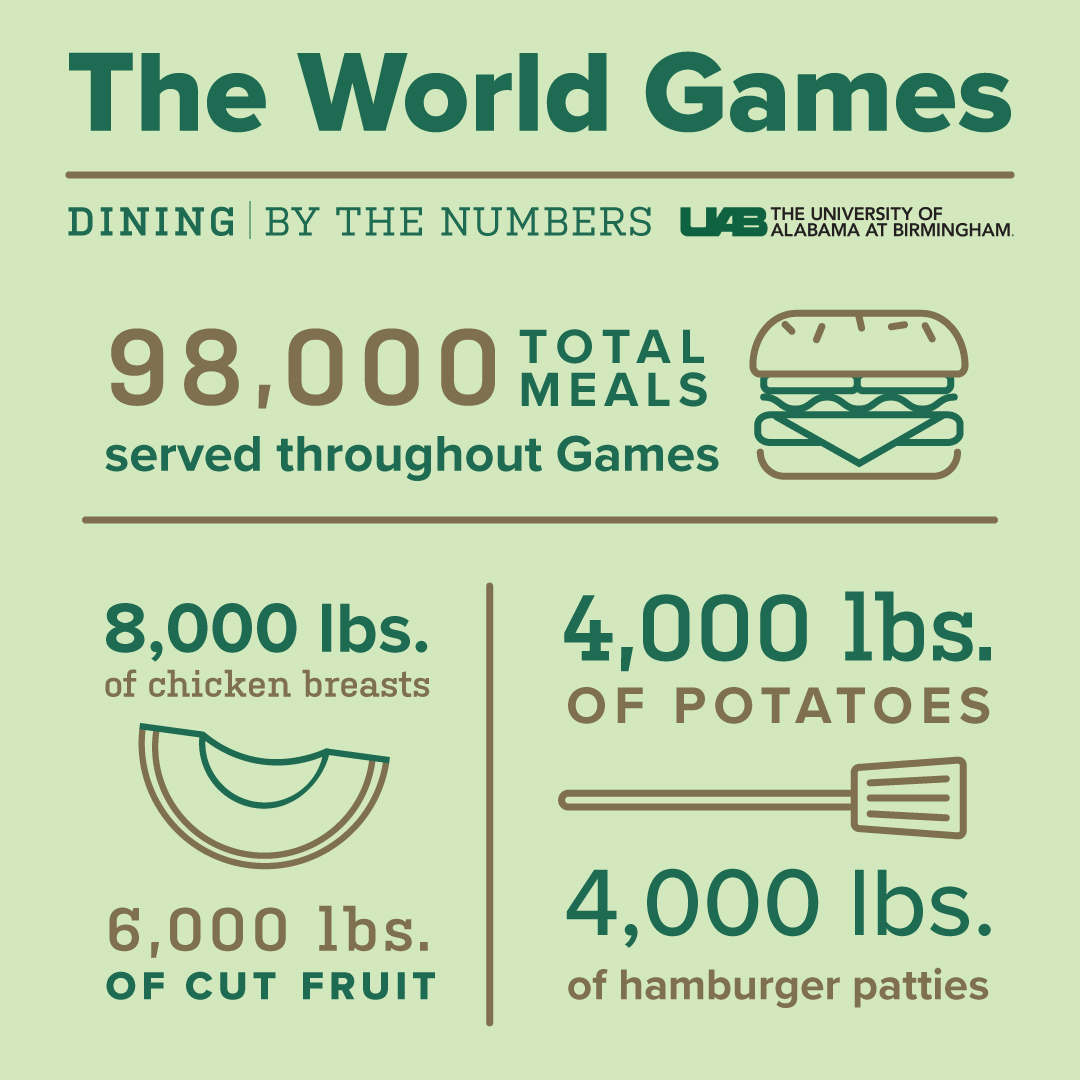 n addition, Campus Dining knows they’ll be able to consider the array of religious, allergen and other dietary restrictions for the visiting athletes. After all, they do it every single day at UAB.

“The menu we developed for the World Games is not too different from the menus we develop for normal campus operations,” said UAB Executive Chef David Fabrycki, who worked to design the menu. “During our normal course of business, we work with students from all over the world with varying dietary needs. Our systems and menus are built to allow us to accommodate these needs.”

One tweak they did make, however, is increasing the number of carbs and proteins available to accommodate the energy needs of Games athletes.

“Pastas, rice and grains will be found throughout the stations, as well as numerous protein options,” Fabrycki said.

Fabrycki and his team have also planned around when they expect certain athletes to be dining, because some may simply take in more calories than others: “Sumo wrestlers — I expect them to come in and eat us out of house and home. It’s the same thing with our student population. When the football team comes in here, we know we’re about to get hit pretty hard.”

The ratio of food prepared to food eaten is called a take-rate, Fabrycki explains, and he develops menus expecting that number to sit at about 75%.

“That means I expect about 75% of the people coming in to eat at that station,” Fabrycki said.

As the numbers fluctuate, he can look at the take-rate to adjust his production. In fact, it takes quite a bit of calculating to get this job done right. Bowser estimates Dining will feed between 3,200 and 3,400 people three meals per day. That’s 10,000 diners each day.

“Overall, we are currently forecasting to do over 98,000 meals during the World Games,” Bowser said. 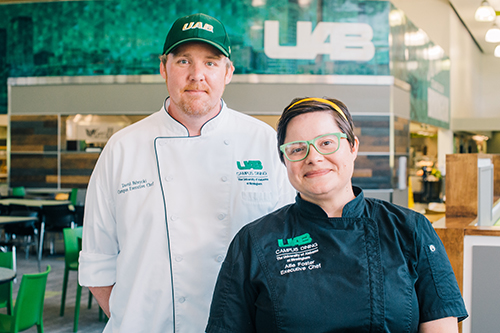 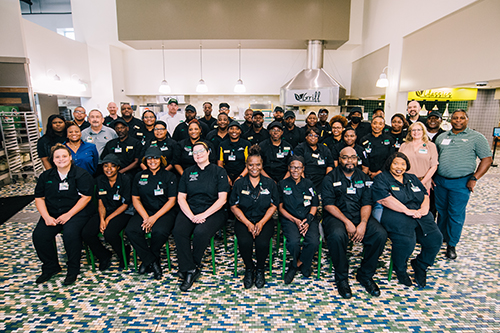 Clockwise from top left: UAB Executive Chef David Fabrycki and Allie Foster, executive chef for the Commons on the Green and Blazer Catering Co.; some of the UAB Campus Dining staff; World Games athletes enjoy one of their first meals in the Commons; and a Dining worker serves up food for two athletes. UNIVERSITY RELATIONS / Lexi Coon, Andrea Reiber and Steve Wood

“And the entire time we’re doing that, another team is over at McMahon Hall doing production prep and getting ready for the next day’s service,” Bowser said. “It’s just this constant revolving door of product and people and services moving around.

“[At a point,] it’s much less about cooking and more about being an air traffic controller,” said Bowser, adding that many of the popular campus spots will continue business as usual, including full operations in the Hill Student Center dining areas.

The recently renovated WOW Cafe American Grill and Wingery on 14th Avenue South likewise will remain open, and The Blazer Catering Co. will continue operating out of its facilities, he says.

That’s a lot of venues and a lot of food for a lot of people, but Campus Dining has done a lot of planning.

“We know the amount of folks that are going to be coming through the doors, we know the menu, we know the volume of what needs to be done and we know how to execute that at an incredibly high level,” Bowser said.

In other words, they know the recipe for success.