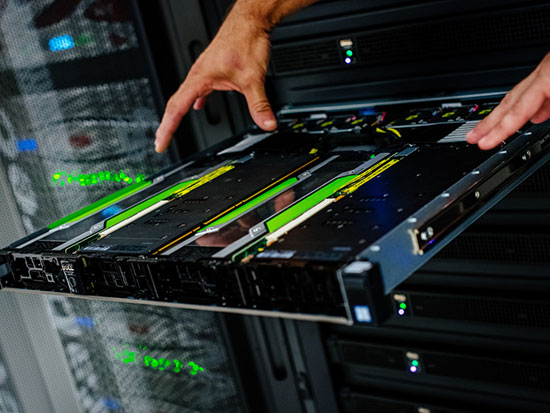 Upgrades to UAB's Cheaha supercomputer have accelerated research across campus. Ralph Zottola, the university's first AVP for Research Computing, explains what comes next.Ralph Zottola, Ph.D., is a scientist who got so fed up with his computer people that he became one.

“I’m the accidental IT guy,” said Zottola, assistant vice president for Research Computing. Zottola joined UAB in 2018 from the University of Massachusetts, where he was chief technology officer for research computing for the UMass system.

“I used to cut genes for a living,” Zottola said. “I was studying the structure and function of the glucose transporter. But IT couldn’t deliver what I needed to get my research done, so I started doing it myself.” This sideline grew until, as Zottola was looking at postdoc positions in structural or computational biology, “I got a job offer I couldn’t refuse to stay on to do computational biology research and provide scientific computing support,” he said. “I had my thesis defense Friday afternoon and on Monday morning I started working.”

More than two decades later, “I feel like IT has caught up to research,” Zottola said. “Research is agile and responsive. Now we operate like that in IT as well.”

The AVP for Research Computing position, a new one, was created to help develop a world-class high-performance-computing environment to enable UAB researchers to “accomplish work that will change the world,” said Curtis Carver Jr., Ph.D., vice president and chief information officer, in announcing Zottola’s hire this past June.

To make that happen, Zottola has been building his team, which has gone from three people to 15, including the undergraduate and graduate students hired as part of an internship program that launched in January. But his first move was a “walkabout” — a tour of labs and offices that saw him discuss opportunities and current limitations with nearly 100 individuals on campus. “One of the things they told me consistently is they enjoyed working with Research Computing — that they found our staff to be valuable and transparent,” Zottola said.

“They are like the best librarians,” said Marshall Abrams, Ph.D., an associate professor in the Department of Philosophy who has used Cheaha for computer simulations of his agent-based models of cultural change. “Good librarians just want to help people find the books they want and need, and the Cheaha team just wants to help people do their research.”

Nina Karguljac, M.D., an assistant professor in the Department of Psychiatry and Behavioral Neurobiology, agrees. The upgraded Cheaha has accelerated the research that she and Professor Adrienne Lahti, M.D., have been able to do on multi-modal brain imaging for schizophrenia, Karguljac said in the UAB IT Annual Report. What would take six and a half years on her office computer takes about two days with Cheaha, she explained. But “the speed of the supercomputer is not the most important thing for us,” Kraguljac said. “It’s the people who run it.”

That kind of positive feedback is heartening, Zottola said. But his walkabout also revealed common requests that could power UAB research even further. Three needs in particular are being fast-tracked, Zottola said.

“People said we need to make it easier to work with sensitive and restricted data,” Zottola said. “The obvious one is personal health information, but there is also sensitive data involved in Department of Defense research and elsewhere.” The first step in addressing this need is an investment in official HIPAA certification for the Cheaha supercomputer environment. The lengthy process could be complete this summer, Zottola said. “It supports the research that we’re actively doing and puts us in a position to do more collaborative work. It’s also useful for enabling predictive analytics on our own patient data that can help improve patient care.”

“Our researchers need to have an environment where they can develop software in-house — but set up so that once it goes into production it can be hosted locally or in the cloud,” Zottola said. “You hear a lot about the cloud these days, but it can get very expensive for research-computing applications.”

The goal is to create a simple table for faculty, Zottola said. “That way you can look at it and know, for this type of data, these are the systems to use. That gives our faculty a competitive edge in grants and gives us recruiting advantages, too.” He says he has seen this in action with the University of Massachusetts Green High-Performance Computing Center, which he helped to set up.

Computing power, like storage, follows an inflexible law: You can never have enough. Use of the Cheaha supercomputer cluster is booming as well, Zottola said. “You want your system to be at 70- to 90-percent utilization, and we look at those charts daily. We hit 90 percent last week.”

Zottola and his team are meeting with vendors to start planning their next investment in hardware. “We made an investment in GPUs (graphical processing units, the key hardware advance behind the machine learning boom). Now we’re seeing demand in the traditional CPU-type computing. Research changes in real time. Supporting research requires you to be just as agile and responsive.”

Meanwhile, Zottola is on a new walkabout. “I’ve been meeting with peer institutions in the state and seeing where we can partner,” he said. “We’re also working on partnerships with Innovation Depot, Southern Research, TechBirmingham and others to understand the resources needed and develop a menu of services they can tap into.”

UAB IT Research Computing has partnered with Ohio State University, University of Florida, Oak Ridge National Laboratory and University of Tennessee, Knoxville on a major grant submission to develop a leadership-class computing facility. “It’s just fantastic that we’re on the map that quickly,” Zottola said.

“One of the things that attracted me here is the visionary strategic thinking of President Watts and CIO Curt Carver to grow our research-computing capacity in an organized way,” Zottola said. “There’s so much great research going on, and the people are so collaborative. They understand, believe in and are pursuing the mission. I’m very excited to be here.”