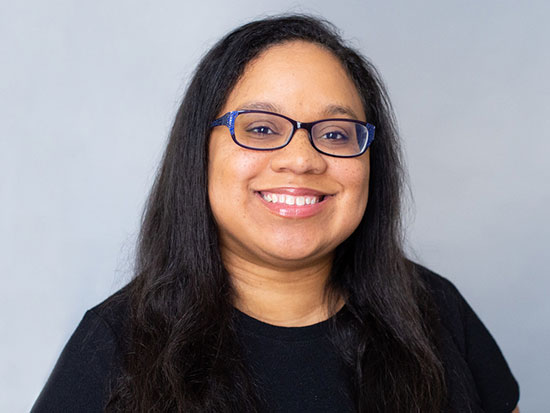 Specialized statistical methods from UAB biostatistician Charity Morgan contributed to a recent schizophrenia study by Harvard researchers with findings that "pave the way for precision psychiatry." There’s about a 100 percent chance that I have misused statistics somewhere in this sentence. You wouldn’t need to have a doctorate in statistics from Harvard to know that, but it’s surprising how often Charity Morgan, Ph.D., who does, encounters basic statistical errors in even the most prominent studies.

Morgan, an associate professor in the Department of Biostatistics in the School of Public Health, has for years been a regular contributor to the Journal of Nuclear Cardiology on topics such as “Landmark analysis: A primer” and “statistical issues associated with terminating a clinical trial due to slow enrollment.”

As those titles suggest, Morgan is a resident expert on statistical methods for clinical trials. That means she helps UAB researchers figure out how many patients they need to enroll in order to have a statistically valid result. This is a mathematical question, all the more so as the precision medicine revolution advances and genetic sequencing and statistical techniques that were once applied to thousands or millions of people at a time zoom in on a handful.

How many do I need?

“Say you have two treatments, an old one and a new one,” Morgan said by way of example. “You want to see if the new treatment is better than the old, and better means some biomarker you can measure before and after you give the treatment. If the new treatment is going to completely remove an abnormal marker from the body, while the old one leaves it there, you don’t need many people to see that. The bigger the difference between the new and the old treatment, the easier it is to spot.”

Today, Morgan is a leader in one of the fastest growing areas of biostatistics — figuring out how to extract valid data out of studies inherently limited to tiny sample sizes. “That can be a challenge,” Morgan said. “The methods you learned in your intro stats class aren’t going to work. You have to dig deep to find more esoteric options.”

“I always liked math growing up — the structure, that there was always a right answer,” Morgan said. “Once you get further along it gets more ambiguous. Biostatistics is very applied and practical, dealing with the real world.”

In the real world, of course, things can be messy, but they also tend to have underlying patterns that can be teased out with the right techniques, Morgan explained.

The work is inherently collaborative. This summer alone, she was an author on 14 newly published papers, among them a comparison of epidural drugs for women in labor, several studies looking at treatments and outcomes for patients with heart failure, the trial of an individualized decision aid for diverse women with lupus and an imaging study of patients with schizophrenia.

Paving the way for precision psychiatry

Morgan is particularly proud of one paper, published in the journal Biological Psychiatry in July. It reported success in an exciting proof-of-principle study of only two people. Based on a rare structural genomic variant shared by a mother and son, researchers augmented the pair’s standard psychotropic drug treatment with glycine. This despite the fact that the two had different diagnoses — bipolar disorder with psychotic features and schizoaffective disorder, respectively.

“We were able to show that giving glycine alleviated their psychotic symptoms and made a measurable difference in their lives,” Morgan said. “The work is really interesting and rewarding, and I feel like I’m making a difference.”

In a press release, publisher Elsevier asserted that the findings “pave the way for precision medicine in psychiatry.”

“Most studies of rare structural variants will have very small sample sizes, complicating the usual approach to statistical analysis,” Morgan noted in the Elsevier release. “Nevertheless, because the effects of a targeted treatment can be large, it is important to prioritize opportunities to study even small groups of patients who may benefit.”

Small is the new big

Unlike heart disease and cancer, the topics of many large-scale genetic studies, diseases such as schizophrenia, which affects 1% of the population, are inherently limited. “If you look at a patient’s immediate family, you probably won’t find anyone else” with the disease, Morgan said. “Just finding enough people to scan is a challenge. You may end up with a sample of only one or two people.”

But “as sequencing and computing power are getting cheaper, I do think these small studies will become more common,” Morgan said.

The advent of big data in medicine has made biostatistics a hot career field. “When I first started out in graduate school the statistics department only had a handful of majors each year, but now they have over 100 per year,” Morgan said. “Having jobs available is always a big thing. As data science and big data become a part of so many fields, biostatisticians are getting called on more often. You can work in any area that you’re interested in.”

For Morgan, that includes schizophrenia, a disease she first encountered at Harvard when she began working with Deborah Levy, Ph.D., and her research group. In 2012, Morgan earned the Young Investigator Award from the International Congress on Schizophrenia Research. (She presented posters on two separate aspects of the glycine study at the ICSR annual meeting this spring.) But Morgan’s work takes her far beyond psychiatry. She partners with collaborators across UAB and is a part of grants examining multiple sclerosis and blood loss, among others.

“Ideally, I like to be involved from the beginning — designing the trial, working day to day with the investigators, developing hypotheses,” Morgan said. “That’s how you can make the most impact as a biostatistician. When you get brought in at the end of the trial you are much more limited.”

As she meets with collaborators, “I’ll explain, ‘I haven’t done the biology since high school, but if you let me know what you expect to go on, what the hypothesis is and where it comes from, I can help,’” Morgan said. “If you treat it as numbers on a screen you won’t understand the nuances. I try to get the layperson’s view of what the problem is and how we’re trying to solve it.”