Discoveries on deck: Accelerating HIV suppression in the Deep South

In fiscal year 2019, UAB researchers received a record $602 million in grants and contracts, marking a second year of double-digit percentage growth in funding. That productivity has carried on unabated in 2020, and you can follow along. Every Tuesday, Research Administration releases a list of the grants and contracts awarded the previous week (BlazerID required).

In this new series, we’re spotlighting new or re-funded projects to offer a window into the groundbreaking, lifesaving work done by our colleagues around campus. (See the first three stories, profiling grants to test a new strategy against lupus, stop online opioid sales and build freezers for the International Space Station.)

This week, we’re taking a look at an innovative grant to speed up treatment initiation for patients in the Deep South newly diagnosed with HIV.

Project title: Geographic Variability in Time from HIV Diagnosis to Viral Suppression in the Deep South: A Roadmap to Accelerated Treatment Initiation

Funding: $2,357,260 over five years (December 2018-November 2023) from the National Institute of Allergy and Infectious Diseases 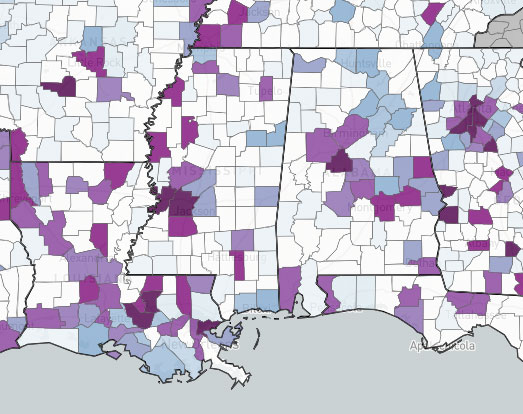 Screenshot of a portion of the interactive AIDSVu map showing rates of new HIV diagnosis on a county level in 2017. Darker colors represent higher diagnosis rates. The UAB-led Geographic Variability in Time from HIV Diagnosis to Viral Suppression study aims to advance understanding of factors that contribute to delays in achieving viral suppression in the Deep South. With the development of increasingly effective antiretroviral therapy, or ART, being diagnosed with human immunodeficiency virus (HIV) no longer suggests imminent death. But it remains a far more common experience for people in the Deep South region — Alabama, Florida, Georgia, Louisiana, Mississippi, North Carolina, South Carolina, Tennessee and Texas — than the rest of the country. The Deep South has a diagnosis rate that is 65% higher than any other region and poorer HIV survival statistics.

“Achieving early and sustained viral suppression following diagnosis of HIV infection is critical to improving outcomes for persons living with HIV and reducing transmission,” said Aadia Rana, M.D., an associate scientist in UAB’s Center for AIDS Research (CFAR). Understanding the range of factors — individual, geographic and sociocontextual — that contribute to delays in achieving viral suppression in the Deep South is the first step to accelerate initiation of ART in this region, Rana explained.

Filling in those gaps in understanding is the initial goal of this NIAID grant. The innovative partnership brings together experienced investigators from CFAR and the HIV divisions of the state health departments in Alabama, Louisiana and Mississippi. The researchers are using data from the states’ public health electronic HIV/AIDS reporting systems to map the geographic variability in time from HIV diagnosis to viral suppression — a viral load of fewer than 200 virus copies per milliliter of blood — among those ages 13 and older at diagnosis in the five years from 2014 to 2018.

The researchers are contextualizing this data with qualitative interviews in each state with persons living with HIV and HIV treatment and social services providers and other community stakeholders. The ultimate goal, Rana said, is to “engage stakeholders in developing a rapid ART initiation program focusing on localities in the Deep South with disproportionately longer time from HIV diagnosis to viral suppression.”

In addition to co-principal investigators Rana and D. Scott Batey, Ph.D., from the Department of Social Work, co-investigators include Michael Mugavero, M.D., in the Division of Infectious Diseases, Emily Levitan, Sc.D., from the Department of Epidemiology and Ariann Nassel, director of spatial data visualization at the UAB Lister Hill Center for Health Policy. And “we are always looking for collaborators who are interested in contributing to this project,” Rana added.