How many more COVID variants will we see? 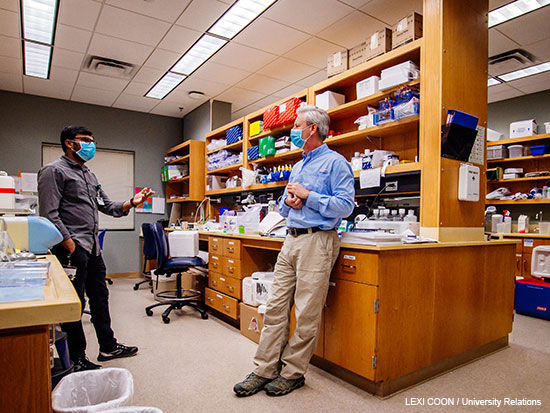 Kevin Harrod, Ph.D. (right), has been studying coronaviruses since the outbreak of the original SARS virus in the early 2000s.The Delta variant currently is surging through the United States and other countries worldwide, and the Centers for Disease Control and Prevention warns that the low vaccination coverage here and abroad are providing ideal breeding grounds for mutations that will result in more, and potentially more dangerous, variants. On Aug. 7, the World Health Organization announced it might name new variants after constellations once the 24 letters of the Greek alphabet have been used. And on Sept. 2, the WHO added a new variant, Mu, to its variant of interest list.

All of which begs two questions: How long can this process go on? And is there a limit to how much SARS-CoV-2, the virus that causes COVID-19, can mutate?

The answer to the second question is yes — there are limits, says Kevin Harrod, Ph.D., an expert on the molecular mechanisms behind respiratory infections and Benjamin Monroe Carraway Endowed Chair and Professor in the Department of Anesthesiology and Perioperative Medicine. Harrod has been studying coronaviruses since the outbreak of the original SARS virus in the early 2000s. So how many more SARS-CoV-2 variants does he think we might see? That is a much more complex answer, Harrod says.

For more information on how you can get vaccinated at UAB, click here.

"There is a limited amount of genetic variation that a virus genome can withstand and still remain easily transmitted," Harrod said. This limit is known as an evolutionary or genetic bottleneck. In the case of SARS-CoV-2, "while a virus can potentially mutate and create unique variants that evade immunity, there is only so much mutation that it can do before further mutation either weakens the virus or provides no benefit."

There are several constraints on mutation, Harrod explains. Variants can arise in a number of ways, including deletions of portions of the virus genome during replication. "Too many deletions render the viral proteins less functional," Harrod said. “Substitutions of one amino acid with another as means of adaptation can also occur — but again, only certain amino acids can replace others and still retain function, so again there are limits.”

"There is a limited amount of genetic variation that a virus genome can withstand and still remain easily transmitted. While a virus can potentially mutate and create unique variants that evade immunity, there is only so much mutation that it can do before further mutation either weakens the virus or provides no benefit."

Viruses can develop mutations that render them more resistant to vaccines, “but as it does this it could weaken its ability to replicate or transmit,” Harrod said. “Fortunately, we have not seen increased vaccine resistance with this virus with the current highly effective vaccines being offered.”

As long as there are enough unvaccinated people in a population to infect, SARS-CoV-2 will continue to adapt, Harrod says, with that adaptation driven by many factors. "As this is likely a bat virus, it is still adapting to humans," he said. "But immunity, either driven by high levels of infection in the population or driven by vaccines, are also drivers. We have a long way to go before we reach herd immunity, and thus we won't see this virus stop mutating until at least then." All viruses do this, so there is nothing unusually nefarious about SARS-CoV-2, Harrod points out. "It just sounds scary."


What is beyond the spike protein?

"It is important to note that all of the variants that you hear about" — Delta, Lambda, etc. — "are focused on mutations in the spike protein, and mostly on a small portion of the antibody binding region of the spike protein," Harrod said. "The virus is also adapting (i.e., mutating) in the 27 other proteins coded in the SARS-CoV-2 genome, but because we know so little about those areas, we have no idea what those mutations mean for increased transmission or pathogenicity." 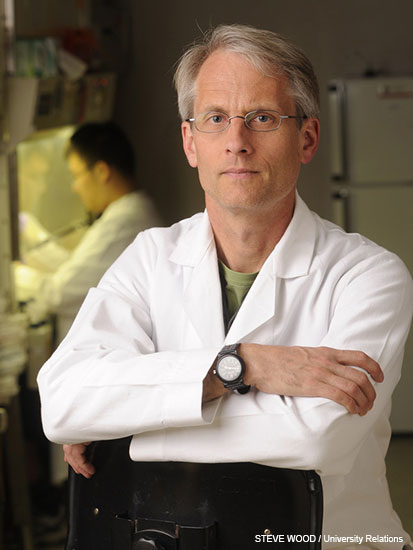 Paul Goepfert, M.D., director of the Alabama Vaccine Research Clinic, says that the best way to stop new COVID-19 variants from appearing is through high levels of vaccination.

Paul Goepfert, M.D., professor in the UAB Division of Infectious Diseases and director of the Alabama Vaccine Research Clinic, says the leading hypothesis for the infectious power of the Delta variant is that it has changed the composition of the virus’s spike protein in a way that allows it to enter cells more efficiently. This mutation allows the spike protein to better attach to the cells that line the respiratory tract, including the throat, nasal passages and lungs, says Goepfert, who holds the Edward W. Hook III Endowed Professorship in Infectious Diseases at UAB.

Goepfert emphasizes that current evidence suggests the mRNA vaccines are up to 90 percent effective against severe infection with COVID-19 variants and reminds people that the other coronavirus strains developed when there was little to no vaccine around.

Some 37 percent of eligible Alabamians are fully vaccinated as of Aug. 25, 2021, “but the rest are not,” Goepfert said. “So, we have a virus that sees an immune system that it wants to get around. If COVID has taught us anything, I suspect this virus is going to learn to mutate into a new variant to get around the vaccine-induced immune response. The best way to never see this new variant is to stop it from developing in the first place. The way to do that is by getting vaccinated.”

For more information on how you can get vaccinated at UAB, click here.