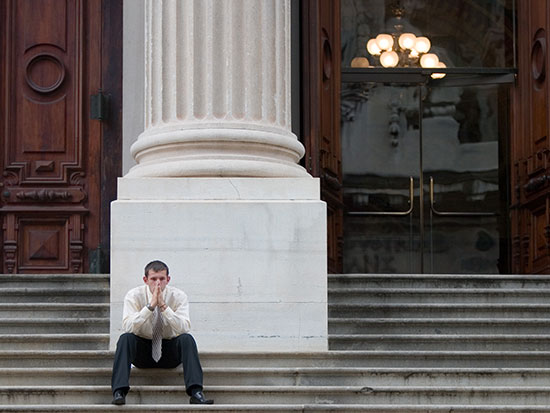 Stock market crashes, soaring foreclosure rates, and widespread layoffs and bankruptcy filings were all a feature of the worldwide Great Recession of 2007-2009. The past two decades also have seen a massive increase in consumer lending. Meanwhile, there is a growing body of research linking debt to poor health outcomes, and previous studies suggest that certain types of financial losses — including bankruptcy and unsecured debt — are particularly stressful, especially for those in middle age.

So, can debt and bankruptcy help explain the association between wealth loss and midlife health problems? And which financial stressor seems to have the biggest impact on health? A group of researchers at UAB tackled these questions in a new study drawing on detailed surveys collected between 1996 and 2016 from more than 7,000 baby boomers participating in a cohort of the National Longitudinal Study of Youth.

The researchers found that financial stressors — primarily debt, but also wealth loss and bankruptcy — were in fact associated with risk for being diagnosed with a psychiatric disorder (including depression and anxiety) and high blood pressure.

Despite the outsize media attention paid to stock losses and declines in home value, indebtedness alone — defined as having inadequate financial resources to pay off all outstanding debts — was the strongest predictor of both psychiatric disorders and high blood pressure diagnoses, the researchers found. Unsecured debt (having $500 or more in educational loans, credit card loans, medical bills and/or other debts not linked to a material asset) also was significantly associated with health problems.

"These findings suggest that debt is more than just a secondary stressor that follows loss of wealth or employment. Instead, indebtedness should be conceptualized as a primary stressor, or even a distinct component of socioeconomic status, among middle-aged adults."

Specifically, they report that:


Debt leads the way down

“These findings suggest that debt is more than just a secondary stressor that follows loss of wealth or employment,” the researchers write in Varieties of Financial Stressors and Midlife Health Problems, 1996-2016, published in the Journals of Gerontology: Social Sciences in June 2021. “Instead, indebtedness should be conceptualized as a primary stressor, or even a distinct component of socioeconomic status, among middle-aged adults.”

“Debt has become a prevalent drag on families’ financial well-being and social mobility in the United States since the expansion of predatory lending practices in the 1990s and early 2000s.”

— Joseph Wolfe, Ph.D., associate professor in the Department of Sociology

“Debt is not inherently bad for health,” Wolfe noted. “If seen as an investment in the future, debt can have a positive association with mastery and self-esteem.” But previous research has shown that, “for midlife and older adults, however, high levels of debt are related to everything from depression, anxiety, suicide, overall health status, high blood pressure and heart attacks,” he said. The health risks of debt can also be indirect, he added: “Debt is associated with unhealthy lifestyles characterized by poor sleep, obesity, drug dependence and problem drinking.”

“The lack of findings related to stock losses was especially interesting,” Wolfe said. “A recurring narrative in U.S. media is that the market defines the mood of the nation, but stock losses mattered the least for health — not at all! — in our analysis,” Wolfe said. “A loss in personal stocks may still increase stress and reduce well-being, just not enough to cause a lasting health problem. In other words, stock losses appear to be ‘tolerable’ stressors after accounting for other sources of wealth and income.”

Wolfe and colleagues based their study on data from the National Longitudinal Survey of Youth 1979, which enrolled participants in 1979 when they were between 14 and 22 years old. The UAB researchers used information from a set of 7,143 respondents, using surveys collected between 1996 — when participants were in their 30s — and 2016, when they were in their 50s. “These are individuals who entered middle adulthood while the United States was undergoing consecutive crises in the early 21st century,” Wolfe said. (The National Longitudinal Survey of Youth collects some surveys every year; detailed questions on finances were asked every four years during the 1996-2016 period.)

There is an initial stress response from losing large amounts of wealth in the form of falling house prices or retirement savings depleted by stock crashes, Wolfe says. But “the relationship between wealth shocks and health and mortality risk among older adults may depend, at least to some degree, on additional experiences of debt or bankruptcy,” he said.

The connection between financial stress and health problems is especially urgent as governments face the economic shocks brought on by the global COVID-19 pandemic.

Rising levels of debt and bankruptcy associated with the COVID pandemic will certainly have an effect on population health, Wolfe says. “We already have a serious problem with the affordability of medical care, and I’m not talking about expensive cancer treatments — I’m talking about people having trouble paying for their insulin,” Wolfe said. “We also know that people will skip doses of medications and doctor’s appointments as ways of saving money when they are having financial trouble.” Other researchers have begun to look into income shocks and health during the pandemic, Wolfe notes.

“Given the recent volatility in the U.S. economy, our results highlight the potential loss of health that may occur if nothing is done to prevent economically vulnerable populations from sliding into financial crisis,” the authors note in their paper. “Our results also emphasize the need for additional research to develop individual-level interventions to improve health among those already experiencing financial difficulties.”


This manuscript is a continuation of Wolfe's research, “Who’s Hurt Most by Economic Shocks? Obesity and Health After Major Financial Loss,” which was funded by a UAB Obesity Health Disparities Research Center pilot grant. The OHDRC is supported by a grant from the National Institute on Minority Health and Health Disparities (U54MD000502).

Do you need financial guidance? The Financial Wellness Program from the Employee Assistance and Counseling Center in partnership with the Regions Institute for Financial Education offers free, confidential one-on-one financial counseling services to help employees take control of their money. Virtual appointments are available. Call 205-934-2281 or visit the Financial Wellness Program website at uab.edu/humanresources/home/finwell to find: