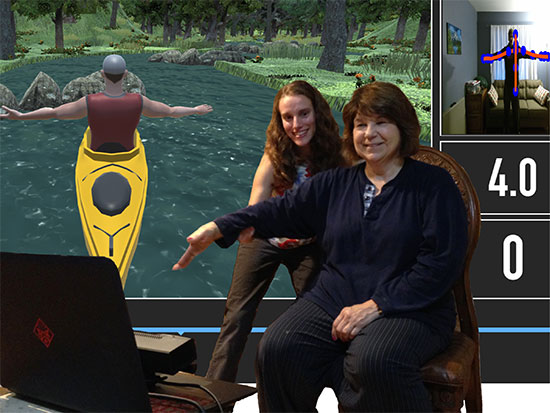 The Recovery Rapids game shown above, one of several "motor games" used in the VIGoROUS stroke rehabilitation study, challenges patients to paddle and maneuver a kayak with their affected limb. The study found that practicing games like Recovery Rapids at home, and participating in short tele-therapy visits focused on behavioral therapy, led to outcomes similar to a highly regarded in-person stroke rehab therapy known as CI Therapy, developed at UAB. (Researcher Lynne Gauthier, Ph.D., who developed the tele-gaming hardware and software system, is shown above, left. Gauthier trained at UAB and is now at the University of Massachusetts-Lowell.) Image courtesy Lynne GauthierIn the largest study of its kind to date, a game-based, self-managed approach to stroke rehabilitation produced outcomes similar to a highly regarded form of in-person therapy — while requiring only one-fifth the number of therapist hours. Reducing therapist hours would reduce the cost of treatment by a similar amount, researchers say.

How the therapist time was allocated was a crucial factor, the study found: Short tele-therapy visits focused on patient motivation and accountability significantly improved results for the at-home participants. Findings from the new, multi-site study from investigators at the University of Alabama at Birmingham and eight other institutions were published in the January 2022 issue of eClinicalMedicine, an open-access journal from The Lancet.

This “flipped” approach — allowing patients to practice rehab exercises on their own, while therapists concentrate on behavioral and motivational issues — addresses important access barriers to stroke rehabilitation, the researchers say, including cost and transportation issues. And the findings are particularly applicable during the COVID pandemic, as interest in telemedicine and tele-therapy has soared.

Each year, nearly 800,000 Americans have a stroke. Stroke risk is particularly high in the southeastern United States and among Black Americans. Many stroke survivors struggle with weakness or an inability to move their limbs on one side of the body, known as hemiparesis. Up to 80% of people who have had a stroke experience upper-limb weakness or paralysis. And two-thirds of stroke survivors report that they cannot use their affected limbs to do normal daily activities.

“Now you have a low-cost, tele-rehab version of CI Therapy that provides a possibility of greatly increasing access to this efficacious treatment.”

A highly effective form of therapy is available. Known as Constraint-Induced Therapy, or CI Therapy, it was developed by Edward Taub, Ph.D., University Professor in the Department of Psychology and co-director of the CI Therapy Research Group, in collaboration with colleagues at UAB. CI Therapy, which combines motor exercises and behavioral therapy that focuses on patient motivation, is used around the world to help patients regain limb function and language abilities after stroke. But the 35 hours of outpatient therapy, provided by trained therapists, represent a barrier to wider use of CI Therapy, explains Gitendra Uswatte, Ph.D., professor in the Department of Psychology, co-director of the CI Therapy Research Group and director of the UAB site in the multi-site trial published in eClinicalMedicine.

“The amount of therapist time needed to deliver CI Therapy makes it expensive relative to typical physical rehabilitation,” Uswatte said. “We have been working for some time on ways to reduce the cost. And in addition to cost, just getting to a medical center where they can receive the therapy is a barrier for some patients, either because they live in a rural area or because of their mobility issues.” 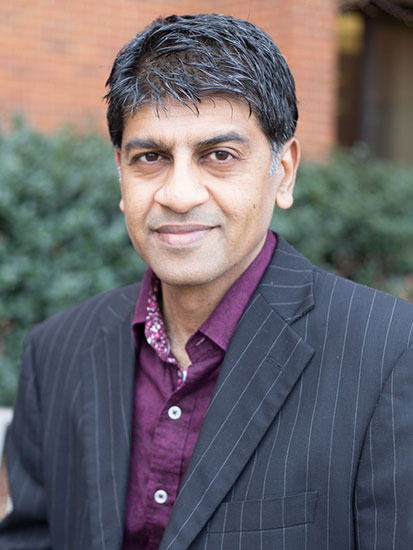 Gitendra Uswatte, Ph.D.In the new study, researchers evaluated a video game-based therapy that replicates the limb exercises used in CI Therapy in a version that patients can use at home. Developed by Lynne Gauthier, Ph.D., who trained at UAB and is now on faculty at the University of Massachusetts-Lowell, the technology includes a motion-capture device and games that ask participants to paddle a kayak down a river with their affected arm, for example, or use that arm to reach up and brush away bats while exploring a cave. “The software monitors the patients’ movements and then modifies the game play based on performance,” Uswatte said. “Just like any game, you win points for playing the game better, and the patient is motivated to earn points and beat their personal best.”

The researchers randomized participants in the trial, known as VIGoROUS, to one of four groups:

Those last two groups were designed to test another variable of interest for the researchers: a flipped model of care, in which valuable therapist time is spent on behavioral interventions rather than monitoring patients while they practice motor exercises. During their brief video-consultations, therapists reinforced the participants’ commitment to habit change, reviewed a diary that participants kept on their use of their affected arm in day-to-day life, and engaged in guided problem-solving to overcome barriers to using the participants’ affected arms.

There are three main take-home messages from this study, Uswatte said: “One is that it confirmed that face-to-face CI Therapy is a highly efficacious form of therapy for disuse of an arm after stroke. The second is it showed that the tele-gaming group had improvements in their more-affected arms in everyday life that were equivalent to in-person CI Therapy. The third is that they were equivalent even though the therapist effort was only seven hours with tele-gaming, compared to 35 hours of effort for the in-person CI Therapy. That indicates a substantial reduction in cost. Now you have a low-cost, tele-rehab version of CI Therapy that provides a possibility of greatly increasing access to this efficacious treatment.”

“The robust and sustained improvement [in the trial] demonstrate[s] that the majority of individuals who are nearly five years post-stroke on average can achieve clinically meaningful improvements in motor capacity, even with as little as five hours of therapist intervention,” the study authors write.

“What this trial showed is that, when therapist time is limited, you want to direct it to the behavior-change aspects of CI Therapy — the problem-solving discussions and assignment of homework .… These results, added to other research results, show that we should pay much more attention to behavioral aspects of physical rehabilitation.”

In addition to being the largest trial of self-management for neurological recovery to date, VIGoROUS (which stands for Video Game Rehabilitation for Outpatient Stroke) also is the first randomized controlled trial to evaluate the effectiveness of a flipped model of care, the authors note. VIGoROUS enrolled more than 150 participants at UAB, Ohio State University (Gauthier’s previous institution before UMass-Lowell) and the University of Missouri, along with two outpatient rehabilitation clinics. All participants were more than six months post-stroke with mild to moderate upper-extremity hemiparesis.

“What this trial showed is that, when therapist time is limited, you want to direct it to the behavior-change aspects of CI Therapy — the problem-solving discussions and assignment of homework,” Uswatte said. “This is quite a change from the traditional approach to physical and occupational therapy, which is on the motor training itself. These results, added to other research results, show that we should pay much more attention to behavioral aspects of physical rehabilitation.”

Although the trial was done in adults with stroke, “there is data showing the CI Therapy is efficacious with children who have cerebral palsy with motor impairment,” Uswatte noted. “I think a video game approach may be very helpful in these patients. Patients with traumatic brain injuries and multiple sclerosis could also benefit from a telehealth approach.”

The research was funded by the Patient-Centered Outcomes Research Institute, or PCORI, “which has a particular interest in sponsoring pragmatic trials that show treatment is effective in existing clinical settings,” such as the two rehabilitation clinics that participated in the study, Uswatte said.