The Birmingham City Council voted unanimously to ban texting while driving on city streets effective Aug. 1 — an edict that includes the UAB campus. The fine for violating it $100. 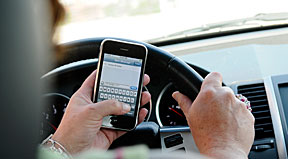 UAB employees and students should not text while driving, says UAB Chief of Police Anthony Purcell. He says the UAB Police Department can and will enforce the measure.

“It’s a city ordinance, and any ordinance passed by the city council is enforceable by all law enforcement,” Purcell says. “If we see someone driving erratically and about to cause an accident or get somebody hurt, certainly we’ll make the appropriate stops like we always do. And if we find out they were texting while driving, we’ll take the appropriate action.”

Purcell says the department may issue warnings during August, if the situation warrants it. “For the first 30 days it goes into effect we may just give a warning — if we can,” he says. “It’s appropriate to give a warning once a new ordinance or law is enacted if possible. It’s part of educating our community — especially those who may not know about it.”

Distracted driving caused by cell phones, texting or use of other technologies is epidemic, according to officials at the UAB University Transportation Center (UAB UTC). UAB hosted the state’s first distracted driving summit this past December to bring together leaders in transportation, policy, law enforcement and science to discuss how to reduce motor-vehicle crashes resulting from distracted driving through legislation, enforcement, public awareness and education.

The summit followed a national meeting called by U.S. Secretary of Transportation Ray LaHood in September 2009 and attended by Russ Fine, Ph.D., director of the UAB UTC, and Despina Stavrinos, Ph.D., a post-doctoral fellow and co-organizer of the Alabama summit. LaHood was the keynote speaker at the Alabama summit.

An estimated 800,000 vehicles were driven by someone using a cell phone in 2008, according to statistics gathered by the U.S. Department of Transportation. Six thousand people died in distracted-driving-related vehicle crashes, and 500,000 were injured.

The America Automobile Association Foundation for Traffic Safety reports that seven out of 10 drivers admit to texting while driving. Statistics also show that almost 50 percent of all drivers ages 18 to 24 are texting while driving, and drivers who use cell phones are four times as likely to get into crashes serious enough to injure themselves, according to the National Highway Transportation and Safety Administration. One national study reported distraction from cell phone use while driving extends a driver’s reaction as much as having a blood alcohol concentration at the legal limit of .08 percent.

Driving while distracted is a factor in 25 percent of police-reported crashes, according to insurance companies.