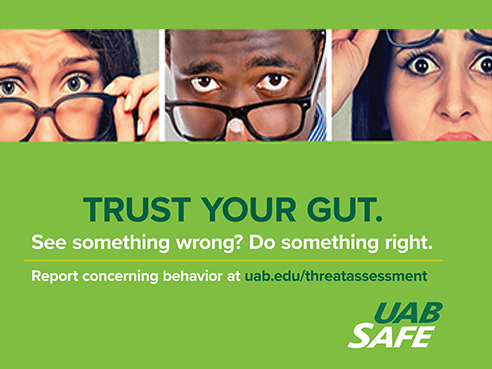 But UAB’s biggest secret weapon? A student or employee’s intuition.

A 13-year study of active shooter behavior conducted by the FBI and published this past year revealed that between 2000 and 2013, 54 percent of people who witnessed concerning behavior did nothing in response. Only 41 percent reported the behavior to law enforcement.

To bridge that gap, UAB formed the Behavioral Threat Assessment and Management team (BTAM) in 2016, comprising members from the university and UAB Health System. Any employee who notices concerning behavior or emotional changes in a colleague, student — or even themselves — can file an anonymous report with BTAM, which uses a structured process to evaluate and manage behavioral threats to the safety and well-being of the campus community.

Keep an eye out for these concerning behaviors:

Imminent threats should be reported through 911 or by calling the UAB Police Department at 205-934-3535. Those include knowledge of a colleague’s or student’s possession of a weapon on UAB property, physical or attempted assault or explicit fears of harm.

For non-imminent threats, reports can be made to BTAM anonymously by completing an online form or contacting a BTAM member. BTAM is an enterprisewide resource; students and visitors to both the academic and medical campuses also can file reports of suspicious behavior.

Reports to BTAM have ranged from comments made in passing to online threats and stalking. James Erwin, associate director in University Risk Management and a member of BTAM, says it is important to err on the side of caution and pass along any concern – even those that are seemingly small.

“At such a large workplace like UAB, it can be easy to assume that another colleague or co-worker will report something suspicious or concerning, especially if it’s about someone you don’t know,” Erwin said. “However, reporting something as soon as you notice it can prevent harm or injury to someone that you do know.”

The BTAM team includes a diverse group of people, including representatives from UAB Police and the Department of Psychiatry. BTAM’s team members evaluate reported concerns first through their Triage Team, which reviews, analyzes and assesses the identified alarming or threatening behavior, often consulting with subject-matter experts, taking statements and reviewing UAB policies. If appropriate, the Triage Team will forward the assessment to the full BTAM team, which then develops a case-management strategy. Managers or supervisors then implement approved recommendations from BTAM or other UAB officials involved in the assessment.