Emergency Department to screen all adult patients for HIV

Twenty-one percent of U.S. residents infected with human immunodeficiency virus (HIV) are unaware they carry it, according to the Centers for Disease Control and Prevention. In simple terms, more than 220,000 carriers are not being treated and may be spreading the virus that causes AIDS to others. 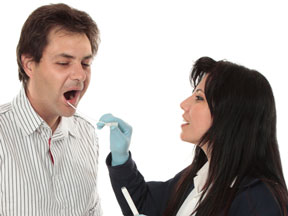 UAB Hospital and 25 metropolitan hospitals will begin screening every patient treated in the emergency department for HIV to reduce those numbers. The CDC will provide $1.6 million to UAB during the next three years through the Alabama Department of Public Health to fund the testing program and expand treatment opportunities.

“Routine testing for HIV infection is becoming the standard of care in many hospitals in the nation,” said James Galbraith, M.D., a UAB emergency medicine physician and coordinator of the testing program. “This is an effort to identify those who are unaware they are HIV-positive and get them appropriate care and treatment.”

“Every infection that we prevent and every newly infected patient who gets therapy means that we slow this cascade of infection and help reduce the incidence of HIV/AIDS in the country,” said Michael Saag, M.D., director of the UAB Center for AIDS Research.

Starting this summer, Galbraith says, the emergency department will test all patients ages 18-65. The Rapid HIV test is simple, done as part of a normal blood draw or as an oral swab. The results will be ready within 30 minutes, often before the patient has completed their visit. A negative result will be communicated through the normal discharge instructions provided by the unit nurses. A positive result will be communicated by a physician, in a private setting.

“We want to handle positive results with sensitivity and care,” says Galbraith. “We will provide post-test counseling services in the ED, and our colleagues at the 1917 Clinic, UAB’s home for HIV/AIDS care and treatment, will link positive cases to long-term treatment and counseling services available at UAB or community-based organizations. Judging by the number of patients we see each day in the ED, we anticipate having roughly one positive test per day.”

Treatment advances such as the development of antiretroviral therapy — a drug cocktail of three or more medications — have made a profound difference in what it means to be HIV-positive.

“New treatments for HIV developed during the past 15 years have transformed HIV into a chronic, manageable disease, in which patients can live a full life,” Saag said. “These therapies work best early in the course of infection, before a patient actually becomes sick and when testing is the only way to know if the infection is present. Compared to where we were 30 years ago, when AIDS was first described, the progress is breathtaking. AIDS is no longer the death sentence it used to be, provided the person infected with the virus finds out in time for the treatments to work.”

Patients can opt out of the test, but Galbraith says HIV-testing is becoming more common, and a 2009 pilot study conducted in the UAB emergency department during a three-day period found that most people were receptive to the test.

“We’re implementing strategies that will make this effort fully transparent in order to reinforce our universal testing policy and prevent false assumptions of targeting specific groups,” said Galbraith. “Our goal is simply to help identify those unaware of their HIV status and get them to the appropriate treatment as soon as possible. This is a very logical next step in the fight against HIV/AIDS.

A study in the Annals of Internal Medicine in 2010, conducted by researchers at Yale and Stanford universities, estimated that one-time screening of low-risk individuals and yearly screening of high-risk ones would prevent nearly 7 percent of new infections.

UAB will hire five additional laboratory technicians in the Emergency Department to process the tests, ensuring that the work flow in the ED will not be adversely affected by the new screening.  HIV-testing services will be provided at no cost to ED patients.