As if curating the UAB Visual Arts Gallery weren’t enough to occupy him, Brett Levine is undertaking his most challenging and time-consuming project to date — a biography of one of Alabama’s foremost photographers. 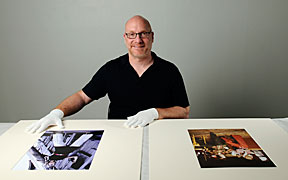 Levine says his work with the late James “Spider” Martin estate is one reason he received a 2010 Literature Fellowship Grant from the Alabama State Council on the Arts. Levine also was selected because of the merit of his work, career potential and service to the state.

“I’m incredibly honored to be given a literature fellowship,” says Levine, the only arts administrator to receive one. “To think an art historian, critic and writer could have been regarded enough by literary peers to be given an honor of this type is very humbling.”

Levine always has viewed Martin as a remarkable photojournalist, artist and larger-than-life character. The gallery hosted “Spider Martin’s Unseen Sixties” exhibit three years ago, which showcased never-before-seen fashion photos from the late photographer during an exhibit co-curated by Levine and his wife, Mindi Shapiro. It was then Levine began a friendship with Tracy Martin, the photographer’s daughter.

Levine approached Tracy Martin a year ago about the possibility of writing a biography on her father. Martin is best known for his Birmingham News photos from Bloody Sunday in Selma during the Civil Rights Movement. But his family — and Levine — believe Martin’s contemporary work also is compelling. His photos appeared in the pages of Avondale Mills, Playboy and Birmingham Magazine. Coupled with a personal life that was intriguing on many levels, Martin’s story is a piece of Alabama art history they believe needs to be shared.

“Spider’s family for many years has been concerned about the way his legacy would be portrayed,” Levine says. “The fact that I was here at UAB and able to do the exhibition — which was incredibly well received — put us in a position to build a relationship to do something else. I felt like I was the right person to write his biography; and when I approached them, they agreed.

“The book project is just commencing,” Levine adds. “It’s a major undertaking. It will be years in the making; there’s no doubt about that. But through the type of relationships I’ve established with the people involved, the capacity for the work gets better and better.”

Levine is an accomplished art history writer. He has written for national and international arts publications including Art Papers, Art New Zealand, Urbis and Object. He has more recently started contributing regularly to general publications designed for non-arts audiences. Levine has written for a newspaper in Kentucky and Birmingham Home and Garden and now is a regular contributing writer to B-Metro magazine. His motivation is to bring complex work and ideas to audiences that may be unfamiliar with any of the issues of contemporary art.

“I’ve written some major catalog essays for people, but you’re talking about 10,000 to 15,000 words, 40 to 70 pages — major monographs on people,” Levine says. “You’re not talking about trying to fairly, faithfully and interestingly try to represent someone’s entire life.”

Levine says the key to the project is the access the Martin family is giving him.

“From the outset, it’s all about people who agree to tell me what they know,” Levine says. “Tracy and her family are being very supportive and trying to tell people that they would rather them be honest than protect them. I feel as people understand what it is I’m doing, their desire to participate will be greater and the project itself will be as open-ended as it can be. My challenge will be keeping parameters on it and writing the story that needs to be told, within the type of story people actually want to read.”

That Levine has been able to tie this project to an exhibit the Visual Arts Gallery hosted is equally gratifying, he says. He also is grateful for the support he has received from faculty in pursuing the biography.

“We all are interested in anything to highlight what we do here at the university,” Levine says. “We all work on our day-to-day projects, but we’re also extending ourselves and our scope, reach and knowledge. It’s good to be here with these opportunities and have the freedom to be able to pursue a project like this.”

Levine has researched archives and completed some background work in recent months. Interviews on the project begin this month. Levine is confident Martin’s life story has enough intrigue to make the book a page-turner.

“I think people in Alabama, and nationwide, are interested in Spider,” Levine says. “I think they’re interested in some of the more fascinating aspects of his personal life. And the last part of this is the mystery surrounding how he passed away. You start with some kid in Alabama on a bridge in Selma making a name for himself, and you end up alone on somebody’s rented farm in Blount Springs dead of a gunshot wound. It’s an interesting story. So here we go.”