Learning the rules: Managing autism in the workplace 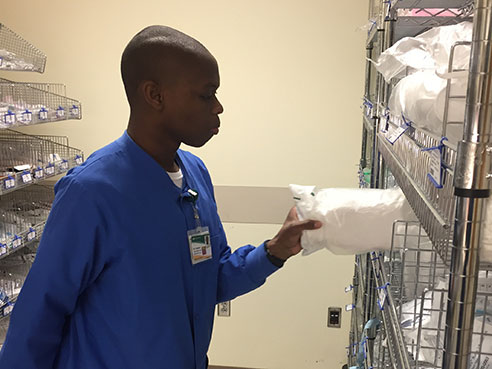 Eian Youngblood, a high school senior, is a Project SEARCH intern at UAB Hospital. The yearlong program gives high school students invaluable job experience with several different units in UAB Medicine. A lack of job experience is a roadblock for many people with autism spectrum disorders as they look to enter the workforce.For many Americans, autism awareness began with “Rain Man,” the 1988 film starring Dustin Hoffman. Characters with autism spectrum disorders (ASD) are far more prevalent in the media today, from the lead role in “The Good Doctor” on ABC to Julia, a Muppet on the spectrum on Sesame Street. That only makes sense, as the reported prevalence of ASD has soared from 1 in 10,000 in 1970 to 1 in 59 in 2018. Yet even though most of us probably know someone with ASD, there’s one place people with autism spectrum disorders are still rarely seen: at work.

Around 80 percent of people with ASD are unemployed, says Samantha Wadsworth, a rehabilitation specialist with the Alabama Department of Rehabilitation Services (ADRS). That means millions of people are missing out on income and more. “Employment means pride, dignity and independence,” said Wadsworth, who helps individuals with autism disorders identify jobs and succeed in the workplace as part of ADRS’ free job readiness programs. Employers also are missing out, Wadsworth adds. ASD covers an entire spectrum of abilities, she notes, so generalizations can be misleading. But common strengths and talents include exceptional concentration, attention to detail, reliability and loyalty.

Cam’Ron Hamilton came to UAB through Project SEARCH. The national program connects students with disabilities to internships with employers. UAB’s Project SEARCH center, one of 11 in Alabama, is a partnership among ADRS, UAB, UAB Medicine, Birmingham City Schools and United Ability. The department where he works uses a complex coding system that makes it very difficult to train new staff. It takes most people days or even weeks to master the process, and even then they make mistakes. Cam’Ron learned the process in about five to 10 minutes and he’s had a zero-error rate since he’s been doing that task.

Why is it so hard for people on the autism spectrum to find jobs? Part of the problem is employers’ misunderstanding about what individuals with ASD can do, Wadsworth says. Nearly all individuals with ASD have some difficulty with social interaction, however. That, combined with a lack of employment history, can present a significant challenge to people with ASD at work, she explains. But they aren’t insurmountable.

Hamilton is one of at least 15 Project SEARCH interns hired in positions across UAB Medicine since the program began. Another intern, Ethan Major, was selected at the 2018 Employee of the Year in the large business category by the Alabama Governor’s Committee on Employment of People with Disabilities, and UAB was invited to present at the national Project SEARCH conference this past summer, said Sherri Moultrie, coordinator for UAB’s AWARE (Always Working to Advocate, Retain and Employ) program in Human Resources: “This has been a great success.” So much so that in 2018, Project SEARCH interns began working in UAB clinics, including endoscopy and the maternal/fetal medicine unit at the Womens and Infants Center. “More UAB employees are working alongside individuals with ASD, especially within UAB Medicine,” Moultrie said. “And we’re always looking for opportunities to expand, including to the university side of campus.”

“Very rarely is it the job tasks that prove to be a problem for people with ASD,” Wadsworth said. “It’s the social rules.” This throws up a barrier right from the outset. “Interviews do not often go well,” she said. Candidates might ask irrelevant or personal questions, or fail to “sell” themselves, coming across as odd or uninterested to potential employers. But these are skills that can be learned and improved, Wadsworth said.  (And colleagues can benefit by using these communication tips.) She now works with her clients on everything from mock interviews to the basics of lunchroom etiquette, using a range of techniques, including role-playing, diagrams and scenes from movies that help distinguish “good” from “bad” behavior.   (See more strategies here.)

Through her position at ADRS, Wadsworth has created social skills programs specifically designed for those with ASD. She works with people that are seeking employment, as well as those who are already employed but are having communication or social barriers on the job. One of the main services offered is the Connections social skills training program, a free, group-based program for adolescents and young adults working with ADRS that is targeted at improving skills necessary for adult life with a concentration on work-based social skills. (To learn more about Connections, contact Wadsworth at samantha.wadsworth@rehab.alabama.gov or (205) 870-5999. To learn more about accessing ADRS services, visit www.rehab.alabama.gov.

“There are so many unspoken rules in the workplace,” said Sarah O’Kelley, Ph.D., associate professor in the Department of Psychology and director of the Autism Spectrum Disorders Clinic at UAB Civitan-Sparks Clinics. “How do you initiate a conversation? How can you tell if you’re talking about something that’s interesting to someone else? How do you know when you’re talking at the wrong time? You may have just picked up how to do those things. But someone with ASD doesn’t necessarily learn skills in the same way. And that holds a lot of people on the spectrum back from being successfully and happily employed.”

O’Kelley is a certified provider for PEERS (Program for the Education and Enrichment of Relational Skills), a social skills intervention for teens and young adults and their parents or caregivers that was developed at the University of California, Los Angeles. The 14-week PEERS program helps motivated teens with ASD learn how to make and keep friends. It covers everything from how to choose appropriate friends to handling rumors and gossip to changing a bad reputation. (The 16-week young adult program also covers dating.) While the teens are learning these skills through the use of scripts, role-plays and modeling, their parents or caregivers are covering the same material, so they can assist in practicing during the week. “PEERS makes those unspoken rules more clear and more explicit,” and the same skills carry over to the workplace, O’Kelley said. “The reason programs like this work is we help teens think about these things in a step-wise, rule-based fashion. We give them the steps.”

Wadsworth says she has seen many individuals with ASD enter vocational training having multiple college degrees but no practical work experience. “You learn a lot of soft skills in a job,” she said. “You learn a lot about how the world works, even at a fast food restaurant or in a grocery store.” She tells parents to help their children with ASD find work experience if possible.

Work experience is exactly what Project SEARCH offers. Seniors from Birmingham City Schools work as interns in several areas around UAB Hospital during the course of the year-long program. “We want these students to get competitive job experience so they can put it on their resumes,” said John Burson, a trainer with United Ability who works alongside Project SEARCH interns at UAB Hospital. The interns meet with each potential supervisor before starting work. “We like to give them interview experience,” Burson said. “And if the supervisor doesn’t think it’s going to be a good fit they can let us know.”

For several weeks after each Project SEARCH class begins in August, instructors assess the students’ existing skills and give them time “to practice skills they will be asked to do in the hospital,” said Rolanda Williams, Project SEARCH instructor at UAB for Birmingham City Schools. “We want the interns to have a full hands-on experience, so if they wish to receive further training that opportunity is there.” They also are introduced to words they will hear in the working world, Williams said, including “time off” and “calling in.”

Getting out of the comfort zone

Burson has recently been working with Eian, a student who started out in the endoscopy unit, where he was responsible for keeping procedure trays stocked and beds made. Now he’s moving to the Outpatient Clinical Diagnostic Unit, where he talks with patients and enters their information on a tablet. “He has strong attention to detail and takes a lot of pride in his work,” Burson said. “Once he learns something he just wants to work.”

Simple accommodations from supervisors and colleagues can go a long way. Wadsworth works closely with Moultrie and the AWARE program to implement accommodations for UAB employees through a longstanding partnership between UAB and ADRS. Because of the way ASD affects the executive function circuits in the brain, for example, some employees benefit from having established plans to handle down time. The Job Accommodation Network (askjan.org) is a great resource for strategies to handle specific issues, Wadsworth notes.

The AWARE team is available to assist managers who want to help their staff learn more about working with colleagues with ASD, along with other disability awareness and sensitivity training, Moultrie said: “Our job is to come into the work environment and develop strategies to help people perform to their full potential.”