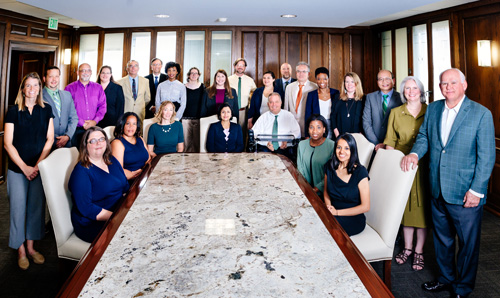 President Ray Watts meets with the 2019-20 cohort of the Blaze Leadership Academy at their kickoff meeting.On a normal Friday, Latesha Elopre, M.D., would be seeing patients at UAB Hospital and Jeremie Kirkwood would be prepping his team for an evening show at the Alys Stephens Center. With offices at the opposite ends of UAB’s 100-block campus, there’s little chance they would interact during a typical workday.

But Elopre, an assistant professor in the Department of Medicine, and Kirkwood, manager of patron services at the ASC, had other business the morning of Oct. 11. With the first hint of fall in the air, Elopre, Kirkwood and the rest of the 2019-20 Blaze Leadership Academy class set out from the Administration Building, GPS units in hand, on a massive scavenger hunt. They had an interesting mix of skills; in addition to the arts and medicine, the new class includes a lawyer, a crisis counselor, a human rights expert, an exercise biologist, a librarian and a physicist.

The team-building exercise takes Blaze participants to corners of campus they have probably never been. It’s a perfect representation of the program’s mission — to introduce up-and-coming campus leaders to the full breadth of the UAB enterprise and help them make connections that will advance both the university’s mission and their careers.

Senior leaders and Blaze alumni nominate promising faculty and staff to participate. Applicants must manage a team or major program and be seen as someone who will continue to advance and would benefit from broader exposure to UAB. Over the course of eight months, from September to April, Blaze participants meet weekly to learn more about the daily operations of an institution that is Alabama’s largest single employer, one of the nation’s largest academic medical centers and America’s Top Young University, all at the same time.

Blaze takes participants from ground level to the 30,000-foot views of the senior leaders who are establishing a vision for the future. President Ray Watts meets with Blaze participants at their first meeting and Allen Bolton, senior vice president for Financial Affairs and Administration, explains the way university finances work in a perennially popular session. Participants get personalized coaching and leadership development training, too. “You get the opportunity to learn about UAB and see how you fit in to the larger picture and how you can contribute,” said Adam Roderick, associate director of the UAB Career Center and a member of the 2017-18 Blaze class. That combination of professional and personal improvement attracted Elopre, who wrote on her Blaze application that she “wants to be thoughtful about how to be an effective administrator” and “strives to learn more about leadership” and ways she can “influence the culture at UAB.”

Blaze Leadership Academy offered the chance to learn from fellow employees “in areas vastly different from what I do,” said Amy Snow, a member of the Blaze 2016-17 cohort who is director of academic programs for INTO UAB. “I grew immensely in my self-awareness, approach to supervising and leading a team, and in awareness of effective and ineffective leadership. I also grew in my understanding of UAB as an organization — its vision and structure.” And the relationships she made continue to pay dividends, Snow added. “There are at least five persons who were in the academy at the same time as me who have become key connections in areas across campus that I interact with regularly.”

The Blaze Leadership Academy has been helping to shape the university’s next generations of leaders since 2008. With a decade of experiences and lessons accumulated, the program was paused in the 2018-19 year, said Organizational Development Manager Gerriann Fagan. “That gave us the chance to evaluate progress and align with major university initiatives coming online in that period,” including the Forging the Future strategic plan and Grand Challenge competition and feedback from the campus engagement surveys conducted in 2017 and 2019.

The 2019–2020 Blaze Leadership Academy will debut several changes “based on feedback from previous graduates,” Fagan said. Skill-development sessions in the university’s core Understand, Achieve, Build leadership competencies will be a regular part of the group’s weekly meetings. The group also will hear from more UAB experts — such as Steve McCornack, Ph.D., a faculty member in Communication Studies and an expert on deception.

The 25-member class will work in small accountability groups throughout the program to enhance the personal interaction opportunities that make the Blaze Leadership Academy special, Fagan said. The Blaze experience always culminates in group projects to improve UAB; efforts by previous classes paved the way for the UAB Staff Council and planning for UAB’s 50th anniversary celebrations. But this year the Blaze participants will work on what is perhaps the university’s most visible project: the UAB Grand Challenge, which aims to boost Alabama out of the bottom of the state health rankings within the next decade.

“We are also introducing a mentoring component so that all participants can have a mentor if they choose,” Fagan said. Snow and Roderick were quick to agree to be mentors. “My experience having mentors both on- and off-campus developed a desire in me to give back,” Roderick explained. Allison Solomon, director of UAB Disability Support Services and herself a member of the 2012-13 Blaze cohort, “has been a wonderful mentor for me, sharing wisdom, insight, support and coaching that helped propel me forward,” Roderick said. “I want to be able to have a part in that and support someone else’s journey.”

The personal coaching she received as part of her Blaze cohort and learning the ways fellow participants and invited speakers handled challenges they faced, were some of the most valuable parts of the program, Snow said. “After the academy, I missed having that kind of support. I’d like to be a part of mentoring because I feel like it can provide similar benefits.”