CRISPR short course draws crowds from UAB — and beyond 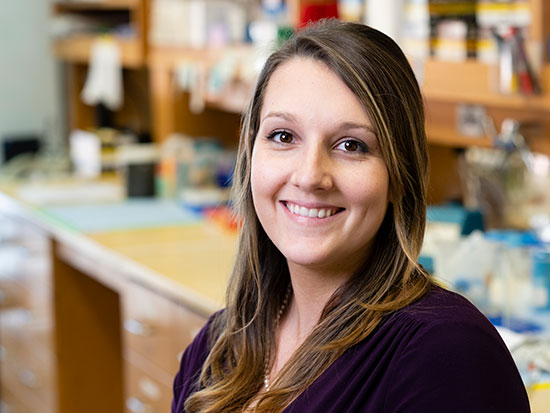 Laura Lambert uses cutting-edge CRISPR gene-editing techniques to support UAB researchers as assistant director of the UAB Transgenic & Genetically Engineered Models Core. When she offered a short course in CRISPR techniques this spring, the response from researchers on campus left her "blown away."In only a few years, the gene-editing tool CRISPR has gone from exciting discovery to near ubiquity, generating a flood of headlines and cover stories even in non-science media.

It's a hot topic at UAB as well. When Laura Lambert, Ph.D., assistant director of the UAB Transgenic & Genetically Engineered Models Core facility, offered a three-day CRISPR short course in January, she thought she would have 10 to 15 registrations. Instead, "we had about 75 people, from grad students to surgeons," said Lambert, who is an assistant professor in the Department of Genetics. "I was blown away — it's amazing how much interest there was in these CRISPR techniques. I was continually trying to find larger and larger rooms to accommodate everyone." The response has convinced Lambert to offer a second CRISPR course in the fall (after she returns from maternity leave). In the meantime, she shared some thoughts on the power of CRISPR and how it is being used to advance UAB's research enterprise.

‘Any lab with an incubator’

Lambert's goal for the course "was to set people up with the knowledge and tools to go back and actually do an experiment," she said. Knowledge is the most critical part. CRISPR may be the hottest thing in biotech, but it requires remarkably little specialized equipment. Researchers who are interested in using CRISPR to create genetically modified cell lines — which seemed to be the primary interest of most class participants, Lambert said — "don't have to have any specialized equipment," she noted. "You need to order reagents, but any lab with an incubator could do this."

A custom, gene-edited cell line can be created in a matter of weeks. Genetically modified animal models, on the other hand, take significantly longer to develop, on the order of months, Lambert said.

CRISPR-induced genetic alterations in a rat model of neurofibromatosis created by the transgenic facility at UAB.How do you CRISPR?

Participants had a range of interests, from "people with some experience who wanted to find out the best and most efficient way" to use CRISPR, "to people who, because CRISPR is such a hot topic now, had heard of it and wanted to find out if they could apply it to their work," Lambert said.

James Ferguson, M.D., falls into the latter category. "[CRISPR is] such a powerful technique to quickly assay the importance of specific genetic mutations," said Ferguson, who is an assistant professor in the Department of Urology. "And the therapeutic implications are exciting for me as an oncologist interested in bladder cancer." Ferguson's first goal is to use CRISPR in his lab to find out "which genetic mutations are critical drivers of bladder cancer," he said. "The second and much more difficult goal is, Can CRISPR be utilized therapeutically through gene-editing to cure patients with bladder cancer?"

Ferguson said learning to use CRISPR was not difficult at all. "Generating a pure gene-edited cell line can be time-consuming and can present its own unique challenges, but after the course I feel much more prepared to tackle these head on," he said. "Dr. Lambert really did an outstanding job with the limited time afforded by the course," including "outlining some of the pitfalls and directing us towards really good (and free) online software to help design our experiments."

Another participant was Mandy Croyle, a scientist working in the lab of Bradley Yoder, Ph.D., professor and chair of the Department of Cell, Developmental and Integrative Biology. Croyle, who has been using CRISPR off and on for several years, "was looking for a refresher to see what is new" in the ever-changing CRISPR world.

The Yoder lab studies the primary cilium, a hair-like projection that is found on many cell surfaces and acts as a sensory organelle. In addition to normal function, the lab is interested in "how defects in primary cilia lead to or exacerbate disease," Croyle said. "We are using CRISPR technology to knock out, introduce epitope tags or create known disease-causing mutations in primary cilia genes in cell culture. We are also working with Laura and the Transgenics core on generating transgenic mice using CRISPR that will correspond to our cell-culture CRISPR lines to help us move from an in vitro to an in vivo model."

You don't need much

Many UAB researchers work with the Transgenic & Genetically Engineered Models Core to create specialized mice and rat models, Lambert said. The facility can either do microinjection of principal investigator-provided constructs or full-service work that begins with investigators sharing their requirements and ends "with us giving them an animal that is often the only one in the world" with those particular features, Lambert said.

"The bulk of that work recently, with the advent of CRISPR, has been tailored patient mutations — changing one nucleotide out of the entire genome" to match the mutation found in a patient "and then tracking the disease for research," Lambert explained. For example, the facility works with UAB Medicine Chief Genomics Officer Bruce Korf, M.D., Ph.D., and clinicians in his Neurofibromatosis Clinic to create mouse models customized to match the often unique genetic mutations found in patients. This allows the clinicians to experiment with potential therapies in the lab and then use those results to inform the patient's treatment.

Lambert came to UAB from South Carolina for training in UAB’s Graduate Biomedical Sciences program. She earned her doctorate in 2017 in the program’s Genetics, Genomics and Bioinformatics theme. Lambert met her husband, James, in the doctoral program; now he is enrolled in the UAB School of Medicine. “He did it backward,” she said with a laugh.

Lambert also is constantly learning as the state of the art in CRISPR changes weekly. "The latest thing is tethering other proteins to CAS-9," the enzyme that guides CRISPR's molecular scissors, to upregulate or downregulate transcription, Lambert said. There are many great papers written as tutorials explaining how to use the new techniques, she said, "and I have gone through so many iterations of the process that I can easily see whether it's going to work or not."

The transgenic facility’s work is rewarding, Lambert added, citing their ability to give clinicians new insight into rare genetic mutations in diseases such as neurofibromatosis. “The most frequent mutations that we made have been found in maybe 30 people ever,” she said. “This really is personalized medicine.”