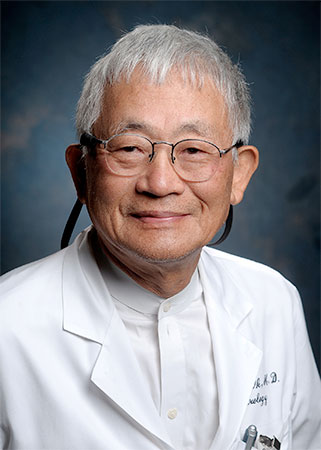 Shin J. Oh, M.D., professor in the Department of Neurology at the University of Alabama at Birmingham, will receive a lifetime achievement award from the American Association of Neuromuscular and Electrodiagnostic Medicine. The award recognizes the breadth and depth of his contributions to the electrodiagnostic and neuromuscular fields.

“Dr. Oh is internationally recognized as a pioneer in electrodiagnostic and neuromuscular medicine, and has contributed significantly to our clinical diagnosis and treatments in the field over the last four decades,” said Eroboghene E. Ubogu, M.D., professor of neurology and neurobiology and director of the UAB Division of Neuromuscular Diseases. “His legacy at UAB is unquestionable, and he is richly deserving of the 2015 AANEM Lifetime Achievement Award, which formally recognizes his career long excellence in patient care, education and research.”

Oh obtained his medical degree from Seoul National University, Seoul, Korea, followed by residency in neurology at Georgetown University in Washington, D.C. In 1970, he joined the faculty of the UAB School of Medicine, becoming chief of Neurology at the Veterans Affairs Medical Center, as well as the director of the electromyography and evoked potential laboratory, and director of the Muscle and Nerve Histopathology Laboratory, titles he would hold for the next 40 years — one of the longest such tenures in the history of American medicine.

“It is humbling to receive the highest honor given by the AANEM — the one professional organization I have treasured most throughout my career,” said Oh. “I can proudly show this to my grandchildren, telling them that their grandpa has played a small but significant role in the development of electrodiagnostic medicine.”

Oh has served in many capacities for the AANEM, including chairing numerous committees, courses and workshops over the last four decades. Through his continuous involvement with the AANEM, he has broadened knowledge of electrodiagnostic and neuromuscular medicine by identifying unresolved clinical and research issues, designing and performing research, and publishing conclusions.

A prolific author, he has produced 230 articles, 28 books and book chapters, and 237 abstracts. He is an exceptional educational writer with a particular gift for clearly and directly explaining even the most complex of physiological and histological methods. He has also written numerous texts that have become classics of the field.