by Shannon Thomason
ArtPlay drama camps introduced Marissa Hebson to Theatre UAB. Now she is graduating with a degree in musical theater. 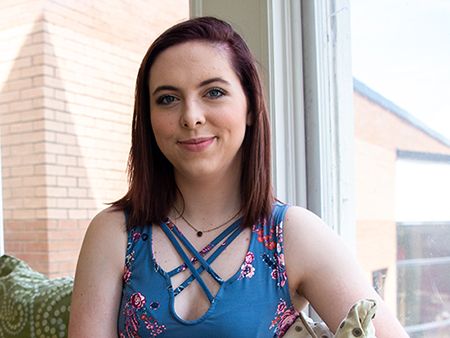 Marissa Hebson opened the door to a musical theater degree from the University of Alabama at Birmingham for Marissa Hebson.

Hebson, of Pinson, Alabama, was in seventh grade when she enrolled in a two-week musical theater drama camp presented by UAB’s Alys Stephens Performing Arts Center. The next year, that camp program became part of ArtPlay, the Alys Stephens Center’s arts education initiative.

First as a camper, then as a camp counselor and stage manager, Hebson participated in ArtPlay’s summer drama camps. Now she is graduating from UAB, starring as Peter in “Peter Pan” with Springville Community Theatre, July 25-28, and on her way to a job with the Disney College Program in Orlando, Florida.

“I truly believe that I would not be the performer, or person, I am today without ArtPlay,” Hebson said.

Her first ArtPlay camp was “Once on This Island Jr.,” performed on stage at the ASC’s Sirote Theatre. The Sirote Theatre is also the home for Theatre UAB, the performance ensemble of the UAB College of Arts and Sciences’ Department of Theatre. For Hebson’s subsequent camps at ArtPlay, she played Millie in “Thoroughly Modern Millie Jr.” and performed in “Fame Jr.” and “Legally Blonde Jr.”

Hebson was a camp counselor at ArtPlay for three summers, overseeing young campers as they learned how to sing and dance while acting, and was then a stage manager for the next summer, making sure each element of a play was ready for showtime. She was also given the opportunity to work on her creative side and help develop choreography, and essentially become a director-in-training. 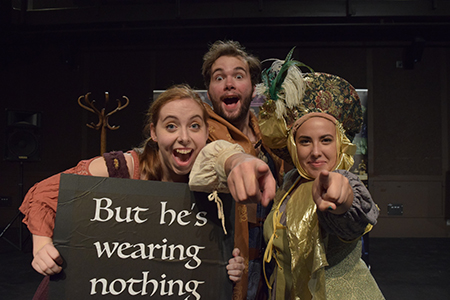 Marissa Hebson, Chance Novalis and Alicia Batterson in the UAB Theatre Tour Group performance of "Emperor's New Clothes."Through ArtPlay, Hebson says, she was introduced to the Alys Stephens Center. She always thought she would go to UAB. So when Valerie Accetta, MFA, head of Musical Theatre for the UAB Department of Theatre, called Hebson back at the Southeastern Theatre Conference to talk about the program, she was already hooked, she said, “because I was familiar with the facilities at UAB.

“My family also happen to be huge Blazer fans, so the university has always had a major place in my life,” Hebson said. “Valerie and the rest of the faculty and staff in the Department of Theatre are some of the most talented individuals I have ever come across. They want to share every ounce of their knowledge with you so you can become the best performer and person you can be. When Roy Lightner joined their ranks two years ago, I felt like the department found that missing puzzle piece that we didn’t even know we missed. The Department of Theatre is a family. We all care for each other and want each other to succeed, and our professors help get us prepared to open our business.”

For Theatre UAB, Hebson played the role of Lou Ann in “Hairspray” in 2018, and was also in the productions “Hay Fever,” “A Midsummer Night’s Dream,” “A Little Night Music,” “Vinegar Tom” and “Dancing at Lughnasa.” She counts clogging, juggling, whistling, Double Dutch jump rope, Northern Irish and British dialects, and more as performing skills, and does impressions of Elmo and Stitch. While at UAB, she worked with faculty in the Department of Theatre and the Department of Music on technique, dance and voice performance.

With her degree, Hebson hopes to perform. She loves to be in ensembles and dance, and performed with Theatre UAB’s Tour Groups, traveling around the state to perform live at schools and for libraries and community centers. To see people’s faces when they are watching these tours gave her “the best feeling in the world,” she said.

“My junior year, I was in the Bookends Tour, we did ‘The Emperor’s New Clothes,’ and it was the most fun I have had in a show,” she said. “There were four of us, and we got to make up our own raps for the show and we just got to have the most fun whenever we went out. My senior year, I was the soundboard operator on the Broadway Today Tour, which was a Cabaret group. It was really challenging to learn how to work a soundboard and how to operate it since I had never learned how to before I got the job. It was a fun tour, and I learned a lot. These tours are really a joy to be a part of.”

Hebson’s enthusiasm for theater and for UAB is palpable, Accetta says. In addition to being a strong performer onstage, she has also been the Department of Theatre’s strongest student recruiter.

“Whether at on-campus auditions or at the Southeastern Theatre Conference, Marissa joyfully shares her experiences with others, and I’ll bet she is one of the reasons we have continued to attract such wonderful students,” Accetta said.

Hebson says she hopes to work at Disney for a little while and see where that takes her.

“I also love to work with kids, so maybe something that involves both,” Hebson said. “I’m just going with the flow for now and taking every opportunity I can.”