by Shannon Thomason
The UAB Department of Music’s Henry Panion III, Ph.D., and Recording Engineer James Bevelle won for their work on the concert documentary that tells the story of a historic performance at the 16th Street Baptist Church in Birmingham, Alabama. 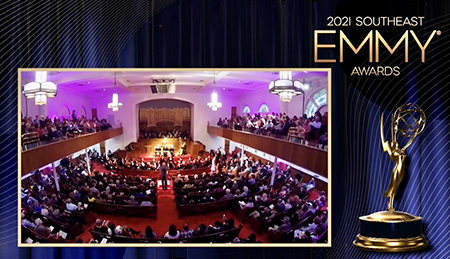 University Professor of Music Henry Panion III, Ph.D., and Chief Recording Engineer James Bevelle have been honored by the 2021 Southeast EMMY Awards for the film “Dreams of Hope.”

Panion won Best Musical Composition/Arrangement for his piece “Dreams of Hope for Solo Violin & Orchestra,” commissioned especially for this concert, and Bevelle won for Best Audio Post-Production. Bevelle is the staff recording engineer in the UAB College of Arts and Sciences’ Department of Music.

The concert documentary tells the story of a historic performance at the 16th Street Baptist Church in Birmingham, Alabama, more than 50 years after a hate crime there killed four African American girls. An initiative called Violins of Hope contributed painstakingly restored musical instruments to the event, including violins recovered from Holocaust concentration camps, symbols of resilience in the face of hate, discrimination and racism. Musicians and artists, including some from the UAB Department of Music, performed and contributed to the creation of the concert and documentary.

“Dreams of Hope” was directed by Panion and filmmaker David Macon and presented and distributed by American Public Television. With a captivating storyline written by Macon, the film blends concert performance footage with behind-the-scenes interviews chronicling the event’s preparation and reflecting on its significance. Alongside the Dreams of Hope Orchestra, the concert features solo violinist Caitlin Edwards, who returned to her hometown of Birmingham to play the Auschwitz violin, vocalists Valerie Smith and Lenora Goodman-Panion, dancer Kelsey Ebersold, and the Miles College Choir.

The film has been broadcast on PBS stations from coast to coast more than 600 times since its 2020 release to an audience of more than 170 million people and has been highlighted during both Black History Month and Jewish Holocaust Remembrance holidays.

Mayor of the City of Birmingham Randall Woodfin described the film as “a powerful testimony of inclusion, unity and hope for a generation of leaders. It is my desire that this message of love, empathy, compassion and triumph will be embraced there and throughout the world in these most troubled times.”