by Shannon Thomason
Inspired by the myth of Echo and Narcissus, the new work was created by alumna Rebecca Jones and shaped through a residency on her family’s farm, a 2021 UAB Department of Theatre staged reading, and collaboration with faculty, students and alumni. 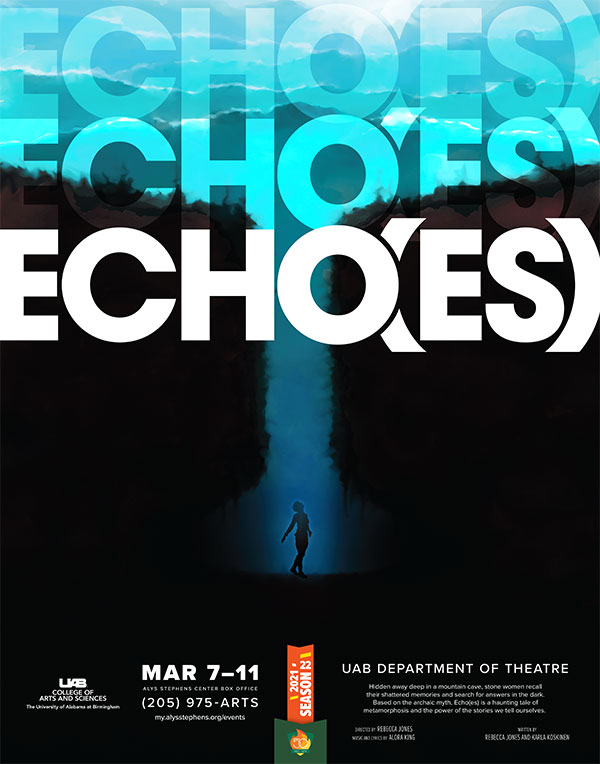 See the story of Echo and Narcissus reimagined in a haunting new, original work — created by Theatre UAB alumni — at the University of Alabama at Birmingham, from March 7-11.

Hidden away deep in a mountain cave, stone women recall their shattered memories and search for answers in the dark. Based on Ovid’s archaic myth, “Echo(es)” is a haunting tale of metamorphosis and the power of the stories we tell ourselves.

Theatre UAB is the performance company of the UAB College of Arts and Sciences’ Department of Theatre.

“Echo(es)” has been on its own journey of metamorphosis since 2015, when Jones recognized the patterns of narcissistic abuse couched in the metaphors of the myth from “Metamorphosis.” She wanted to hear Echo tell her side of the story. What would it take to heal? Inspiration also came from another myth: La Loba, as depicted in “Women Who Run With the Wolves” by Clarissa Pinkola.

In 2018, she began writing in collaboration with the Brooklyn-based theater company August Corps. Jones’ family farm in Valleyhead, Alabama, has a large cavern that served as the inspiration for Echo’s cave in the play. The next summer, August Corps brought the cast from New York to stay in residency at the farm and to workshop the play as a site-specific performance in the cave. Jones received the 2019 SITI Lab Residency in New York to continue developing the “Echo” project that fall.

“Echo(es)” is now a reality thanks to the many artists who brought this story to life, Jones says.

Brett Everingham, UAB class of 2020, co-wrote with Jones the next iteration of the script, which was invited by the UAB Department of Theatre as a staged reading in 2021. King, of Boonsboro, Maryland, also joined the project. The script was given an overhaul after the workshop, and Koskinen stepped in to co-write the show now titled “Echo(es).” The music was also re-written as original pieces by King. Theatre UAB alumna and guest artist Kendra Weeks is costume and scenery designer.

The cast is Madi Carr of Mobile, Alabama, Isabelle Johnson of Memphis, Tennessee, and Jazzy Pedrosa-Watson of Madison, Alabama, as the Echoes Ensemble; Matthew Kelly of Phenix City, Alabama, as Man; Emily Cluelee of New Orleans, Louisiana, as Writer; and Tess Lenzen of Madison, Wisconsin, as Healer.