by Shannon Thomason
Students in the Department of Art and Art History got a pinstriping tutorial from Michael Swann of Swann Graphics, then applied their talents to the black Ford Ranger, which will be donated to WBHM 90.3 FM. 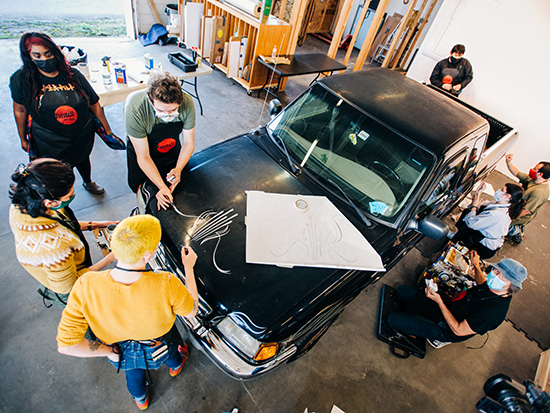 Students who usually paint on canvas got the chance to try their hands painting a professor’s ride at the University of Alabama at Birmingham.

Professor of Painting Gary Chapman invited guest artist Michael Swann of Swann Graphics to give a presentation on pinstriping to students in his College of Arts and Sciences’ Department of Art and Art History painting class. Swann does vintage pinstripe restoration work for Barber Vintage Motorsports Museum.

Chapman thought it was a good opportunity to get the students out of the classroom and into UAB’s 2300 Studios to paint as a team.

The black Ford Ranger truck belongs to Associate Professor Doug Barrett, who teaches graphic design in the Department of Art and Art History. It will be donated to Birmingham’s public radio station WBHM 90.3 FM through its vehicle donation program. Barrett says he has been an avid WBHM listener since 2008 when he came to Birmingham.

“WBHM is a wonderful local resource and I have supported it over the years,” Barrett said. “When I purchased a new car, donating the old car to WBHM seemed like a logical way to further my support.”

Interested in a career in the visual arts? Use UAB’s Find your degree portal to learn more about degrees in the arts.

When Chapman suggested using his old truck to teach students about pinstriping, with the help of local expert Swann as the instructor, “it all clicked,” Barrett said.

Class started with a short talk, then Swann prepared simple designs to get the students started. In teams of two or three, the students took over painting UAB and WBHM logos as well as stripes and designs, like skulls, in silver and gold paint.

Students were given paint brushes for participating and first, second and third place prizes were awarded, with all participants also being given aprons. The prizes were provided by Forstall Art Supply. 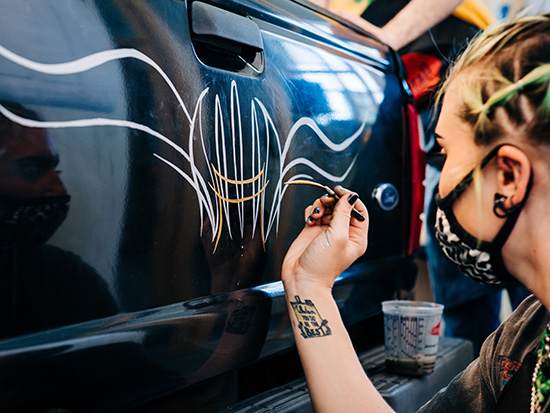 To Chapman, the most important part of bringing in the guest artist was exposing his students to a person with an art degree who has created their own career.

“What is great about Michael Swann is that he developed a skill set of pinstriping with which he can go to rallies and to Barber, but he also does his own work and shows in museums and galleries and on top of that he runs a gallery,” Chapman said. “So, he has three different business ventures — just a really great exposure for my students of how people with an art degree can carve out their own career.”

Swann works in a variety of mediums and techniques that include painting, drawing, printmaking, airbrushing and pin-striping. He maintains three studios plus a woodworking shop, where he builds his own stretchers, panels and frames. He is Alabama’s ambassador to the Portrait Society of America.

WBHM is much more than a radio station — it is an essential public resource that enlightens and enriches its audience and makes strong connections to communities through journalism that is fair, credible, accurate and honest. Free from commercial and political influence, WBHM seeks to make Birmingham and Alabama a better place to live by educating, engaging and entertaining the people of its metro area and state. WBHM is dedicated to the idea that an informed citizenry is vital to democracy and a thriving economy, and it celebrates diversity, innovation and lifelong learning.