by Shannon Thomason
Presented by the Alys Stephens Performing Arts Center, this Young Concert Artist performance is free and open to the public with advance registration.
Per longstanding UAB protocol, members of the media must first receive approval from and/or be escorted by UAB University Relations to be on UAB property, including inside UAB buildings and outdoor campus property (e.g., Campus Green, parking decks). 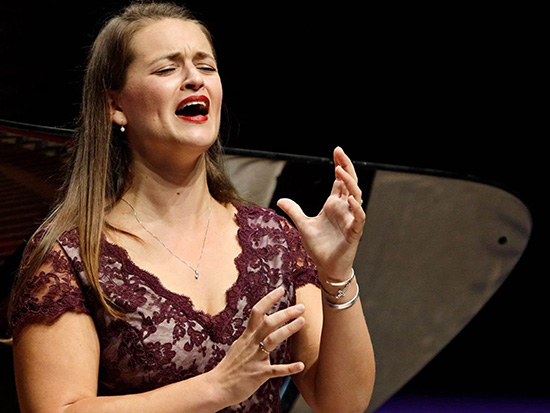 The 7 p.m. performance will be in the Alys Stephens Center’s Jemison Concert Hall. Call 205-975-2787 or visit AlysStephens.org.

Mezzo-soprano Moore is making waves as a young artist of versatility and depth, according to her artist’s statement. An award-winning opera and concert singer, she was awarded First Prize in the 2020 Young Concert Artists International Auditions and was a top prize winner at Gerda Lissner Lieder/Song Competition in 2019.

For her appearance as Dorabella in “Così fan tutte” at The Juilliard School, OperaWire praised her “strength as an actress” and “undeniable sex appeal.” In ​2021, Moore had major debuts: As the sorceress Medea in Handel’s “Teseo,” a tour-de-force role that showcased her trademark vocal agility, at the Juilliard School, then as a member of the prestigious Santa Fe Opera Apprentice Program for Singers, where she sang the role of Ino in the world premiere of “The Lord of Cries” by John Corigliano and librettist Mark Adamo.

On the concert stage, Moore’s art song repertoire spans the genre, from German Lieder and French Mélodie to Scandinavian song and new music by living American composers. Passionate about using song to connect with audiences, in 2015 she co-founded LYNX, an art song initiative whose mission is to amplify diverse voices through newly commissioned song, and to link communities through inclusive concerts and education programming.​