After beginning his theater career at UAB while still in high school, Corner’s Kevin Allinder is now graduating and moving forward to grad school.

Kevin Allinder, 22, of Corner, Ala., a graduating senior theater major at the University of Alabama at Birmingham (UAB), has been selected for Purdue University College of Liberal Arts’ master of fine arts lighting design program. 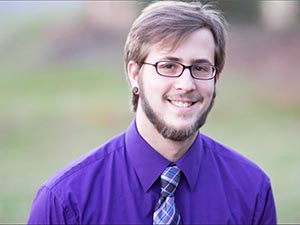 Allinder has designed several Theatre UAB productions, including the most recent, “Bat Boy: The Musical.” Last summer he was the lighting designer for the Southern Appalachian Repertory Theatre in Asheville, N.C., where he designed for the company.

“The experiences gained from working in the Department of Theatre have given me invaluable experience that has placed me at a high level upon exiting the bachelor’s program,” Allinder said.

In February, Allinder attended the University/Resident Theatre Association’s unified auditions and interviews conference in Chicago, where he met with 15 potential graduate schools. Purdue’s master’s program interested him most. Only a limited number of applicants are accepted to the program, and Allinder’s half-time graduate assistantship includes a tuition waiver, health benefits and a living stipend.

“I visited the campus and toured within the department,” Allinder said. “I knew that this was the place for me to continue my education. Luckily, they made me an offer on the spot while I was visiting, and I accepted.”

After his time at Purdue, he plans to start a career as a lighting designer.

Allinder was a junior at Corner High School when he first learned about the Theatre UAB program.