by Shannon Thomason
ArtPlay and The Acting Studios will present “Th’ Burning: A Play with Music”  June 12-15 in UAB’s Alys Stephens Center. It recounts the violence and bus burning in Anniston, Alabama, on Mother’s Day in 1961. 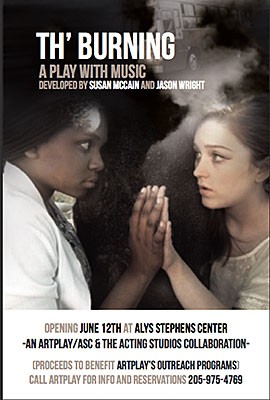 ArtPlay and The Acting Studios will present “Th’ Burning: A Play with Music” at 8 p.m. nightly June 12-14, with a 2:30 p.m. matinee June 15, at the University of Alabama at Birmingham’s Alys Stephens Performing Arts Center.

ArtPlay is the Alys Stephens Center’s home for education and outreach. ArtPlay Teaching Artist and The Acting Studios Director Susan McCain wrote and will direct “Th’ Burning.” The play was conceived and developed by McCain along with Jason Wright, who is the play’s artistic and vocal director, as well as a performer in the play. ArtPlay has suggested a minimum $5 donation per admission, with proceeds benefiting ArtPlay’s education and outreach mission. The play is recommended for ages 12 to adult due to mature language and themes. For reservations or information, call 205-975-4769 or visit www.ArtPlayasc.org.

The play’s action is driven by the violence and bus burning that took place on Mother’s Day in Anniston, Alabama, in 1961. Inspired by humanity’s enduring battles and by those who transcend the controls of rigidity, the play accentuates ongoing life as it finds survival in the most unconventional ways, McCain says. The play features two groups: the Freedom Riders, whose journey was to test the Supreme Court’s desegregation ruling of interstate travel, and the Opposing Forces, who represent those whose fear relished the idea of maintaining a segregated lifestyle.

People from across the region auditioned for the play. ArtPlay students, Make It Happen Performance Ensemble students, high school and college students, and professional performers make up the cast.

The cast of the Freedom Riders includes Wright, of Anniston, as Brother Amos; Amina Johnson of Ashville as Josephine; Eleanor Brown of Birmingham as Ruth; Michael McDonald of Montgomery as Van and Sludge; Stephen Richardson of Los Angeles as Soulman; DeEric Williams of Gadsden as Roy; Matthew McVay of Rhode Island as Samuel; Shawna Conti of Birmingham as Pearl; and Lillian Davis of Birmingham as Mary. The neighboring teens and children in the play are Zoe Gooden of Clay as Doris; Kalyn Williams of Birmingham as Kim; and Bradley Seals of Hoover as Talley.

The cast of the Opposing Forces includes Melody Dailey of Moody as Elizabeth; Laura Lundy Wheale of Georgia as Lila; Spencer Lundy of Georgia as Reverend Jones; Daniel King of Gadsden as Officer Red; Allan Jones of Birmingham as Al; Carolyn Collier of Birmingham as Louise; Brittany Lane Harris of Georgia as Anna; Hannah Gulledge of Birmingham as Catharine; Audra Mickel of Prattville as Nan; and Sadie Chapman of Birmingham as Edie. Emily Hayes of Birmingham plays neighboring teen Sandy, with Raz Voinea-Griffin of Vestavia Hills and Weil Thornburg of Tuscaloosa as “White Boys” Lyle and Ben. The play’s production manager is Tiffany Walls of Ontario, Canada, with stage management by Olivia Hayes of Homewood. Production assistant is Lee Lundy of Cedartown, Georgia, with Thurston Hamby of Birmingham, crew.

“The story that is told is very heartfelt; it’s just human beings dealing with survival and dealing with life, and in the midst of certain difficulties we’ll find that sometimes the best way to survive those is to simply love each other and laugh and share something that is joyful,” McCain said of the play. She hopes audiences will enjoy the story and come out of the theater with renewed love for their fellow man.

“We are all in this together,” McCain said. “There is no time or space for egos, for hate, or anything that gets in the way of someone else’s dreams. We all have dreams and more than a right to pursue those dreams."

The Acting Studio class follows the legendary Lee Strasberg’s design, beginning with sensory work — the heart of the “Method” — followed by scene and character development to empower the actor.