by Shannon Thomason
The evening’s program will include Beethoven, Haydn, Schubert, Mendelssohn and Brahms; the second half by Dvorak, Ravel and Shostakovich. 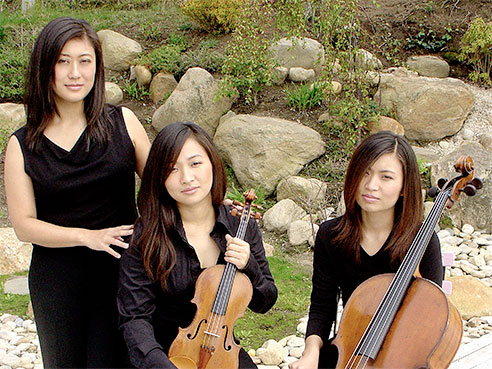 One of classical music’s most notable rising young ensembles will perform a program of Beethoven, Haydn, Schubert, Mendelssohn, Brahms and more Thursday, Feb. 12, presented by the University of Alabama at Birmingham’s Alys Stephens Performing Arts Center.

The Jung Trio features sisters Jennie, piano, Ellen, violin, and Julie, cello, and each contributes her own warmth and impassioned sensibility to the collaborative force.

The concert is set for 7 p.m. in UAB’s Alys Stephens Center, Reynolds-Kirschbaum Recital Hall, 1200 10th Ave. South. The first half of the evening will consist of single movements of the piano trio by Beethoven, Haydn, Schubert, Mendelssohn and Brahms; the second half by Dvorak, Ravel and Shostakovich. Tickets are $32.50. Call 205-975-2787 or visit www.AlysStephens.org. This ASC performance is made possible in part by Highlands School.

Earlier that day, the Jung Trio will present an ArtPlay Meet the Artist On the Road show at an area school at 10 a.m.

The trio was featured as Young Artists International Debut Artists at the 10th International Laureates Festival in Los Angeles and also made its debut at Walt Disney Concert Hall. In the summer of 2009, the trio made its European debut, performing in Berlin, in Germany and at the Mozarteum in Salzburg, Austria. That same year saw the release of their recording of Dvorak’s Trio in F minor, Op. 65, by Groove Note records.

The sisters received degrees from the University of Toronto and the New England Conservatory of Music, and all three graduated from Yale University School of Music. Most recently, pianist Jennie received her doctorate in musical arts from The Juilliard School. She is on faculty at the Claremont Graduate University and is a chamber music coach at the Colburn School for the Performing Arts in Los Angeles. Ellen and Julie perform frequently with iPalpiti Chamber Orchestra and record for commercials and movie and television soundtracks. The Jung Trio is currently trio-in-residence at Vanguard University in Southern California and is working to build the chamber music program at the school.