by Shannon Thomason
The tribute concert will feature a dozen musicians from Birmingham and around the Southeast together for one night to honor King’s legacy of blues. 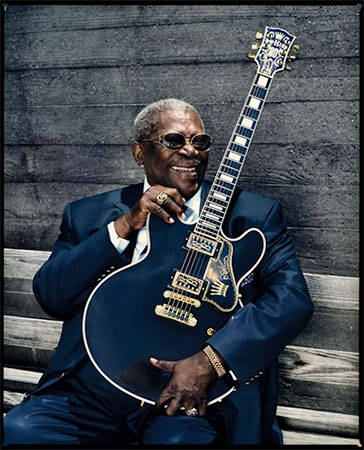 Celebrate the life and music of blues legend B.B. King with a free tribute concert presented by the University of Alabama at Birmingham’s Alys Stephens Performing Arts Center.

Set for 7 p.m. Monday, Aug. 17, the tribute concert will feature a dozen musicians from Birmingham and around the Southeast together for one night to honor King. Join artists Elnora Spencer, Ona Watson, Chad Fisher, CeCe Phillips, Sean Michael Ray, PJ Spraggins, Joseph Stallworth, Joey Sommerville, Marc Phillips and GrooveDaddy, Microwave Dave, Norris Jones, Tim Boykin and UAB Artist-in-Residence Eric Essix as they pay homage to one of the greatest guitarists and musicians of all time.

The concert, free and open to the public, will take place in the ASC, 1200 10th Ave. South. VIP seating is available for current ASC members. For VIP seating, contact the ASC at ASCMembership@uab.edu or call 205-996-6113.

A 15-time Grammy Award winner, King began his influence on rock and blues music in the 1950s, and would go on to become a global ambassador of blues in his half-century career.

Born Riley Ben King on Sept. 16, 1925, in Indianola, Mississippi, King moved to Memphis at age 22 and began his music career on Beale Street as a disc jockey titled “Beale Street Blues Boy.” After shortening the name to “Blues Boy,” King topped the Billboard R&B chart in 1952 with his first hit “Three O’Clock Blues,” and his renowned career began. Indianola is home to the $14 million B.B. King Museum and Delta Interpretive Center, which opened its doors in 2008.

With his signature Gibson guitar, “Lucille,” King released more than 50 albums and logged between 200 and 300 shows a year, even into his 70s. Known for hits like “The Thrill is Gone” and “Everyday I Have the Blues,” the blues ambassador sold millions of records worldwide. King surpassed 15,000 shows around the world in his illustrious career. He was inducted into the Blues Foundation Hall of Fame in 1984 and into the Rock and Roll Hall of Fame in 1987. King held many awards and honors, including the Grammy Lifetime Achievement Award and the Presidential Medal of Freedom. King passed away on May 14, 2015, at the age of 89.