by Shannon Thomason
Works by Mozart, Anton Webern and Schubert are on the program when Paris-based Hermès Quartet performs an intimate recital in the historic ArtPlay home. 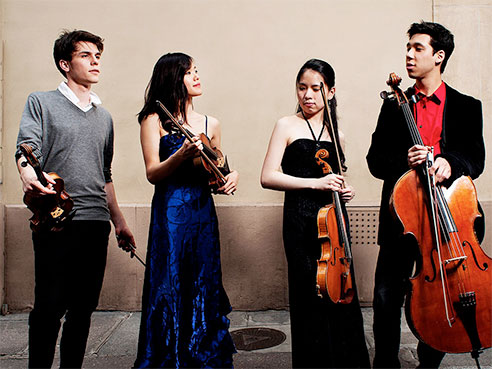 ArtPlay is the home for arts education for the University of Alabama at Birmingham’s Alys Stephens Performing Arts Center.

The recital is set for 7 p.m. in the ArtPlay House, 1006 19th St. South. The Patty McDonald ArtPlay Parlor Series exclusively features Young Concert Artists. On the program is Mozart’s Quartet No. 14 in G Major, K. 387 “Spring”; Webern’s Five Movements Op. 5; and Quartet No. 14 in D minor “Death and the Maiden” by Schubert. Tickets are $37.50 and include hors d’oeuvres and beverages. For tickets, call 205-975-2787 or visit www.AlysStephens.org.

The Washington Post said the Paris-based Hermès Quartet “… will likely take their place among the top quartets of our time.” The members of the Quartet — violinists Omer Bouchez and Elise Liu, violist Yung-Hsin Lou Chang, and cellist Anthony Kondo — met at the Lyon Conservatory and formed the ensemble in 2008. Since then, the internationally acclaimed foursome has performed in many of the most prestigious European venues.

The Quartet was the winner of the 2012 Young Concert Artists International Auditions and made its U.S. debuts to rave reviews at the opening concerts of the YCA Series at Carnegie’s Zankel Hall and the Kennedy Center’s Terrace Theater. In the U.S., the group has given recitals at the Lied Center of Kansas, the University of Georgia and the Friends of Chamber Music in Texas.

In addition to their engagements currently scheduled in the U.S., their busy European performance schedule includes appearances at Festival de Musique de Menton and Festival Été Mosan in France, Carro Music Festival in Italy, Krzyzowa Music Festival in Poland, as well as in Germany and Switzerland, and tours of South America and Japan.

The Quartet currently holds the Helen F. Whitaker Chamber Music Chair of YCA and the Florence Gould Foundation Fellowship, and is the artist-in-residence at the Queen Elisabeth Music Chapel in Brussels.