by Shannon Thomason
Beninese singer Angélique Kidjo is a Grammy Award-winning singer and activist for Africa's women and girls.

World-class musician and humanitarian Angélique Kidjo, one of Africa’s most celebrated singers, will perform at 8 p.m. Friday, March 23, presented by the University of Alabama at Birmingham’s Alys Stephens Performing Arts Center.

During her visit, Kidjo, who is also an empowering voice for women’s rights, human rights and social justice, will also speak at UAB’s Institute for Human Rights. Her lecture, titled “Give Her Wings: Teach Girls and Empower Women,” is scheduled for 6 p.m. Thursday, March 22, and is free and open to the public. 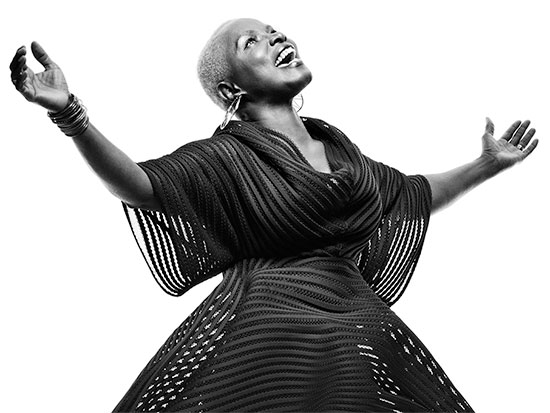 Kidjo is a three time-Grammy Award-winning Beninese singer, noted for her diverse musical influences and creative music videos. Her art roves across boundaries, genres and ethnicities, finding the connections that link musical forms from every part of the world, while still bonding with her own traditions. Kidjo is an enthusiastic collaborator, having worked with countless artists, including Alicia Keys, Bono, John Legend and Philip Glass. This spring, she will release her reimagining of The Talking Heads’ 1980 masterpiece, “Remain in Light.” Recorded with superstar producer Jeff Bhasker (Kanye West, Jay Z, Beyoncé), Kidjo has reinterpreted this opus with electrifying rhythms, African guitars and layered backing vocals.

“I work with everyone who believes that music is the tool of peace,” Kidjo said, “For me, music is the only form of art that connects the entire world.”

Tickets to Kidjo’s performance presented by the Alys Stephens Center are $40, with $10 student tickets. Tickets are $10 for UAB faculty and staff. Call 205-975-2787 or visit www.AlysStephens.org.

On top of her music are her activism and her passion for Africa’s women and girls. Last year, she was awarded Amnesty International’s Human Rights Award for her work standing up to injustice. With her infectious energy, her passion for performance and her inspiring story, Kidjo is truly a unique speaker as she seamlessly weaves singing into all of her speeches. A UNICEF Goodwill Ambassador, she is the co-founder of the Batonga Foundation, an organization that promotes secondary education for girls across Africa. She is also the recipient of the Crystal Award from the World Economic Forum in Davos and the Amnesty International “Ambassador of Conscience Award.”