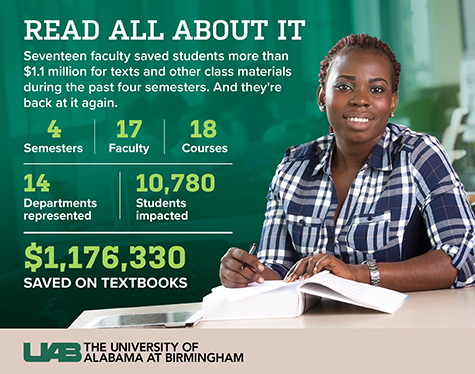 In four semesters, 17 faculty members at the University of Alabama at Birmingham have invested time and energy on behalf of students, with substantial results. By creating their own online assets in Canvas, using rental textbooks or older editions, and identifying free online resources, faculty saved students more than $1 million on instructional materials.

The stipend enabled faculty to develop and implement a plan to reduce the amount of money their students spend on textbooks and other instructional materials. Approximately 10,780 students have benefited to date.

Finding alternative methods for students to access books and resources is popular at the junior college level, says Brian Moon, associate director for Academic Innovation at the CTL. Many go as far as ensuring all core curriculum materials are free by using open-access textbooks, he says.

UAB’s AIM grants are more broadly focused, says Scott Phillips, Ph.D., CTL director. Adopting open-access textbooks is effective, but it also can require an entire overhaul of syllabuses and lesson plans. Instead, AIM grants enable faculty to pursue any option that would save students money.

As the cost of education rises, faculty recognize “textbooks are the only way they can directly impact the costs to students,” Moon said. “They say, ‘We can’t really bring down tuition costs or costs of living,’ but they can make a very direct impact just by choosing a cheaper option for instructional materials.”

Sami Raut, Ph.D., assistant professor of biology, has received two AIM grants. The first was in spring 2017 for a biology course, BY 101, and she worked with her textbook publisher to create a custom version in both a loose-leaf and e-reader format that costs around $24. This replaced materials/text that cost around $100.

When Raut reapplied for the second grant for spring 2018, she focused on the second of two introductory biology courses, BY 124, and created a custom e-textbook that cost around $47.

Raut was spurred in part by her desire to lend a helping hand to transfer students, who might have taken the first introductory course at another institution that used a text different from what UAB required.

“I thought, if I customized the book, it’s good for Generation Z students who love having everything online, and it would be a boon in disguise for the transfer students,” Raut said.

Raut plans to implement reduced-cost textbook options in each of the courses she teaches, because she knows students often are required to spend hundreds — and some thousands — of dollars on instructional materials per semester.

“Until they stop me, I’m going to keep doing it,” she joked, before becoming more serious. “I can’t tell you how grateful the students are. I was blind to how much they were spending.”

Connor Lancaster, a sophomore majoring in music technology from Calera, Alabama, took Raut’s BY 101 class in fall 2018. He usually spends about $1,000 per year on textbooks, he says, so when he discovered the e-textbook for Raut’s course, he was excited about saving money and not having to sift through material he would not need for class.

“It’s important to provide students with cheaper textbook options because most students are low on money,” he said. “Also, it was nice not being overwhelmed by the material we wouldn’t be covering on exams.”

A less-expensive textbook helps relieve the financial burden and the pressure to meet it, says Harper, who had not encountered a brand-new e-book or physical book for less than $100 in her first semester at UAB.

“Not everyone can afford to pay for books,” she said. “If Dr. Raut hadn’t provided the option to purchase a book for less, I don’t know how I would have obtained the materials needed to be successful in the classroom.”

When chemistry instructor Mitzy Erdmann, Ph.D., received an AIM grant for her general chemistry labs CH 106, 108, 116 and 118 in spring 2017, she approached the idea of textbook savings from a decidedly personal angle. As a chemistry student at Loyola University, she had taken a job at the campus bookstore so she could rent her books — but often angled to get them free whenever she could, she told the UAB Reporter in November 2017.

“It was somewhat soul-crushing,” Erdmann said. “I’d try to sucker the publishers to give them to me when I did orders over the phone.”

By developing original materials and using online resources in Canvas, Erdmann reduced the per-student cost to $30 for both semesters of her chemistry course’s labs, which enroll around 1,500 students per semester. The savings to students in these labs is staggering — about $180,000 per semester.

Erdmann also connects the dots between savings on instructional materials to reducing food-insecurity among students. At UAB, students can turn for help to Blazer Kitchen, a campus food pantry that has provided more than 85,000 meals since it opened in March 2017. But not every campus has such a resource.

“Twenty-six percent of students are choosing to either pay tuition or buy groceries,” she said, citing an Inside Higher Ed story published in 2016. Similarly, the Chronicle of Higher Education featured the ongoing struggle in a November 2018 post, “Hungry to Learn.”

“Bringing a lab manual’s cost down by $30 is two months’ worth of food at the Blazer Kitchen,” Erdmann said.

Anna Jones, a junior neuroscience major with a chemistry minor from Memphis, Tennessee, says she spends $600-$700 per year on textbooks. Jones, who was a student in Erdmann’s chemistry lab in spring 2017, now is one of her teaching assistants.

“Being able to the lower the cost of textbooks helps ease the financial burden on students, especially for out-of-state students; I can say that personally,” Jones said. “The burden of student loans — it’s enough on us already — so I’m happy to see faculty at UAB try to implement cheaper options.”

Erdmann tries to keep experiences like Jones’ in mind when interacting with her students.

“We could spend a little bit more time and find more open-source resources,” she said. “We make a lot of jokes that ‘they think they’re adults,’ but there are so many who have been getting tuition and book money on their own. I really hope more instructors see our students as people.”

Chris Minnix, Ph.D., associate professor of English and director of the Freshman Composition and Developmental Studies program, is no stranger to finding solutions for UAB students. In 2017, he and other English instructors worked to revitalize the department’s freshman comp courses and created a developmental program that focuses on the writer a student could become in a more productive and positive learning environment.

Minnix’s solution to reduce textbook costs in freshman English courses was relatively simple: Offer a rental option. Freshman composition has one of the biggest footprints in UAB’s core curriculum, because essentially every student is required to take it, he says. He remembers reading a March 2018 story in the Chronicle of Higher Education that said that, despite scary numbers such as the $1.5 trillion Americans owe in student loan debt, a student’s college education can teeter on the fulcrum of a much smaller number — sometimes just a thousand dollars for small-ticket items such as leftover tuition or class fees.

“That made me think about textbooks,” Minnix said. “One thousand dollars for textbooks is fairly typical for a year of college courses. Some textbooks can top out at $200 for a single course. Publishers in composition often try to keep costs lower, but even there a single book can cost more than $100.”

Minnix worked with the UAB Bookstore, which partners with the CTL to fund the AIM grants, to create rental agreements for the books his students needed. Rental options can reduce the costs of books up to 80 percent, depending on the course.

Now, he is looking for ways to pursue custom texts and resources for freshman composition students to achieve more savings. Minnix admits that customizing course texts can be time-consuming for already busy faculty, but he has a tried-and-true method he recommends.

“Create a folder in Evernote, Devonthink, Zotero or another note-taking application titled ‘Possible Readings for Class,’ and as you’re going through daily life and you encounter newspaper articles, syllabuses from colleagues, things you find in blogs and through academic Twitter, just store them in the folder,” he advised. “What you’ll find is that you end up filling that folder quite quickly over little bits of time, rather than devoting a week or two at once.”

In this way, Minnix created an online anthology of readings for freshman English courses that other faculty can access and add to for their composition courses. Readings are linked directly to UAB Libraries databases, so the materials are both secure and free for student access. He also recommends using nationally recognized and free online resources such as the Purdue Online Writing Lab (OWL) and University of South Florida English Professor Joe Moxley’s Writing Commons, a peer-reviewed, open-education resource for college-level writers, and other free resources for teachers of the humanities.

“I think we need to push for more long-term solutions to drop the price even more,” he said.

Minnix also pursues less costly or free textbook options for his graduate students. In his teaching practicum EH 646, he chose textbooks that were free to all graduate students through the publisher Bedford/St. Martin’s professional resources library.

Shannon House, a graduate student in the English department from Sylacauga, Alabama, says she and classmates were excited not to have to purchase books for the practicum, because four texts were required.

“Cheaper textbook options like rentals or ones provided by the professor take some of the burden off students who also have to pay for parking permits, meal plans or dorms,” she said. “If students can’t afford to buy their books, having different options sets them up for success in their classes.”

The UAB Bookstore has been a supporter of the AIM initiative since its inception, say Moon and Phillips, and the campus staple is now upping the ante. Starting this semester, AIM grants will increase to $1,500 from $1,000, and faculty can apply for both spring and fall semester courses. The bookstore also is awarding an additional $2,500 grant for faculty moving exclusively to open educational resources; it will provide the faculty resources and quizzes to use alongside those open texts.

“The faculty can sometimes see the bookstore as an enemy or a negative, and a lot of people don’t realize how much they give back to campus,” Moon said.

As more faculty receive AIM grants, the savings will continue to add up: Instructors continue to implement their changes even after the initial semester ends.

“The idea was to reward faculty who implement changes that are sustainable,” Moon said. “It’s like a snowball rolling down a hill.”