Dustin Fast plans to incorporate artificial intelligence and machine learning in his efforts to build better eye-activation software as he enrolls in UAB’s neuroengineering doctoral program. 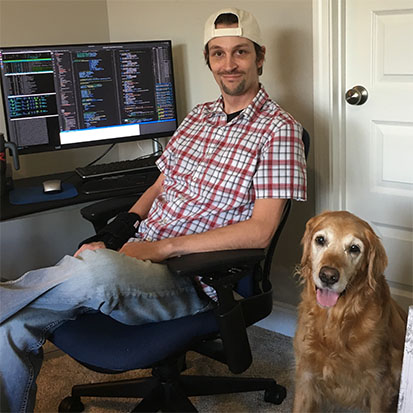 Fast will use his skills as artificial intelligence software designer to improve eye-activation software. We see it in the movies all the time: the computer whiz furiously typing at his keyboard to bypass the security system, or open the un-openable door for the hero. For real computer whizzes, such as Dustin Fast, computer programming is not that dramatic, but Fast can do things on a computer keyboard that are beyond the skills of most people.

Rather, he used to be able to do so.

Fast, an Army veteran who spent nearly a year in Iraq with the 101st Airborne Division, works for Boeing in Huntsville, Alabama, as an artificial intelligence software engineer. He writes code all day long, and he is good at it. He uses a lot of complex key strokes and shortcuts in his coding, many he designed himself. Until he began to notice that his right hand was not working quite right.

“My right hand was getting stiffer, and it ached,” Fast said. “I thought it had to do with sitting at a computer all day. I thought it was carpal tunnel syndrome.”

He lost the ability to grip things with that hand, and had muscle tremors up his right arm. A physical therapist recommended he see a neurologist. In March of 2020, he saw Peter King, M.D., a professor in the Department of Neurology at the University of Alabama at Birmingham and an expert in neuromuscular disease. King told Fast his condition was not carpal tunnel syndrome, but something much worse. Fast had amyotrophic lateral sclerosis, or ALS, commonly known as Lou Gehrig’s disease.

ALS is a progressive neurodegenerative disease that affects nerve cells in the brain and the spinal cord, leading to the loss of muscle movement. With voluntary muscle action progressively affected, people eventually lose the ability to speak, eat, move and breathe.

For Fast, now 38 years old, loss of the ability to move his hands and arms would mean the loss of his career. The loss of his passion.

“Work is my happy place,” he said. “I’m surrounded by really smart people doing really amazing, really important work. Even with a diagnosis of ALS, I knew I wanted to keep working.”

So Fast looked into eye-activation software for computers. This software allows people with loss of mobility in their hands and arms to use a computer through eye-tracking technology. Users move a mouse and click based on where and how they look at the screen. The technology exists and is available. But for Fast, it has limitations. 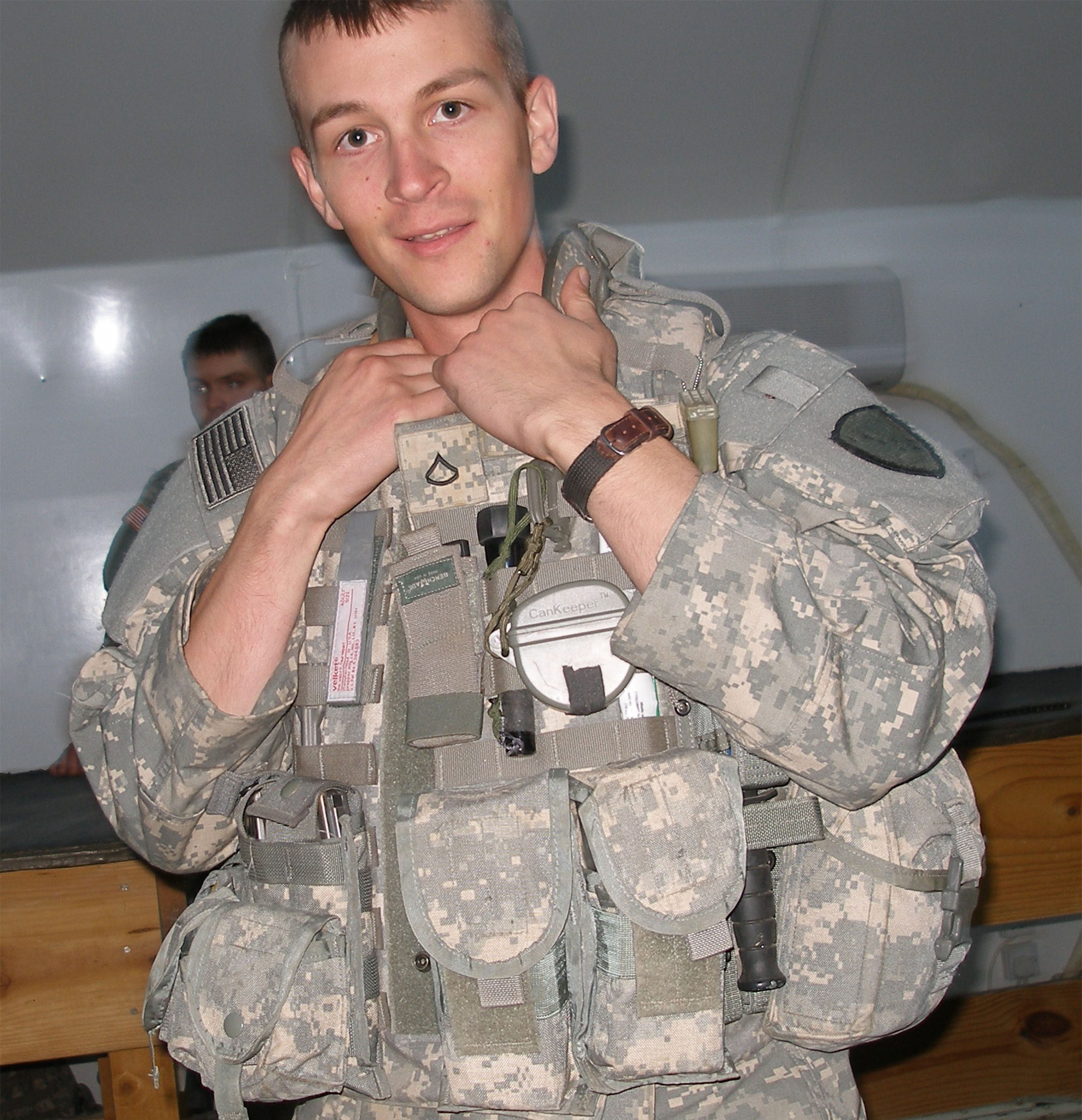 Fast spent a nearly a year in Iraq with the 101st Airborne Division.“What is available on the market now is sufficient for someone who wants to send an email, surf the internet, do online shopping or watch a movie on their iPad,” he said. “It is not sophisticated enough for a programmer to write code, which is what I need.”

“Dustin told me that he had ideas on using artificial intelligence to improve eye activation software,” said King. “He needed a solid infrastructure to implement his ideas, including mentors to help guide him and access to experts in fields outside computer programming. Fortunately, an option at UAB had just been put in place.”

By combining faculty expertise in neurobiology, neuroscience and engineering, the program will train a new generation of neuroengineers to advance understanding of neurodegenerative disorders and other brain diseases and develop novel therapeutics, neuroprosthetics, and tools to restore lost brain function and improve patient outcomes.

King reached out to the co-directors of the program, Lynn Dobrunz, Ph.D., in neurobiology and Gregg Janowski, Ph.D., in engineering, along with Lori McMahon, Ph.D., the dean of the UAB Graduate School.

“Dustin Fast and his desire to create a better eye-activation software system fit perfectly with our program,” Dobrunz said. “We can link him to the experts he needs and give him the tools to accomplish his goal.”

Fast, who describes himself as a lifelong learner, will be the third enrollee in the new doctoral program and is a recipient of a Blazer Fellowship from the Graduate School, awarded to top students to provide financial support.

“Typically, students take a variety of classes during their first year in a doctoral program while determining the project that will become the centerpiece of their educational experience,” Janowski said. “Dustin’s eye-activation project is already underway, and we will tailor the program to provide the base set of courses he will need while he continues work on that software.”

Fast says that current eye-activation software requires a user to look at an area on the screen for a specific time in order to activate a click. Some systems use autocorrect to finish a sentence that has been started when writing text. 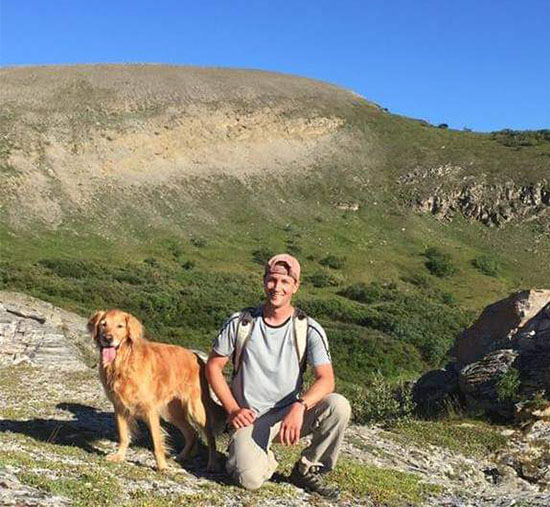 Fast, shown here hiking with his dog, Baxter, will be part of the first class of students in UAB's new neuroengineering doctoral program.“I don’t use a keyboard the way most other people do,” Fast said. “I need a tool that is intuitive and has the same throughput on a keyboard as my fingers did. There will be challenges, but I see the path to the solution. I have some possibilities in mind, and I believe I can solve the challenges.”

Fast says he will put his background in artificial intelligence and machine learning to use as key elements for his project.

“You could describe the brain as an extremely powerful computer,” he said. “It works by encoding information, very much the way machine learning works.”

Fast is scheduled to begin the doctoral program in January. Dobrunz and Jankowski currently are recruiting students for the fall 2021 semester. The program hopes to enroll five or six students each year.

“Dustin’s project is the kind of endeavor that could ultimately benefit many people, and we are committed to getting him the resources he needs,” Dobrunz said.

“Clearly there are potential benefits of his project for others with disability,” King said. “Improvement in eye-tracking software could have tremendous benefit for many people with impaired use of limbs whether from neurodegenerative disease, stroke, spinal cord injury, or direct limb trauma.”

“I am excited to begin the Ph.D. program,” Fast said. “This started as a way for me to continue working. Now it’s becoming a way for me to help make the world a better place.”