UAB students are working to develop assays — like apps for an iPhone — for one of the nation’s leading biotechnology companies.

Do you know what kind of fish you are eating? At least one-third of seafood sold in the United States is mislabeled by species, according to the Food and Drug Administration. But now there’s an app for that. Or soon will be. University of Alabama at Birmingham biotechnology student Jeff Hicks is developing a rapid test to detect fish species from a sample and determine if it harbors any disease-carrying organisms. 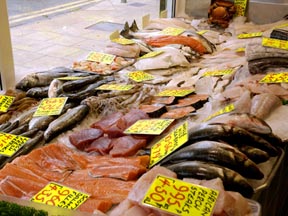 Hicks and other students in UAB’s biotechnology program are working with HudsonAlpha Institute for Biotechnology in Huntsville, Ala., to create apps, or assays, for its iCubate system, which provides rapid diagnostic testing for disease-causing pathogens and microorganisms based on genetic code.

iCubate was developed by Jian Han, M.D., Ph.D., a faculty investigator at HudsonAlpha. The fully automated, enclosed system will enable detection of multiple targets in one sample, and it outperforms DNA testing used by the FDA, which may require days or weeks to produce results.

“We are opening the technology to allow students to create an app for iCubate and sell it on our online store,” said Han, who drives to Birmingham twice a week to work with student developers. “I challenged them to develop an app that would protect human health or the environment,” Han said.

Student apps will be evaluated on a competitive basis, and the five best will be evaluated for commercial potential by the UAB Research Foundation, Han and the iCubate team, said Tino Unlap, Ph.D., an associate professor for the program.

Hicks says his assay will reveal if the fish labeled as red snapper is a cheaper, perhaps inferior fish or if canned tuna is really tuna in about four hours. Hicks said it should take one to two months to develop his quick-test app, which he expects to be valuable to the $80 billion seafood industry. “This app has the potential to make a huge impact in an industry that needs it,” he said.

Kathy Nugent, Ph.D., director of the biotechnology program in the Department of Clinical and Diagnostic Sciences, says the partnership is mutually beneficial. “This enables students to tap into their entrepreneurial spirit and test the product immediately. If it works, the potential is enormous,” she said.

“Biotechnology is key to answering not only health and environmental questions, but economic issues as well. The number of jobs that could be potentially created from the fish app is huge. And it was an idea created by one of our students,” Nugent said.