It’s been called the signature injury of the American military campaigns in Iraq and Afghanistan: traumatic brain injury, or TBI. An estimated 253,330 TBIs occurred in armed forces personnel between 2000 and 2012, according to the Department of Defense. 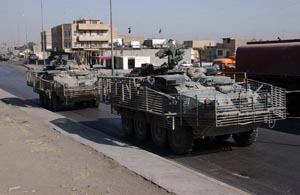 “The nature of combat in Iraq and Afghanistan has resulted in the largest proportion of traumatic brain injury in our nation’s history,” says Laura E. Dreer, Ph.D., assistant professor and director of psychological and neuropsychological clinical research services in the Department of Ophthalmology at the University of Alabama at Birmingham. “Blast-related injuries are overwhelmingly the most common types of wounds seen in Operation Iraqi Freedom/Operation Enduring Freedom. This represents a significant public health hazard.”

Soldiers recovering from a TBI face a long and difficult road, but Dreer says a second victim often emerges when those injured soldiers come home: the caregiver, often a family member or spouse thrown into duty with no training, no preparation and little help.

“Following treatment and rehabilitation, these caregivers are often expected to serve as extensions of formal health-care delivery systems by providing physical and/or emotional support without proper preparation and ongoing training, education, or payment for their services once the service member returns home and begins to re-integrate back into the community,” Dreer says. “Unfortunately, research has not adequately addressed the unique long-term needs of these informal military caregivers of service members with combat-related TBI.”

Dreer is the recipient of a three-year, $600,000 grant from the National Institute for Disability and Rehabilitation Research to create a program to give family caregivers specific strategies and resources they can use to help cope with the long-term challenges associated with caregiving and to facilitate a wounded soldier’s return to society.

The program has a long title: Cognitive Behavioral Therapy for Caregivers of Operation Iraqi Freedom/Operation Enduring Freedom Service Members with Combat-Related Traumatic Brain Injuries. Dreer calls it a kind of family caregiver boot camp, although it’s telephone-based and not quite as intense as basic training.

But Dreer’s program really is basic training for caregivers in several important areas. Patients with TBI often have cognitive and emotional issues on top of physical injuries. These changes can impact the dynamics of the military family.

“In addition to physical complications, the rates of mental health problems such as post-traumatic stress disorder, anger and suicide have also been increasingly documented,” Dreer says. “Other negative consequences of exposure to combat include increased utilization of mental health services, problems with employment, relationship conflict, and verbal and physical aggression toward others post-deployment.”

Dreer says it is a tall order to ask untrained family caregivers to cope with all of those issues. The skills training she has developed, conducted through a one-hour telephone call once a week for six weeks, is designed to provide some basic concepts and approaches caregivers can implement in their daily interactions with their injured service member. Dreer, whose training is in psychology, created the program. The program will hire a therapist with a master’s degree in psychology along with military experience to facilitate the training.

“In the wake of the longest-running war in the nation’s history, unprecedented rates of injuries, and no clear-cut end to the global war on terrorism in the near future, it is imperative that we begin to focus research on efforts to enhance the lives of our other ‘soldiers’ who serve on the home front,” Dreer says. “We need empirically informed investigations to determine whether training military caregivers in specific coping strategies may help to minimize or possibly prevent distress and help caregivers enhance their abilities to assist injured service members back into society and strengthen military families post-injury. Skills to enhance resilience and post-traumatic growth are key components of the intervention along with problem-solving training strategies.”

Dreer says VA medical centers, military outreach programs such as the Wounded Warrior Program, the DOD and rehabilitation hospitals need a behavioral health-based intervention to meet the long-term demands that tax caregiver’s coping abilities and adversely affect their health and well-being, particularly in rural and underserved areas where access to health-care services is largely absent.