by Shannon Thomason
More than 2,789 students will graduate from UAB this spring, and many will celebrate at the university’s commencement and doctoral hooding ceremonies. 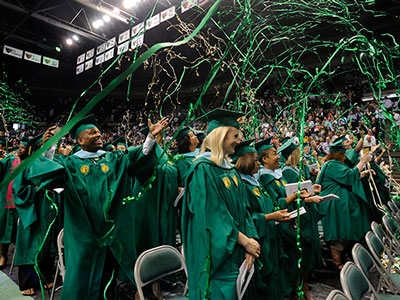 The University of Alabama at Birmingham (UAB) will hold two commencement ceremonies and a doctoral hooding convocation Saturday, May 11, 2013. More than 2,789 students will graduate this spring.

No tickets are required for guests, and there is no limit to the number of guests each student may invite. For guests, seating is first come, first served, and the arena doors will open at 8:30 a.m. for the 9:30 a.m. ceremony and at 1 p.m. for the 2 p.m. ceremony.

Events will begin on time. University officials recommend guests arrive early and leave non-essential bags at home or in the car; mandatory checks of all bags entering Bartow Arena will be conducted and could slow entry.

“We expect our usual large crowds as we help our graduates celebrate the fruits of their hard work,” said UAB President Ray L. Watts. “With this being my first commencement as president, I have not looked forward to a graduation ceremony this much since I received my undergraduate degree from UAB.”

A to-do list for graduates, as well as information for guests, is available on the commencement website.

The bearer of the UAB academic mace for both commencement ceremonies will be David Schwebel, Ph.D., UAB associate dean in the College of Arts and Sciences (CAS) and professor of psychology. Schwebel is the recipient of the 2013 Caroline P. and Charles W. Ireland Prize for Scholarly Distinction. Director of the UAB Youth Safety Lab, Schwebel researches the prevention of unintentional injuries of children and adolescents. He is renowned for his work with pedestrian safety in crosswalks.

Rachel Rosales, the undergraduate speaker for the morning ceremony, will graduate with bachelor’s degrees in biology and philosophy. Rosales is a National Merit Scholar and a member of the University Honors Program (UHP) and the Early Medical School Acceptance Program (EMSAP). She has received a UAB Presidential Scholarship and Provost Award for four years. She was named Outstanding Woman Undergraduate Student for 2013. As a member of the UAB Ethics Bowl Team, she carried the team in three of five cases at the Florida regional in 2009 and was a leader of the 2010 and 2011 teams that won national championships. She plans to attend medical school; as a physician, she hopes to focus on community health and care for underserved populations.

Sarah E. Turner, the graduate speaker for the morning ceremony, will receive a master’s degree in computer forensic security management. She received her Bachelor of Science degree in criminal justice with honors in 2011 from UAB. While in that program, Turner completed internships with the Alabama Bureau of Investigation, where she assisted with cybercrime investigations, and the United States Postal Inspectors, where she assisted with fraud investigations. She has been a spam and malware analyst since 2009, as well as a lab supervisor in UAB’s Computer Forensics Research Laboratories. She plans to pursue a career in computer forensics/security.

Brandon A. Sherrod, the undergraduate speaker for the afternoon ceremony, will receive a bachelor’s degree in biomedical engineering. He has been in the University Honors Program, Biomedical Engineering Society, Pi Kappa Phi Fraternity and Tau Beta Pi Engineering Honor Society. Sherrod has received a UAB Presidential Scholarship, UAB School of Engineering Dupuis Leadership Scholarship and UAB National Alumni Society Dean’s Scholarship for the School of Engineering. He has been on the Academic Dean’s List and UAB President’s List. He has been an active student leader in many campus organizations and volunteers for Habitat for Humanity, Outreach Abroad, Children’s of Alabama Pediatric Anesthesia Care Unit, UAB Into the Streets and PUSH America Philanthropy Fundraising.  He hopes to work as a research assistant for a year after graduation, before attending medical school.

Seongwon “Sing” Choi, the graduate speaker for the afternoon ceremony, will receive a master’s degree in business administration. Choi received her Bachelor of Science degree in athletic training from Oklahoma State University in August 2011. She has served as a strategy consultant intern with HealthSmart through the UAB Division of Preventive Medicine. Since June 2011, she has been a graduate assistant athletic trainer in UAB’s Department of Sports Medicine. She has been on the President’s Honor Roll and Dean’s Honor Roll. She received the UAB MBA Alumni Association Scholarship. In 2009, she received a Korean Honor Scholarship, which is awarded by the Korean Embassy to only 100 people in the United States. She is fluent in English and Korean. Choi plans to pursue a career in healthcare management consulting or healthcare administration and hopes to seek further educational opportunities in healthcare policy development and global health.

The UAB Graduate School doctoral hooding and commencement ceremony will be held at noon at UAB’s Alys Stephens Performing Arts Center, 1200 10th Ave. South, where at least 45 candidates will accept the university’s highest degree. This event is for those candidates receiving the Ph.D., Dr.PH., Ed.D. and D.Sc. degrees.

Other commencement ceremonies include: