by Shannon Thomason
UAB art students have created a space-age stage mural for a concert presented by Vulcan Park to honor the late musician Sun Ra, a Birmingham native. 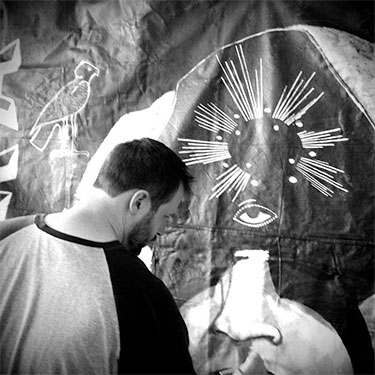 On Thursday, April 10, people in the city will celebrate one of Birmingham’s beloved, and funky, sons: Sun Ra, born Herman Blount in 1914.

Ra, who died in 1993, was a musician, composer, bandleader, poet and philosopher whose work reflected nearly the entire history of jazz. Despite his claims that he was from Saturn, Birmingham still lays claim: He was inducted into Alabama’s Jazz Hall of Fame in 1979.

This week, while the Birmingham Seven perform Ra’s music for “Sun Ra: Musician, Philosopher, and Poet,” the audience will see a set created by University of Alabama at Birmingham students, faculty and staff. UAB Assistant Professor of Art Doug Baulos, MFA, and his Department of Art and Art History art studio students created the stage backdrop mural in homage to Ra. The inspiration for the mural, completed in just one week, is the 100th anniversary of Ra’s birth. The working title is “Fate in a Pleasant Mood.”

All participating students are from Baulos’ Introduction to 2-D Design, Intermediate Painting and Independent Advanced Study in Studio Art classes. They are Steven Stark, Hannah Retig, Jacob Phillips, Rob Clifton and Vincent Rizzo, who did most of the type and the bird on the mural, Baulos says. Baulos and studio technician Bonard Hughins also contributed.

More than 30 students in both of Baulos’ Introduction to 2-D Design classes are making graphic ornaments for the mural, based on their research of Sun Ra, Egyptology and jazz, Baulos says.

The April 10 concert, set for 5:30 p.m. at Vulcan Park and Museum, will be an entertaining and fascinating look at Ra’s unique view of the world. Birmingham Seven leader Daniel Western will offer commentary throughout the show. The performance will also integrate excerpts from Ra’s film “Space is the Place.” Birmingham artist Lonnie Holley will have three new works on show and is set to perform. Admission is $10.