Schwartz, a veteran and nurse, is the keynote speaker for this year’s Mental Health Summit, held Aug. 22. 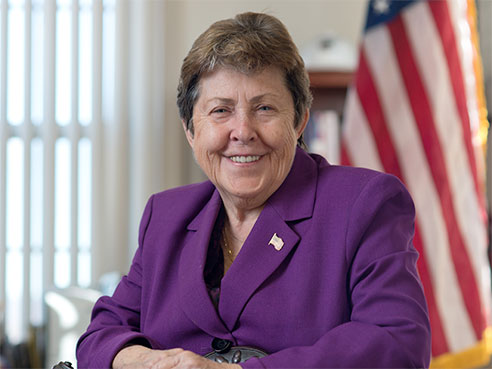 Linda S. Schwartz, nominee for assistant secretary of Veterans Affairs for Policy and Planning at the U.S. Department of Veterans Affairs, will be the guest of the University of Alabama at Birmingham School of Nursing and the Alabama Statewide Area Health Education Center Program on Aug. 21-22 and will address staff, students and visitors as part of the 2014 Veterans Community Mental Health Summit.

Schwartz will speak to UAB Nursing faculty, staff and students from 3-4:30 p.m. Thursday, Aug. 21, and is the keynote speaker for the Mental Health Summit, which will be held from 9 a.m.-4 p.m. Friday, Aug. 22, at the Doubletree Hotel, located at 808 20th Street South. Schwartz’s keynote address will begin at 9:45 a.m.

Schwartz, who was a U.S. Air Force nurse during the Vietnam War, is the Connecticut commissioner of Veterans’ Affairs. She was nominated to the assistant secretary position by President Barack Obama in August 2013 and is awaiting confirmation. She received a doctorate in public health in 1998 from the Yale School of Medicine, and is the first woman to serve as Veterans’ Affairs commissioner for the state of Connecticut.

“Dr. Schwartz is a champion of veterans and truly a national star, known for a long history of involvement in nursing and veteran organizations where she has been an advocate and activist devoted to healing the wounds of war,” said Doreen C. Harper, Ph.D., dean of UAB’s School of Nursing. “It is an honor to have a patriot and nurse of her stature be a part of our local Mental Health Summit. Her experiences as an Air Force veteran who suffered an injury during her service, and as a nurse and advocate, have given her firsthand knowledge of the veterans health care system and the challenges it faces. Her insight will be invaluable in helping our efforts to train nurses and other health professionals to care for our growing veteran population.”

The purpose of the Mental Health Summit is to bring together key stakeholders in the community with the goal of enhancing access to mental health services and addressing the mental health care needs of veterans and their family members residing in Birmingham and surrounding areas.

UAB’s School of Nursing has taken strides to improve the care of veterans in several ways, including partnerships with Joining Forces and the Birmingham Veterans Affairs Medical Center; improving care through research as part of the Veterans Health Administration National Quality Scholars Fellowship Program; and studying the effects of palliative care for veterans, including home-based hospice practices for terminally ill. The school also offers the Veterans Career Advancement in Nursing Program (Veterans CAN!), through the Health Research Services Administration, to help veterans who have served as an LPN or medic/corpsman in the military to transition into a professional nursing career.

UAB’s School of Nursing is one of only 18 other schools of nursing in the country to be designated a Veterans Affairs Nursing Academy by the U.S. Department of Veterans Affairs’ Office of Academic Affiliations. This designation ensures that the School of Nursing and the Birmingham VA Medical Center will work together to train compassionate, highly educated nurses to look after the health care needs of the nation’s veterans.

“The UAB School of Nursing has a long history of serving the health care needs of veterans and their families,” said Harper, who currently is serving a two-year appointment as part of the Department of Veterans Affairs’ Special Medical Advisory Group. “We will continue to work to play a prominent role in aiding veterans through care and opportunity, and being able to have someone we can learn from like Linda Schwartz come here will only aid us in these endeavors.”

Schwartz can identify with injured military.

She was nearly sucked out of a C-141 aircraft in-flight when a hatch blew off when she was a reservist in 1983. Her resulting injuries — similar to a stroke or “the bends” — left her unable to work for several years and left her involuntarily discharged from the service, an event she has described as a low point in her life.

Schwartz received help from a naval medical unit and mentors at Yale; but her experiences with care immediately after that event cause her to worry about troubled veterans, especially with the complexity of the system managing veterans’ benefits.

Her initiatives in Connecticut resulted in reducing homelessness among veterans and adding access to a variety of support services for veterans returning from Iraq and Afghanistan. She also initiated a renovation of the state’s veterans home in Rocky Hill, modernizing living quarters, improving privacy and comfort for veterans, and constructing a state-of-the-art unit to house veterans with Alzheimer’s.

“Having a chance to learn from Dr. Schwartz is going to be a fantastic opportunity for our school and for health professionals across the state of Alabama,” said Cynthia Selleck, Ph.D., associate dean for Clinical Affairs and Partnerships in the School of Nursing and director of the Alabama Statewide AHEC. “Her powerful story and experiences are unique and truly make her the type of leader our nation needs to better support the veteran community.”