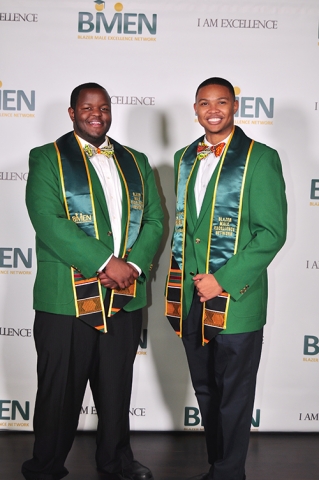 Joshua Peeples, left, and Devin BonnerTwo University of Alabama at Birmingham students who have shown excellence in the classroom, on campus and in the community have been awarded with Green Blazers, an honor now in its second year.

The program’s objectives include providing students with resources to enable them to achieve their educational goals, increasing retention and graduation rates by providing students with valuable information, providing mentors and mentees with the opportunity to become leaders, and enhancing the relationship between the university and its students — all through mentors.

Undugu translates to “brotherhood” in Swahili and represents the significance of the event, Bonner says. The Undugu Male Gathering event recognizes BMEN mentors, mentees, alumni and others who are involved with the program.

Peeples became a BMEN member in his sophomore year and says he has truly enjoyed the experience. He grew up in Alabaster and acquired a passion for electrical work when he realized how his father, as an electrical technician, was able to help his community through his trade.

“Everyone who is a part of the program strives for excellence, and this award is a crowning achievement,” Peeples said. “I hope receiving this reward will help me serve as a role model for those studying behind me to continue to do well and strive to be the best they can be despite any opposition they will face.”

According to Peeples and Bonner, the mentoring program has benefited each member of BMEN in various ways, whether it be their communication skills, leadership skills or professional development.

“As a BMEN mentor, I have realized the responsibility and honor of being an example for someone who looks up to you,” Peeples said. “I have also become more passionate about assisting others to be the best they can be.” He hopes his mentees can be inspired by their mentors by recognizing they can achieve success in their college and professional careers, as well as life in general, regardless of the hardships they have had to face throughout their journeys.

Bonner says the mentor program has helped him navigate through his college career. He landed a spot on the dean’s list and says he strives every semester for this achievement. He is proud to have done it as a senior majoring in biomedical engineering. As he progressed through BMEN, he was able to expand his skill set as a mentor and eventually became a lead mentor.

Both recipients of the Green Blazer agree on the positive impact BMEN has had on their lives. From being a mentee to becoming mentors, Bonner and Peeples have grown as leaders and professionals from the Peer Mentoring Program, and they will continue to strive for excellence.