Owner gets the key to UAB’s fifth Habitat home

by Shannon Thomason
The project is funded by the UAB Benevolent Fund, the employee charitable arm of UAB. 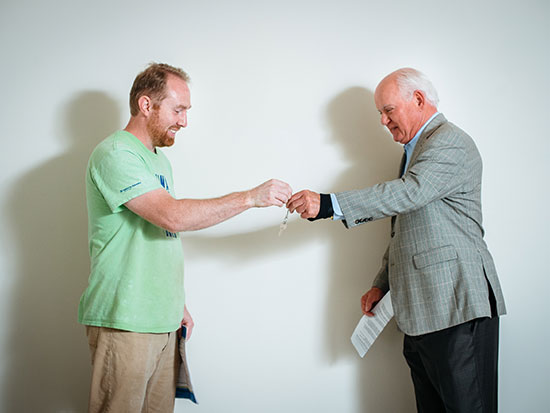 That key opens the door to his new home, built by Ferrell with the help of Habitat for Humanity of Greater Birmingham, his friends and family, and 523 UAB employees who gave nearly 2,000 hours of work.

The effort is part of a project funded by the UAB Benevolent Fund, the employee charitable giving arm of UAB, established and governed by employees. Work began Sept. 20, and the Eastwood neighborhood home was dedicated Thursday, Nov. 1. Ferrell told the gathered crowd the day was very special for him.

“I’m experiencing a range of emotions,” Ferrell said. “I’m so excited because I’ve never had an experience like this. It’s a once-in-a-lifetime opportunity, and it’s fulfilling a lifelong dream. I’m so grateful to UAB, the Benevolent Fund there, and the many volunteers that came out to help with the build. It’s an honor to be the recipient of so much giving and effort.”

Ferrell and his family and friends have put more than 155 hours of work into building the three-bedroom, two-bath home alongside volunteers. He will continue working on the home and plans to move in in coming days. Ferrell is self-employed as a handyman — his business is called “Ames Works” and specializes in yard work, basic handyman jobs and chores — and learned a lot during the process. He will contribute another 150 hours of service to Habitat as part of his homeowner’s agreement.

Volunteer Stefanie B. Varghese, Ph.D., program manager of the UAB School of Optometry’s Vision Science Graduate Program and UAB Benevolent Fund Council member, has worked on two UAB Habitat for Humanity builds. She called it “the experience of a lifetime” and an excellent team-building task to do with co-workers.

“It is a bit intimidating when you first sign up, because you’re thinking to yourself ‘I don’t know how to build a house,’” Varghese said. “Once you’re on the build site, the contractors and the site coordinators show you how to do what needs to be done for that day. At the end of the build day, you just take in what has been accomplished and you sit back and say ‘I did that.’ It really is rewarding.”

There is a misconception of what Habitat for Humanity is, Varghese says, with some who think that recipients are getting the house free.

“This is definitely not the case,” she said. “The recipients have to put in volunteer hours to qualify, and they do have to pay a mortgage. For those who are on the fence about volunteering, I would say do it even if you have any hesitation in doing so. I’m not going to lie; it’s hard work, but it is truly rewarding.”