University of Alabama at Birmingham 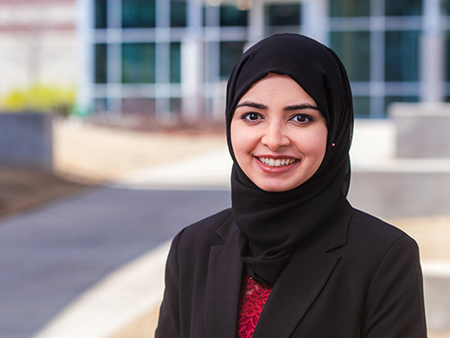 Sheikh attended medical school at the Aga Khan University in Karachi, Pakistan, where she was conferred the “Best Graduate” award. She subsequently completed her general surgery residency at York Hospital, York, Pennsylvania. Sheikh graduated from UAB’s Abdominal Transplantation and Hepatobiliary Surgery Fellowship in 2020.

During her residency, Sheikh considered specializing in gastrointestinal surgery; but after experiencing the gratification of changing an individual’s life by successfully transplanting a kidney or liver, abdominal transplant surgery was her new goal. Curing end-stage organ disease and offering a renewed chance at life for a patient became a passion for Sheikh.

Sheikh had several barriers to overcome before she could become a transplant surgeon. The Journal of Pakistan Medical Association reported in 2016 that 69.6 percent of registered medical doctors were male. When she decided on the field, Sheikh knew it was rare for a female medical doctor to specialize in surgery, let alone abdominal transplantation.

“Transplant surgery in Pakistan is not easily accessible, and there are only a few established transplant centers,” Sheikh said. “It was such a privilege and honor to attend one of the finest medical schools in Pakistan and then complete the rest of my training in the United States.”

According to a recent study conducted by Aga Khan University Hospital, where Sheikh attended medical school, 72 percent of female surgeons in the AKUH Department of Surgery said cultural barriers to a surgical career existed because of their gender. Further, about 40 percent of the women report having been discouraged by family or close friends from pursuing surgery as a career field.

Not only did she face gender barriers, but Sheikh also had personal challenges. She simultaneously began her two-year fellowship while single-handedly caregiving for her 7-month-old daughter. At the time, her husband, current UAB Acute Care Surgery Fellow Zain Hashmi, M.D., was still finishing his general surgery residency at the Sinai Hospital of Baltimore.

“It was certainly difficult raising a child and completing my fellowship, but I had to remind myself of my ‘why,’” Sheikh said. “I chose UAB because of the potential for growth, mentorship and stability. Dr. Jayme Locke is an incredible role model for me. She was the only female faculty in transplant at UAB when she started here. I have been with the UAB Division of Transplantation for just over two years, and I feel like I am barely scratching the surface with how far I can go.”

As an only female child from a conservative family, Sheikh said she was lucky her parents permitted her to capitalize on the available opportunities and sent her off into the world to pursue her goal of becoming a transplant surgeon. Both her mother and father are retired physicians —her mother is an OBGYN, and her father practices family medicine.

“My parents were and continue to be supportive of my pursuing my dreams to become a transplant surgeon, even though they often received side comments from the community, doubting my career and life path,” Sheikh said. “When I first started out on this journey, it felt like a distant dream; but now here I am, living my dream every day.”