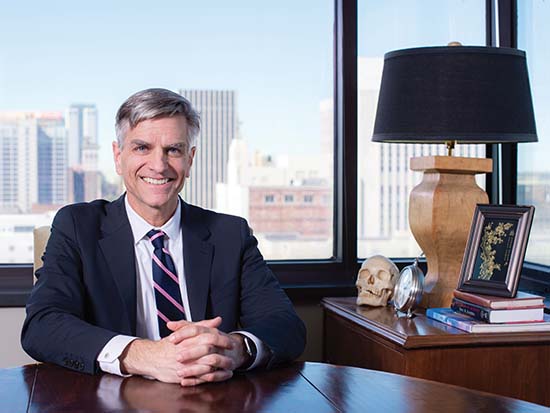 James Market, M.D., Ph.D., chair of the Department of Neurosurgery in the Heersink School of Medicine
Photography: Lexi CoonIn a first in Alabama, UAB Hospital has opened a new surgical suite with the ability to take MRI images while the surgery is underway. This allows surgeons to see images in real time as an operation is progressing.

The first procedure in the new suite was Feb. 8. James Markert, M.D., Ph.D., chair of the Department of Neurosurgery in the Heersink School of Medicine, University of Alabama at Birmingham, performed a craniotomy to remove a patient’s brain tumor.

“The value of an intraoperative MRI is that we can look at brain images taken while the surgery is underway in the operating room, to confirm that we have resected as much of the tumor as possible, while leaving healthy brain tissue intact,” said Markert, James Garber Galbraith Endowed Chair of Neurosurgery. “Instead of looking at imaging that was taken hours or even days before, we are able to see the structures in the brain in real time, giving us the most complete and accurate view of the surgery.”

Markert says that, in procedures such as craniotomies, where a portion of the skull and brain covering is removed, the brain can move or shift slightly, which can render MRIs taken prior to the surgery less accurate. The ability to produce an MRI during surgery provides the most up-to-date information possible.

“The boundary between a brain tumor such as a glioma and the healthy brain tissue surrounding it is not necessarily well-defined,” Markert said. “Gliomas invade healthy brain cells by sending tendrils of tumor cells out from the primary tumor. The MRI helps a surgeon determine whether they have captured all of the tumor cells. We can recalculate as we operate.” 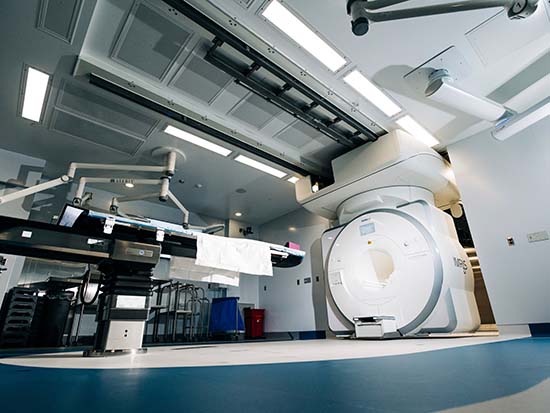 Photography: Andrea MabryThe new UAB surgical suite employs the IMRIS Hybrid Operating Suite, which consists of two operating rooms with the MRI positioned in a third room between the two. Fitted to a special track, the MRI machine can be moved into an operating room in about 90 seconds. The machine slides over the surgical table until it is properly positioned.

Its primary use will be for brain tumor cases and some laser surgeries. Deep brain stimulation procedures for epilepsy, Parkinson’s disease and other conditions will also benefit from the intraoperative MRI. It may also have utility for blood vessel malformations and removal of cysts.

The intraoperative MRI suite is the only one in Alabama, and one of only four in the mid-South region encompassing Kentucky, Tennessee, Arkansas, Louisiana, Georgia and Alabama.