Determination and inspiration led to the gift of new lungs

Steve Harrison has a new chance at life, thanks to someone else’s becoming an organ donor.
Written by: UAB Medicine Marketing
Media contact: Adam Pope 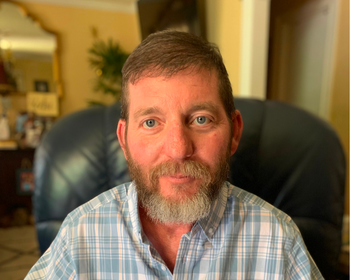 Steve HarrisonOn their wedding day 34 years ago, when Steve and Lynne Harrison vowed to be at each other’s side in sickness and in health, neither could have imagined the journey ahead.

Steve, 55, says he was “healthy as a horse” and working as a construction foreman when he contracted the Delta variant of COVID-19 in September 2021. Unvaccinated, Steve’s initial flu-like symptoms quickly snowballed, prompting him to leave his home in Dayton, Tenn., and spend almost two months in a nearby hospital’s intensive care unit.

His doctor believed that his going on a ventilator was the best course of action, but Steve resisted — even though the doctor told Lynne that, without one, Steve’s chance of survival was only 30 percent.

“It was a fight,” Steve said. “But if something happened, I wanted to be able to talk to my kids.” Instead of a ventilator, Steve opted to lie on his belly and wear a mask with high-flow oxygen. “The mask wore my nose down to the bone.”

After a stint at a physical rehabilitation facility, Steve returned home, but only for five days. He developed COVID-related acute respiratory distress syndrome, or ARDS, and ended up in the emergency room. “They thought I was going to die,” Steve said.

In fact, the palliative care team was working with Lynne and the couple’s three adult children to arrange for end-of-life care.

“Steve didn’t want to die in a hospital on a machine,” Lynne says. “He was going to go home, whatever that looked like.” 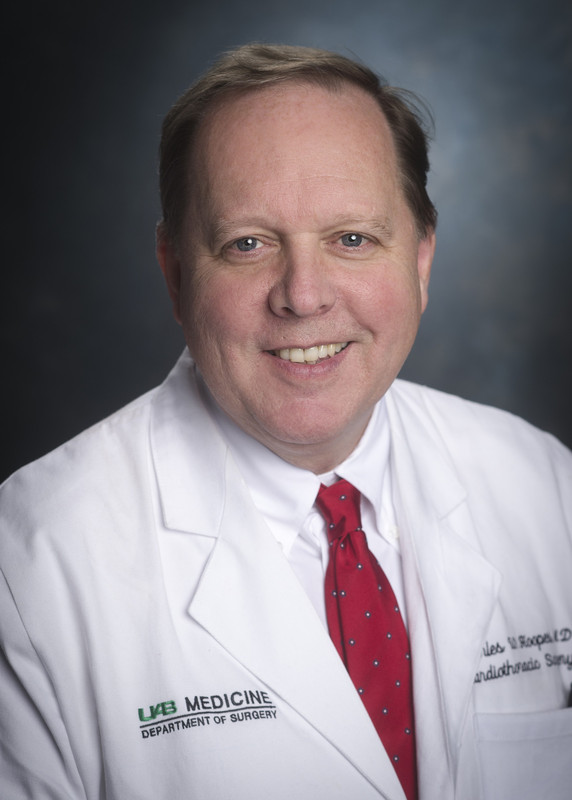 While the family was in meetings with the palliative care team, Steve received word that he had been referred to the University of Alabama at Birmingham Comprehensive Transplant Institute for a double-lung transplant. On Nov. 13, 2021, the CTI sent an air ambulance to fly Steve to UAB.

“It happened so quickly that it felt like getting hit by a tornado,” Steve remembered.

Charles Hoopes, M.D., his surgeon and the CTI surgical director for Thoracic Transplant, notes that Steve’s situation — known as a “salvage transplant” — comes with unique challenges.

“A transplant is more complicated when a patient has no history of chronic disease, has no long-term relationship with the medical team and is not expecting it,” Dr. Hoopes said. “Psychologically, it’s a challenge.”

“Most people who receive organs are sick, and they’re able to mentally adjust to the fact that they’re sick,” she said. “We went from sick to dying really fast. It’s an adjustment.”

The family faced another hurdle in December 2021, when they were told that donor lungs were available, but then the transplant did not proceed.

“The good people at UAB had become our family and everyone was disappointed, but I knew that the good Lord kept me there for a reason,” Steve said.

The couple spent Christmas and New Year’s at the UAB CTI, and Steve doubled down on his efforts to be in the best shape possible for his transplant.

Hoopes says Steve’s efforts positioned him for a successful transplant.

“A transplanted heart beats on its own, but lungs require that the patient participate by breathing,” he said. “Physical therapy is critical prior to the operation.”

“They kept me asleep for the first day but woke me up on February 1, which is my birthday,” Steve said. “I was able to stand up on my own and walk 1,600 feet.”

Hoopes notes that, while Steve struggled during his recovery, his motivation to succeed was never in doubt.

“He walked and fought to stay off a ventilator,” he said. “The brain interprets difficulty breathing as a life-threatening situation, but Steve pushed through it.”

When Lynne worked for the county clerk’s office issuing drivers’ licenses, she encouraged residents to become organ donors. In the past year, the couple has had the unexpected opportunity to witness transplantation from the perspective of both the donor and the recipient.

“Last year, our daughter-in-law’s brother was killed by lightning and was an organ donor,” Lynne says. “This year, Steve received a double-lung transplant.”

Steve is looking forward to the day when he can get back to working, fishing and hunting; but he is not taking his new lungs for granted.

“The reason I got into shape was because of the donor’s sacrifice,” he said. “I prayed for the donor and their family, and I hope they realize that their loved one’s sacrifice saved my whole family.”

Lynne is documenting their day-to-day journey and one day will read it to Steve.

“There have been terrible nights and long days; but marriage is for better or worse, right?”

You can register now to be an organ donor upon death by visiting Legacy of Hope.