ADHD kids at increased risk when crossing the street

Parents of children with ADHD may want to delay time when kids can cross by themselves, say UAB researchers. 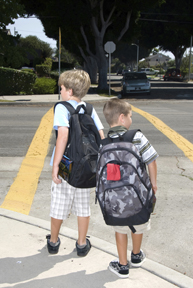 Children with attention deficit/hyperactivity disorder (ADHD) are at increased risk of being hit by a vehicle when crossing a street, according to new research from the University of Alabama at Birmingham.

The findings, published July 25, 2011, in Pediatrics, indicate that children with ADHD don’t process information as well as non-ADHD children and tend to make incorrect decisions on when to begin crossing a street to a greater extent than non-ADHD children. According to the National Center for Injury Prevention and Control, one of the leading causes of unintentional injury in middle childhood is pedestrian injury.

“The kids with ADHD in our study displayed the behaviors parents want to see – they stopped at the street and looked both ways. But that doesn’t mean they are ready to cross a street by themselves,” said the study’s first author, Despina Stavrinos, Ph.D., assistant professor in the UAB Injury Control Research Center.

As a result, the researchers suggest parents of children with ADHD may want to delay the time when their children are allowed to cross a street by themselves.

The UAB study involved 78 children ages 7 to 10 years old, 39 with ADHD and 39 without. The children completed 10 simulated street crossings in UAB’s Youth Safety Laboratory, which houses a virtual street environment. The simulator shows a typical street scene, with vehicles approaching on monitors from both left and right. Children are asked to gauge the proper moment to safely cross the virtual street and then step off the curb, initiating the cross.

Stavrinos said children with ADHD did the right things when approaching a street – waiting to cross and looking left and right before crossing – in a manner similar to the non-ADHD control children.

“However, at some point in the decision-making process, things appear to go awry, resulting in a dangerous crossing environment,” Stavrinos said. “It seems children with ADHD are attempting to properly assess the environment’s safety, but are failing to process the information in a manner that enables them to cross safely.”

The children with ADHD picked shorter gaps between oncoming traffic, had more “close-calls” with traffic and a shorter amount of time left to spare upon reaching the other end of the crosswalk.

“Proper executive functioning would entail recognizing the speed of the oncoming vehicle, the interval between vehicles and the speed of the walker as they cross the street,” Stavrinos said. “Children with ADHD seem to be behind their typically developing peers in these sorts of computing skills.”

Stavrinos says continued practice might be valuable in teaching the child with ADHD how to recognize a safe gap in traffic.

The study was supported by the Society for Public Health Education, National Science Foundation, Center for Child Injury Prevention Studies at The Children’s Hospital of Philadelphia, Society for Pediatric Psychology and UAB Injury Control Research Center.