UAB researchers say there is a Sepsis Belt that aligns with the well-known Stroke Belt. A new grant will help them ferret out its mysteries. 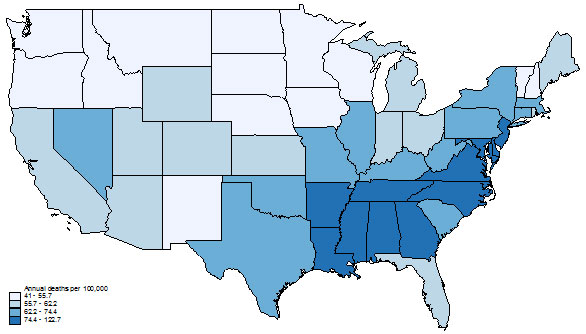 You’ve heard of the Stroke Belt. Stretching across the American Southeast, it spans 11 states from Louisiana to Virginia, where death from stroke is much higher than in other regions of the country.

The term Sepsis Belt might be a new one, though. Sepsis, a severe illness in which the bloodstream is overwhelmed by bacteria, also appears to have a belt of its own. According to University of Alabama at Birmingham emergency physician Henry Wang, M.D., the death rate for sepsis is much higher in one geographic region of the United States — the same region in which stroke is most prevalent.

“In 2010, we examined death rates from sepsis across the United States,” said Wang, associate professor and vice chair for research in the UAB Department of Emergency Medicine. “Laying it out on a map, we saw that the states with highest sepsis mortality formed a cluster in the Southeast United States, closely mirroring the appearance of the Stroke Belt.”

Wang says sepsis is responsible for 750,000 hospitalizations and some 200,000 deaths in the United States each year, about the same as for heart attack and breast cancer. Sepsis is triggered by infections such as meningitis or bacterial pneumonia, and can lead to shock, organ failure and death.

“There are a host of possible causes for this geographic cluster,” said Wang. “Possibilities include pre-existing medical conditions, health behaviors, diet, genetics and even the environment and air pollution.”

Wang will use data from REGARDS (Reasons for Geographic and Racial Differences in Stroke) study, a large, long-term study of the Stroke Belt, funded by the federal government and based at UAB.

“We’ll be able to make extensive use of the REGARDS infrastructure, with access to information from the more than 30,000 people enrolled in that project,” said Wang. “With that wealth of information, we will be able to identify the characteristics of persons most likely to be hospitalized for sepsis. This information will may lead to strategies to prevent its onset.”

“Sepsis treatment is complex, dealing with disruption of blood flow, organs shutting down and shock,” he said. “Our current best course of action is to prevent sepsis from occurring in the first place. We hope our new research endeavor will lead to novel ways to prevent this disease and its effects.”