New research hopes to simplify and clarify the risk someone runs from being obese. 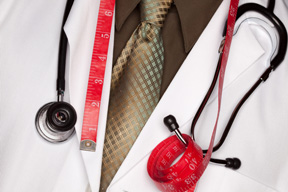 Obesity is the fifth leading cause of death in the world; according to the World Health Organization, more than 65 percent of the world’s population lives in countries where obesity is a leading contributor to death. But defining obesity is not simple. Body mass index relies on a complicated formula, and a high BMI might not accurately reflect someone’s risk of death.

Obesity expert David B. Allison, Ph.D., distinguished professor in the University of Alabama at Birmingham’s School of Public Health, and scientists from the University of Alberta studied the Edmonton Obesity Staging System, a five-stage scale (0-4) that considers BMI, other illnesses and functional status of people who are obese to rank the consequences of excess weight.

In a study published in the Aug. 15, 2011, edition of the Canadian Medical Association Journal, the investigators report that using the EOSS could be a way for physicians to reliably predict an overweight or obese patient’s risk for death and the degree to which they require medical care.

The researchers studied data from the U.S. National Health and Human Nutrition Examination Surveys from 1988-1994, and 1999-2004, with mortality follow-up through the end of 2006.

“The powerful predictability of the EOSS bodes well for the future use of this system,” Allison says. “Most importantly, it shows that EOSS can potentially lead to differential treatment decisions, which in turn may lead to better outcomes.”

This is good news for both doctors and patients. Arya M. Sharma, M.D., who first proposed the classification system and is the study’s lead author, says the importance of EOSS is that it emphasizes individualized treatment needs depending on how sick or at-risk the patient is.

“With EOSS, physicians can rapidly assess needs, and just as importantly, prioritize treatment resources, such as surgery. The potential for significantly improved patient outcomes and optimizing health services is huge,” says Sharma.

Allison believes that because higher EOSS scores were a strong predictor of increased death rates, they could eventually lead to a clearer determination of medical coverage for patients, with a more evidence-based and effective classification system.

“I think it’s plausible that this system or something similar will be put into place to better determine who needs priority in receiving obesity treatment,” Allison says.