by Jim Bakken
UAB researchers have published a paper showing a link between micro-organisms and a type of kidney disease.

UAB researchers Bruce Julian, M.D., and Lea Novak, M.D., have co-authored a paper outlining a possible cause of IgA nephropathy, an inflammatory kidney disease that can lead to kidney failure. 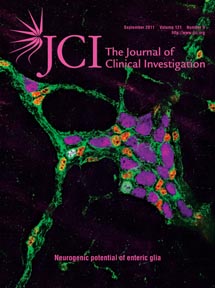 The findings, published in the September issue of the Journal of Clinical Investigation, showed that IgA nephropathy — the most common form of glomerulonephritis, or inflammation of small blood vessels in the kidney — could be linked to an overzealous response against micro-organisms that normally live in the gut.

Individuals with IgA nephropathy, also known as Berger’s disease, have kidneys that leak blood and sometimes protein into the urine. The condition is caused by the over-accumulation of IgA — an antibody that helps rid the body of microbes — in the kidneys. It is not known what causes this.

The research team found that over-expression of a molecule called BAFF — also known as BLyS — helps IgA nephropathy develop in a way that is dependent on the immune response to particular gut micro-organisms called commensal flora. If those micro-organisms are eliminated, the researchers found, many features of the disease disappear.

This research not only provides clues to the cause of IgA nephropathy, but it also may lead to insights on how to treat the disease, investigators say.